In the wake of Trump’s endless tirade against Pakistan, Russia provided explicit gestures of support in favour of Pakistan. In August 2017, Russian Presidential Envoy to Afghanistan Zamir Kabulov censured Trump’s South Asia strategy and insisted that Islamabad is ‘a key regional player to negotiate with. Putting pressure (on Pakistan) may seriously destabilise the region-wide security situation and result in negative consequences for Afghanistan’.

The US strategy against Pakistan has created an opportune vacuum for Russia to reshuffle the positions of its strategic allies in its favour. The growing fissures between the US and Pakistan provide Russia with a golden opportunity to strengthen its multifarious ties with Pakistan and thereby to further expand its influence in the region and beyond. History is a testament to the fact that such opportunities become available to states once in a decade or perhaps centuries and those nations which only focus on immediate needs at the cost of geostrategic and long-term objectives miss such opportunities.

In this respect, Pakistan figures as a key regional player that can be detected on Russia’s radar for regional alliances. Donald Trump stated that ‘The United States has foolishly given Pakistan more than 33 billion dollars in aid over the last 15 years, and they have given us nothing but lies and deceit, thinking of our leaders as fools’. After Trump’s unabated anti-Pakistan policy statements, Pakistan axiomatically finds itself in the unquestioning need of alternative and virtually equal powerful ally. The situation potentially brings a series of opportunities for Russia: to enhance its regional influence, to get active engagements in South Asia, to expand and consolidate its alliance and to gain economic benefits by the substantial symbiosis with Pakistan.

While Russia-Pakistan full-scale military cooperation gives the appearance of close and stable relations between the two, on the contrary, it has camouflaged poor economic interdependence and a lack of strategy for bilateral cooperation

Russia seems unclear and reluctant to fill the vacuum. There could be various reasons. To start with, due to uneasy economic situations in both countries, they have limited resources for mutual investments and joint business projects.

The second reason for concern is Russia’s virtually non-transparent and unpredictable moves towards Pakistan. Under the third president Dmitry Medvedev (2008-2012), Russia’s policy toward Islamabad was transparent. In 2008, Russia’s Foreign Policy Concept declared Pakistan as one of the key regional powers that Russia intended to develop relations with on bilateral and multilateral levels. 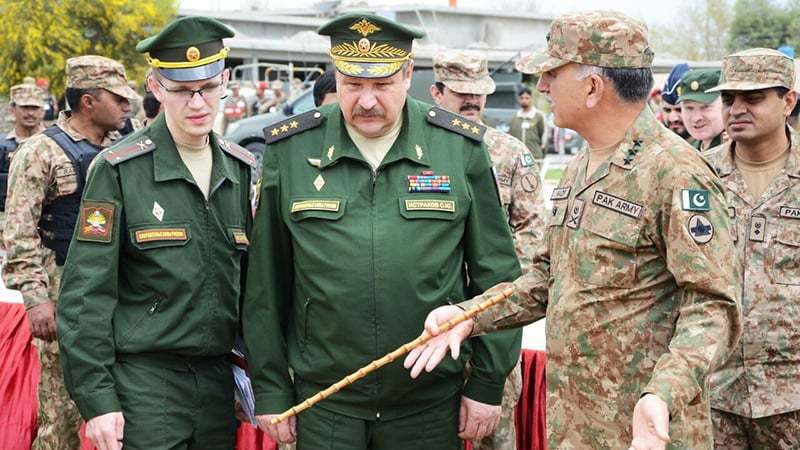 Putin’s return to the Kremlin in 2012 led to changes in Russia’s policy in South Asia. It seemed to be less transparent and predictable. The first indication of this was a short notice cancellation of the Dushanbe Four summit in Islamabad in 2012 due to President Putin’s inability to visit Pakistan. Shortly after that, this platform ceased to exist. After that, combined military exercises of Russia and Pakistan in 2016 provided a much-needed spark to the bilateral relations. The helicopter deals and second friendship military exercise in 2017 are significant additions to mutual cooperation. However, these developments do not appear enough to detect the exact or explicit position of Pakistan in Russia’s foreign policy framework.

While Russia-Pakistan full-scale military cooperation gives the appearance of close and stable relations between the two, on the contrary, it has camouflaged poor economic interdependence and a lack of strategy for bilateral cooperation. These ambiguous developments and lack of clear policy towards Pakistan indicate that the vacuum is hard to be filled by Russia. There is hardly any mention of the current policy.

Russia and Pakistan should focus on less visible, but more critical fields of partnership to start with, formulating the roadmap for bilateral relations and facilitating trade between them. A trusted partnership with both India and Pakistan is possible only if Russia realises and articulates their independent value for itself, makes its policy South Asia-oriented, protects its ties with India and Pakistan from the third countries’ influence, and avoids U-turns and any unpredictability in its regional strategy.