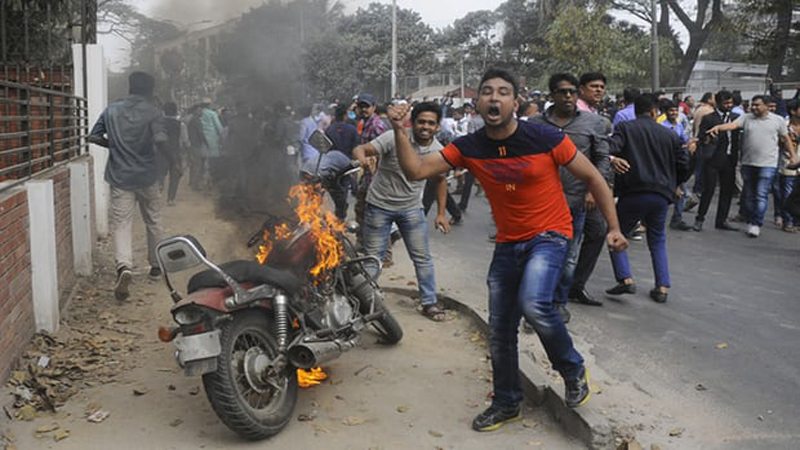 DHAKA: A court in Bangladesh sentenced opposition leader Khaleda Zia to five years in jail on Thursday after convicting the two-time former premier of embezzling money meant for an orphanage.

Judge Mohammad Akhteruzzaman convicted Zia and sentenced her to five years in jail in a crowded courtroom, an AFP correspondent at the scene said. Following the sentence, Zia was taken to a Dhaka prison under heavy security.

The conviction means that Zia, the archrival of the current prime minister, could be barred from running in December national elections. Defense lawyer Mahbubuddin Khokan said Zia had ordered him to appeal against the decision. “This is unbelievable,” he said. “I am confident she will come out of jail.”

Violent clashes broke out between security forces and protesters in the Bangladesh capital ahead of the verdict.

Police fired tear gas at thousands of opposition activists who defied heavy security to escort the car taking Zia, a two-time former prime minister, to a Dhaka court for the verdict.

The private television station Somoy said at least five police officers had been injured and two motorcycles torched during the clashes that broke out several kilometres from the court premises.

Zia, leader of the opposition Bangladesh Nationalist Party (BNP), is charged with embezzling $252,000 from a trust created for an orphanage and faces life in prison if convicted by the Dhaka magistrates’ court.

She has consistently denied the charges, insisting ‘not a penny’ was stolen and saying the legal action was politically motivated.

Police had banned street protests and rounded up thousands of opposition supporters in a crackdown ahead of Thursday’s ruling.

A senior officer told AFP more than 5,000 police had been deployed in Dhaka and the streets of the usually congested capital were almost empty of cars early Thursday.

“We have stepped up security in the entire city,” Dhaka police chief Asaduzzaman Mia told reporters outside the court.

Authorities have for days been on high alert for protests in the tense city, where political demonstrations by Zia’s centre-right BNP and its allies in 2014 and 2015 left nearly 200 people dead.

The BNP boycotted 2014 polls in which Hasina was re-elected but is expected to contest the upcoming general election.

Zia, 72, has repeatedly said the charges against her are politically motivated, aimed at excluding her and her family from politics. “This is an attempt to use the court against me, in an effort to sideline me from politics and elections and to isolate me from the people,” Zia told a packed news conference on Wednesday.

BNP spokesman Rizvi Ahmed has said around 3,500 opposition activists and officials have been arrested in a sweep by security forces ahead of the verdict.

Human Rights Watch on Thursday urged the government to stop what it called ‘arbitrary arrests and detentions’.

“The Bangladesh government’s claims to be open and democratic ring hollow as it cracks down on political dissent,” said the group’s Asia director Brad Adams.

“The government has a responsibility to prevent and minimise violence, but it needs to do so in a way that respects basic rights, not flouts them.”