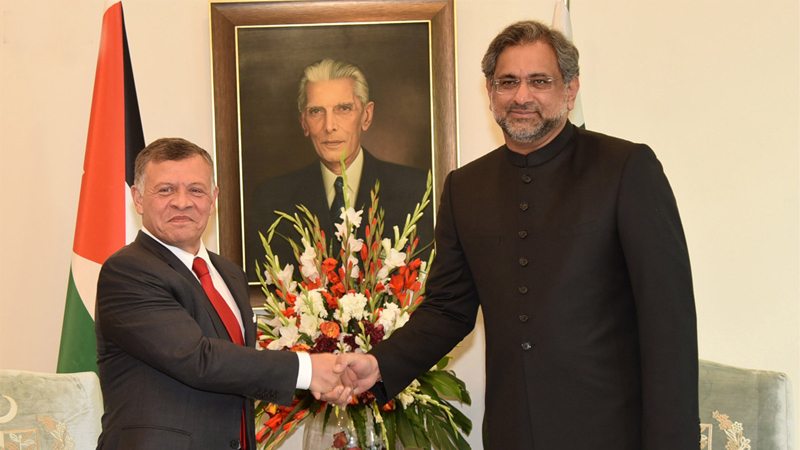 ISLAMABAD: Pakistan and Jordan on Thursday agreed to enhance bilateral trade and investment relations to make the existing US$ 75 million bilateral trade commensurate with the excellent political ties existing between the two countries.

The agreement emerged during a meeting between Prime Minister Shahid Khaqan Abbasi and King Abdullah II Ibn Al Hussein of Jordan here at the PM House. King Abdullah, who arrived here earlier in the day on a two-day visit, held delegation-level talks with the prime minister during which the two sides reviewed the entire gamut of bilateral relations and exchanged views on ways to further expand these relations in a variety of fields.

The two leaders also reviewed regional situation, with particular focus on the Middle East in the aftermath of recognition of Jerusalem by Washington as the capital of Israel, a press release issued by the PM’s Media Office said.

The prime minister expressed Pakistan’s unequivocal support for the just cause of Palestine and reiterated Pakistan’s rejection of the US decision. He also briefed the visiting dignitary on the current situation along the LoC, Pakistan’s counter-terrorism efforts and its commitment towards regional peace and stability.

The two countries on this occasion also signed an agreement in the field of civil protection and civil defence. A memorandum of understanding (MoU) between the Ministry of Housing and Works of Pakistan and the Ministry of Public Works and Housing of the Hashemite Kingdom of Jordan was also signed. King Abdullah II thanked the prime minister for the warm welcome accorded to him and his delegation. The prime minister also hosted a banquet in the honor of King Abdullah II and his delegation.

King Abdullah II is visiting Pakistan after 11 years. His visit is a reflection of the close brotherly relations existing between Pakistan and Jordan. Earlier, he was given a red carpet welcome as he arrived at the Prime Minister’s House here. Prime Minister Abbasi received him and greeted him at the welcome ceremony. National anthems of the two countries were played. The contingents of the armed forces presented guard of honour to King Abdullah II. Pakistan Air Force’s JF-17 Thunder jets also displayed a spectacular fly past while presenting salute to the dignitary. Later, the prime minister introduced the king with his cabinet. The visiting dignitary also introduced his delegation to the prime minister.