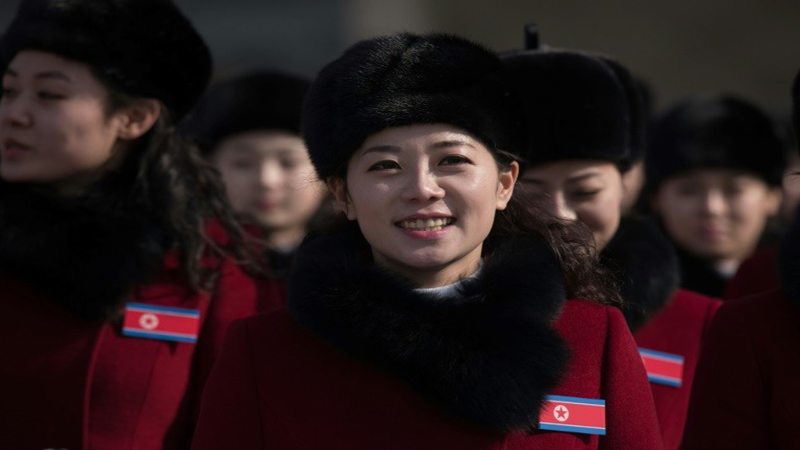 North Korea staged a military parade in Pyongyang Thursday, in a show of strength just a day before the Winter Olympics open in the South.

The nuclear-armed North is on an Olympics-linked charm offensive — sending a troupe of performers, hundreds of female cheerleaders, and the sister of leader Kim Jong Un to South Korea.

But footage posted online from Pyongyang Thursday showed truckload after truckload of soldiers being driven away from the city centre after taking part in the parade, with cheering onlookers lining the streets, followed by tanks and other armoured vehicles.

Unlike the North’s last parade in April 2017 its state television did not show the event live. But a Seoul government source told AFP: “We have learned that North Korea staged a military parade at Kim Il Sung square in Pyongyang.”

Analysts say that with the dual approach, the North is looking to normalise its status as a “de facto nuclear state”, and could be trying to weaken sanctions against it or drive a wedge between the South and its ally the US. North Korea is under multiple sets of UN Security Council sanctions over its banned nuclear weapons and ballistic missile programmes, which have seen it develop rockets capable of reaching the US mainland.

Pyongyang last month announced it would commemorate the 70th anniversary of the founding of its military on February 8 — changing the date from April 25 and switching it to the day before the Games’ opening ceremony in Pyeongchang.

North Korean military parades typically feature thousands of goose-stepping troops and hundreds of armoured vehicles, culminating with missiles rolling through Kim Il Sung Square — the highlight for Pyongyang-watchers who examine them for clues about the progress of its technology.

But none of them were spotted in satellite imagery of rehearsals ahead of the parade, according to respected US website 38 North.

Pyongyang normally invites hundreds of foreign journalists to show off the spectacle to the world but did not do so this time, possibly an indication that it wanted to control how the display was seen — which would be in keeping with the absence of live coverage.

Instead of the parade, state television showed several hours of propaganda in the morning, followed by a movie and footage of past displays, some of it in black and white.

VIPs head south: The North’s high-level delegation for the Olympics is being led by its ceremonial head of state Kim Yong Nam, the highest-level official ever to visit the South, and also includes Kim Jong Un’s sister Kim Yo Jong — an increasingly powerful and influential figure. The delegation will travel by plane on Friday, landing at Incheon airport near Seoul, the South’s unification ministry said.

US Vice President Mike Pence was due in the South later Thursday and is also scheduled to attend the opening ceremony in Pyeongchang on Friday.

That could put him in the same room as Kim Yong Nam at a leaders’ reception beforehand, raising the prospect of senior figures from the two sides meeting after a year in which their leaders traded personal insults and threats of war.

Earlier Thursday Cho Yong Sam, a senior Pyongyang foreign ministry official, was quoted as saying the North had “no intention” of meeting US authorities during the trip.

“We have never begged for dialogue with the US and will never do so,” he said. But his comments did not rule out a meeting — and nor has Pence.

The US vice president has lambasted the North, announcing in Tokyo on Wednesday that the US would impose its toughest sanctions to date on the regime. The US “will not allow North Korean propaganda to hijack the message and imagery of the Olympic Games”, he said. But he left open the possibility of meeting Pyongyang’s representatives. “There may be a possibility for any kind of an encounter with North Koreans,” whether informal or a meeting, he said Thursday before leaving Japan. “We’ll have to wait and see exactly how that unfolds.”