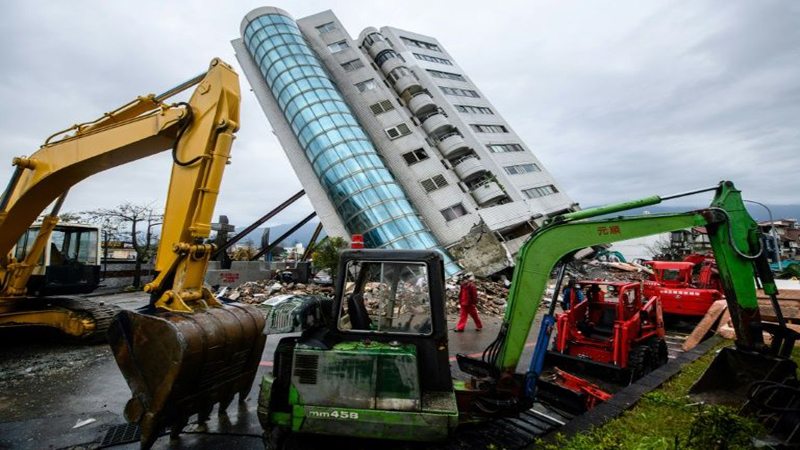 Taiwanese rescuers Thursday braved aftershocks coursing through a dangerously leaning apartment block that was partially toppled by a deadly earthquake, as their search for survivors uncovered two more bodies.

At least nine people were killed and 25 others remained missing after a 6.4-magnitude quake hit the popular eastern tourist city of Hualien on Tuesday, according to a revised toll from the national fire agency.

The powerful tremor left a handful of buildings badly damaged — some of them leaning at precarious angles — as well as roads torn up and hundreds forced to shelter in local schools and a stadium.

The major focus for emergency responders remained the Yun Tsui apartment block where six of the deaths occurred and dozens are still missing.

The lower floors of the 12-storey tower — which also housed a hotel — pancaked, leaving the structure leaning at a fifty-degree angle and sparking fears of an imminent collapse.

Despite those risks rescuers kept going into the building in a desperate search for survivors, but on Thuraday recovered only two bodies — a Chinese mainland tourist and a hotel worker.

Strong aftershocks continued to strike, sending the teams scurrying from the building, only for them to return a little later and resume their grim task.

An emergency responder surnamed Lin said it took 14 hours to free the body of the hotel worker, who was partially trapped between the hotel’s ceiling and floor.

“We saw his hair and were digging for some time,” he told AFP.

All the while they could hear the victim’s mobile phone ringing, he added. The man was later brought out in a white body bag.

A Red Cross worker at the scene estimated that the building had tilted another five percent overnight, adding he had little hope of survivors being found on its lowest floors.

“Floors one to three are all compressed so it’s hard to tell whether there are people,” he told AFP, requesting anonymity.

He said that there was no risk of a gas explosion in the building but the aftershocks and further slippage remained a persistent danger.

Popular tourist spot: The national fire agency said three of those killed were Chinese nationals from the mainland. All were believed to be staying at the Beauty Stay Hotel, which was located on the second floor of the apartment block.

Authorities published a steep drop in the number of missing Thursday afternoon — 58 to 25 — after unaccounted people got in touch with loved ones or officials.

In the apartment block, 10 people remained missing from flats alongside seven hotel guests. More than 260 people were injured in the tremor, the strongest to hit Hualien in decades.