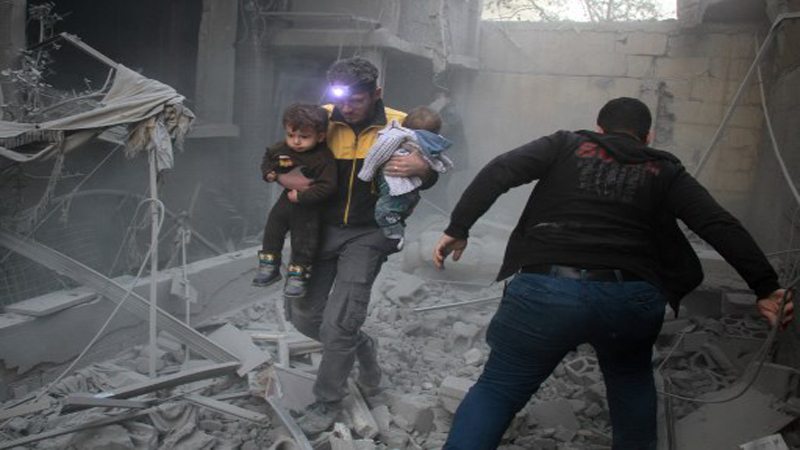 Dozens of civilians were killed by renewed government strikes in a rebel-held enclave near Damascus, where overwhelmed medics were still treating survivors of the Syrian conflict’s bloodiest day in months.

The district of Eastern Ghouta, controlled by rebel factions including Islamists, suffered some of its worst bloodshed in years on Tuesday, when 80 civilians were killed.

For the third consecutive day, regime warplanes returned Wednesday morning for fresh strikes on the enclave, with the death toll climbing to 34 civilians including a dozen children, said the Syrian Observatory for Human Rights.

Among them was the young daughter of Abu Raad, a shell-shocked man from Eastern Ghouta. “Now the rescue workers are searching for my second daughter but can’t find her. What do I do?” he cried.

Tuesday’s toll of 80 dead was “the highest civilian toll in Syria in nearly nine months, and one of the bloodiest days for Eastern Ghouta in several years,” Observatory director Rami Abdel Rahman told AFP. Nineteen children and 20 women were among the dead, and around 200 were wounded, said the Britain-based war monitor. The deadliest raids hit Beit Sawa and Hammuriyeh, the Observatory said.

‘Chlorine’ use: In Hammuriyeh, a young man stared at the bodies of five children, including his younger brother, killed in an air strike.

“I saw them filling up water, and a few minutes later the airplane hit. I came back and found all five dead,” he said.

Civilians had been bracing for more raids as the regime appeared intent on ratcheting up the pressure on Eastern Ghouta, a rebel pocket on the capital’s doorstep.

“Please break up all gatherings and clear the streets,” blared an announcement from mosque minarets in Douma.

Home to an estimated 400,000 people, the Eastern Ghouta region has been included in a de-escalation deal that was meant to bring calm. But the bombardment has increased in recent days, including with suspected chlorine-filled munitions. On Wednesday, French Foreign Minister Jean-Yves Le Drian said “all indications” pointed to the Syrian government’s use of chlorine weapons.

Chlorine is suspected of having been used on two occasions this month alone on Eastern Ghouta. The Organisation for the Prohibition of Chemical Weapons said a fact-finding mission “is investigating all credible allegations”. The world’s chemical watchdog voiced “grave concern” over the new reports.

The US State Department said on Monday it had recorded six suspected chemical attacks in Syria in the past 30 days.

On Wednesday, the Syrian army said it intercepted an Israeli attack on a military position in Jamraya, northwest of Damascus. Jamraya is home to several military positions and a branch of the Syrian Scientific Studies and Research Center, suspected of playing a leading role in chemical weapons production. An Israeli air strike hit the facility in May 2013.

“This morning, Israeli warplanes fired several missiles from Lebanese airspace on one of our military positions in the Damascus countryside,” said an army statement carried by state media. “Our air defence systems blocked them and destroyed most of them.”

The Observatory said an arms depot in Jamraya had been hit, but it could not confirm whether research facilities had been damaged. The US-led coalition battling the Islamic State group said Wednesday it had carried out defensive strikes in the eastern Deir Ezzor region against Syrian pro-regime forces.

Using an alternative acronym for IS, the coalition said it then “conducted strikes against attacking forces to repel the act of aggression against partners engaged in the Global Coalition’s defeat-Daesh mission.”