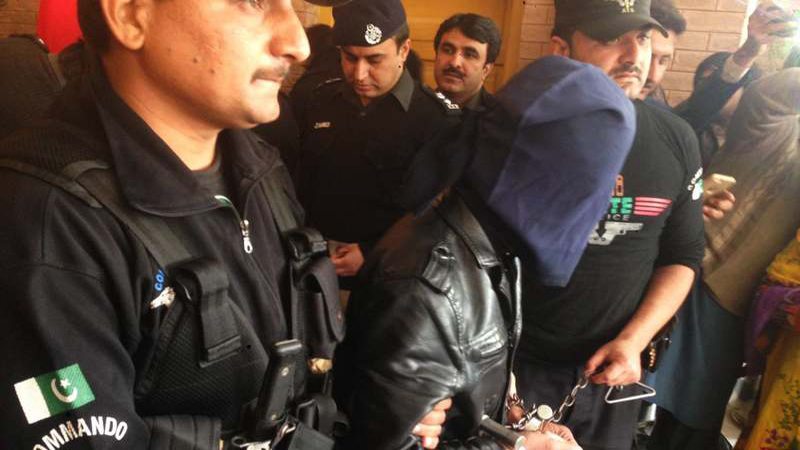 PESHAWAR: A fifteen-year old suspect arrested in connection with the murder of Asma in Mardan Wednesday confessed to killing the four-year old minor girl due to fear of being caught during an attempted sexual assault on January 13.

The accused, Muhammad Nabi, was arrested after a DNA sample of his blood matched the one found on a sugarcane leaf at the crime scene. He is said to be a relative of the ill-fated girl. He worked as a daily wager and was off work on the day the incident took place.

He was presented to the media at the Central Police Offices (CPO) in Peshawar wearing a black leather jacket over black Shalwar Qameez. His face was covered with a blue hood.

“He saw the girl alone outside a local shop at 3pm on January 13 when she asked him to get her a sugarcane from the nearby field. The boy sent her to the field, followed her and took her deep inside the sugarcane field,” Alam Khan said.

The official added that the accused had attempted to rape the minor girl. However, the girl started shouting and this made the boy worried about being noticed as there were many people attending a wedding nearby.

“Muhammad Nabi then strangulated her neck with both his hands and while doing so, he hurt her neck with his nails,” Alam Khan said, adding “When the girl screamed in pain, the accused suffocated her by placing his hands on her mouth and nose.”

The official said that the killer had helped the family in search for Asma when she did not return home. The body was found a day later on January 14.

“We gathered data of at least 350 males of the village and interviewed many people. Sniffer dogs were also used to help find any traces. However, two evidence from the exact spot of the crime scene helped solve the mystery,” he said.

“No male DNA was found elsewhere near the crime scene except the blood stain on the sharp sugarcane leaf and the small piece of sugarcane that was found near the body,” the police official added.

“A total of 243 DNA samples were sent to Punjab Forensic Science Laboratory and a match was hit on 145th sample that was of Muhammad Nabi,” Alam Shinwari added.

The accused had initially denied his presence in the village on the day the girl was murdered.

Alam Shinwari said that the accused had went to see a co-worker and asked him to take his bicycle when police brought sniffer dogs to the village. However, the colleague got suspicious and started asking questions to which Nabi told him of what he had done to the girl.

“Police also arrested the colleague who confessed that Muhammad Nabi had shared information with him. He wanted to make a video of Nabi but said he couldn’t get a chance,” DIG Alam added.

Earlier, Khyber Pakhtunkhwa Inspector General of Police (IGP) Salahuddin Mehsud said that the KP Police faced many challenged but their professionalism helped them solve the mystery case without making any arrests despite tremendous pressure.

“The police high-ups spent the past 25 days in unimaginable stress. It was a blind murder case that took place in a sugarcane field with no CCTV, streetlights and no witnesses at all,” the IGP said.

“We cannot reduce the pain and grief of the victim’s family but we assure them and all residents of the province that KP police were efficiently working to ensure their protection,” he said.

Salahuddin Khan Mehsud added that efforts of KP Police had reduced murders by 25 percent and attempted murders 18 percent in comparison to 2014. Similarly, kidnapping for ransom cases had been reduced by 82 percent, extortion by 78 percent and property related cases by 45 percent. He added that terrorism had come down 73 percent in the same period.