Truly independent and impartial the World Economic Forum (WEF) is not tied to any special interests or groups. WEF’s Annual Meeting at Davos presents a unique once-a-year opportunity bringing together the world’s most prominent politicians, Heads of State and/or government, business and industrial leaders, policy makers, academics and scholars, scientists, philanthropists, social workers, media personalities, etc under one roof to discuss and shape global and regional agendas relating to economics, health, environment, media, security, and a host of other topics. CEOs of multinational corporations mingle with world leaders and A-list celebrities to discuss a range of topics such as the global economy, commodity prices, environmental issues, etc. The Forum produces a series of research reports and engages in a number of initiatives that seek to tackle global challenges through public-private collaboration. Typically, more than 2,000 people are invited to attend, participate, or cover the event.

Prime Minister (PM) Shahid Khaqan Abbasi was the Chief Guest at the event being held since 2002. Pakistan faces a serious crisis of image internationally, the Pakistan Breakfast has been successful in dispelling the negative perception before a very precocious audience. PM Abbasi’s performance was above par, he was on the dot when he said, “There are two Pakistan’s, one is on the CNN and the other is the reality” reflecting that at times the international media has shown bias in very quickly disseminating any news that paints Pakistan is a negative manner. The many positive and good aspects of Pakistan are unfortunately overlooked or misreported many times. The PM commented that the huge gap between perception and reality was bridged to a large extent by forums such as the Pakistan Breakfast. The guests at the event meet with senior Pakistan leaders in every walk of life to exchange views with a world audience in a very candid manner.

The global village has become increasingly inter-connected and fast-paced with technological breakthrough, demographic shifts and political transformations having far-reaching societal and economic consequences

People from at least 35 nations were in attendance numbering at least 250 braving the early morning cold at what has now become the traditional venue, the Steigenberger Belvedere. Much before the PM had arrived the hall was full to its capacity at 8.00 in the morning. PPP Chairperson Bilawal Bhutto’s presence, made even better was graciously acknowledging by PM Abbasi at Breakfast 2018, democracy was the winner and was acknowledged as such by those who attended the function. The Pakistan Breakfast is meant to project a Pakistani’s soft and positive image and as an attractive venue for investment. Considering that in 2017 the Breakfast with Gen (Retd) Raheel Shareef the Chief Guest was a mega hit, Breakfast 2018 was a very special occasion, matching if not surpassing last year’s success, with positive feedback and enthusiasm by attendees.

Questions were raised in 2017 about the direction in which Pakistan was heading in as a democratic entity, this time around the event progressed smoothly in a totally non-controversial manner, appreciated very much by the Davos crowd. The PM spoke in a very frank and forthright manner about the challenges facing Pakistan, the potential and opportunities for investment. Guests from Singapore, the USA, UK and Japan were especially interested about the security challenges being faced by Pakistan and how it could affect regional stability. The optimism and confidence displayed by PM Abbasi while elucidating Pakistan’s future outlook and in answering some very direct and probing questions in a totally unruffled manner was appreciated and received positively by the gathering of a very knowledgeable crowd. 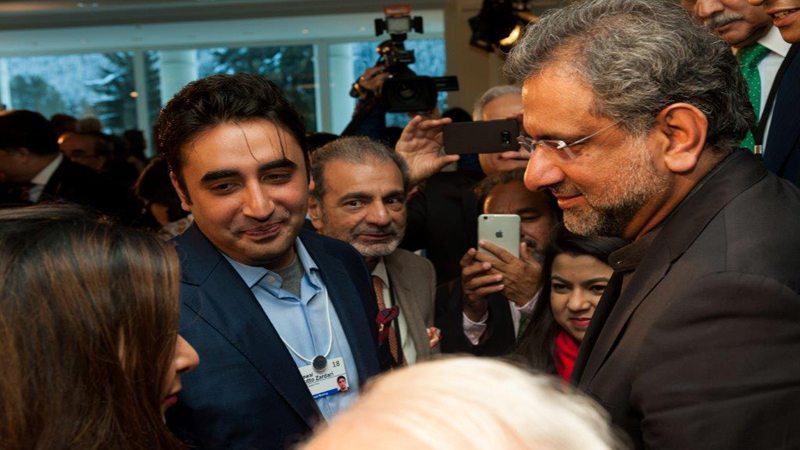 Another important aspect of the Pakistan Breakfast is that it has now become a platform for people of various walks of life to get to know each other and interact in a closed and informal setting. With participants being heads of mutual funds, big conglomerates, chartered accountants, and notable social celebrities and media owners, the Pakistan Breakfast succeeded in portraying a strong message about Pakistan’s positive image.

Davos presents a huge potential for Pakistan, unfortunately it has never been adequately represented at this forum on a consistent basis. In contrast the Indians have a contingent of over 200 top entrepreneurs at Davos, promoting their country and selling their wares. The global village has become increasingly inter-connected and fast-paced with technological breakthrough, demographic shifts and political transformations having far-reaching societal and economic consequences.

With the world becoming so fluid and changeable, leaders will have to share real-time insights and innovations on how to best navigate the future and inter-act positively on a plethora of issues. While a Pakistani Head of State or of Government needs to represent Pakistan Davos every year, private sector participation also needs to be drastically expanded if we are to take advantage of commercial opportunities that can be networked in Davos and government-to-government interaction without the restraints shackles of red-tapism and protocol.

Where else would the PM have had an opportunity to hold discussions with so many top executives of global leader companies and organisations, except in Davos?