Like every year, the government and the people of Pakistan are observing February 5 as the Kashmir Solidarity Day with the twin purposes of reiterating support for the oppressed people of Indian Occupied Kashmir and to draw the attention of the international community towards the brutalities of Indian security forces against Kashmiris who are demanding freedom.

The federal government has done a good job in declaring public holiday on February 5 so that the people can fully observe the Kashmir Solidarity Day by organizing and taking out processions and rallies in support of their Kashmiri brethren struggling for decades together for securing their fundamental right of self-determination.

India occupied the valley of Jammu and Kashmir in October 1947 after the Hindu Maharaja announced accession to India through an illegal instrument. One can sell land but not the people living on that land. But the Hindu Maharaja had sold the people of valley of Jammu and Kashmir and the international community had remained a silent witness to this wholesale selling of the Kashmiris then and continues to be looking the other side criminally and regretfully even now. 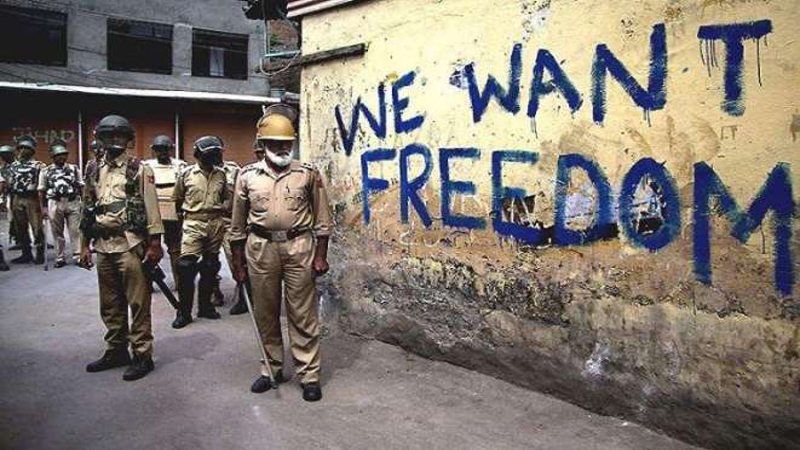 It is a bitter as well as quite regrettable reality that Kashmir dispute remains on the UN agenda as unresolved for a very long period and at the same time, the continued silence of the international community in this respect is also deplorable. Even when the founding day of the United Nations was observed on October 24 throughout the world and its achievements were highlighted last year, there was no mention of unresolved and lingering Kashmir dispute and any reiteration for its peaceful solution by granting the Kashmiris their birth right of self-determination in accordance with UN resolutions and India’s commitment. In fact, unresolved Kashmir dispute remains a black spot on the face of the world body.

It is not comprehensible as to why the world body as well as the international community remains unmoved by the sacrifices of Kashmiris. Perhaps, there are some invisible forces which are playing the dirtiest game by letting the Kashmir dispute remain unresolved on the UN agenda .The history of the world body is replete with its achievements of resolving the disputes within months or even in weeks and needless to mention that all this has been possible only when these some invisible forces wanted that to happen. Whenever these invisible forces want to resolve something,, they simply give signal to the international community and all UN members including its five permanent members, and it happens straightway.

India, no doubt, is a big country, big democracy and it is also committing the biggest crimes and human rights violations in its occupied Kashmir and continuing committing all sorts inhuman treatment, oppression and oppression.

Pakistan has all along been supporting just indigenous, unarmed struggle of the Kashmiris at all international forums urging upon the international community to open their eyes and see the Indian state organized terrorism in held Kashmir and play their positive and constructive role in peaceful solution of Kashmir dispute. Pakistan has been and will continue to extend political, diplomatic and moral support to the Kashmiris’ struggle for securing freedom from Indian occupation and exercising their right of self-determination and deciding their future themselves. Resolution of Kashmir dispute is key to stable peace, prosperity and prosperity in South Asia. Continued denial of right of self-determination to Kashmiris and even not holding bilateral talks for resolving linger Kashmir dispute peacefully has exposed the so-called democratic face of India.

By observing yet another Kashmir Solidarity Day on February 5, people of Pakistan hope to highlight Kashmiris ongoing peaceful struggle for freedom from Indian occupation , wake up the somehow sleeping conscience of the international community and human rights organizations and bodies all over the globe and sensitize the lingering unresolved Kashmir dispute on the UN agenda .

Kashmiris are bound to be free from forced Indian occupation sooner or later. The world conscience may suddenly wake up some day, come up in open support for struggling Kashmiris and pressurise India to let the Kashmiris have what is their birth right to decide their future themselves. The day is not far when not only people of Pakistan but also the international community at large will be supporting the Kashmiris ongoing freedom struggle.