PPP will form next government in Centre and all provinces: Zardari 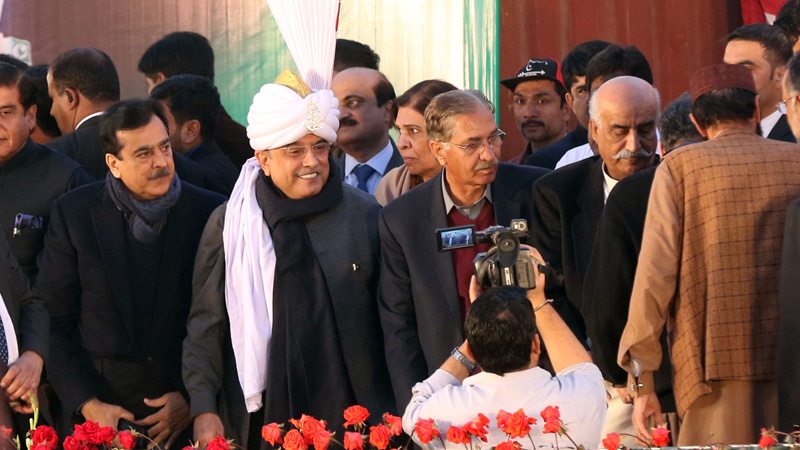 LAHORE: Former president Asif Ali Zardari said on Monday that the Pakistan People’s Party (PPP) would form the next government after winning the 2018 general elections.

He was addressing a public rally organised by the Pakistan People’s Party (PPP) in Lahore to mark the Kashmir Day. More than 10,000 people attended the rally.

“I can topple the Sharifs’ governments, but we will only do so through democratic ways. I am confident that the next elections will be free and fair as the Parliament has passed a bill to stop them from steeling people’s mandate again. The PPP will succeed in all the provinces, including Punjab, Balochistan and Khyber Pakhtunkhwa,” he said.

He said that the PPP was the only party that had the ability to resolve the problems created by the Sharifs.

“I toppled the Nawaz League government in Balochistan by ending their fear and encouraging the Baloch leaders to develop their own leadership. Remember that I did this. Bilawal will go to Parliament to serve the people,” he said.

“Nawaz Sharif is a national thief. He should not be forgiven for stealing the country’s wealth. He also stole the mandate of Pakistan in 2013 elections. I pray to Almighty Allah to grant the people freedom from the Sharifs,” he said. He said that the Sharifs had no idea about the capacity of China Pakistan Economic Corridor. “They just think that it is a tool to obtain loans and build roads and run trains,” he said.

“The Sharifs never understood what democracy is. They have never strengthened it. Instead, they destroy it to empower themselves,” he said. He said that Nawaz Sharif followed the chaos theory, once followed by Hitler, to get hold of resources and deny the people their rights.

He said that the Sharifs did not care for the plight of Kashmiris. “They just want to secure their rule. They respected the Kashmiris by naming their residence Jati Umra,” he said.

He said Rajiv Gandhi was ready to resolve Kashmir issue after holding talks with Benazir Bhutto, but he was assassinated. “Later, PPP government also held talks with Indian PM Manmohan Singh on the Kashmir issue,” he said.