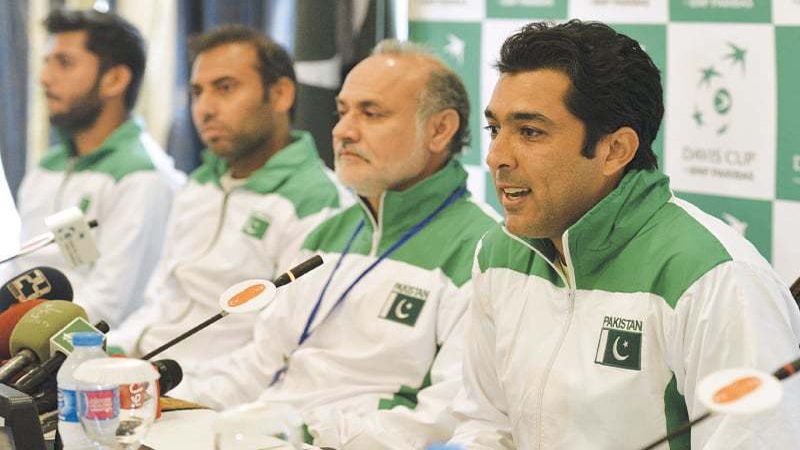 ISLAMABAD: The Davis Cup Asia-Oceania Zone Group-I tie between hosts Pakistan and South Korea will commence at the grass courts of Pakistan Sports Complex here from Friday (today). Expressing his surprise over the decision of Pakistan Tennis Federation (PTF) to not include a fifth player in the Pakistan Davis Cup team for the tie against South Korea, ace player Aisamul Haq Qureshi has said that the national team will play aggressive game against the opposition in the two-day contest. Aisam, non-playing captain Hameed-ul-Haq and other team members including Aqeel Khan, Abid Ali Akbar and Muzammil Murtaza said that they have done a lot of hard work for the South Korea clash and would do their best to win it.

Aisam, who recently played the men’s doubles quarter-final at the Australian Open, said Thursday that he had no idea why the PTF did not add a fifth player in the squad. “Any of the talented junior players would have been given a chance to represent the country in this prestigious event,” he said. Talking about Pakistan’s chances of winning the clash, he said that on paper the Korean team was better than Pakistan as all of their participating players had world rankings. “But we as hosts should take advantage of the grass courts as Pakistan players are better than the Koreans on this surface,” said Aisam. He said that International Tennis Federation’s new rules for Davis Cup to reduce the match from best of five to best of three would also help the Pakistani squad.

Similar views were expressed by top national player Aqeel who said that he had been getting training for the last three weeks for the Korean tie. “We will try our best to win this contest and feel confident about it due to our sound preparations,” he said and added that Aisam’s international exposure would help Pakistan to do well. Non playing captain Hameedul Haq said that though the Koreans were better than the hosts on paper as one of their player is ranked world number 170, the Pakistan team could give them very tough time. Meanwhile, the Korean team comprising Jae Sik Kim, Youngseok Kim, Minjong Park, Yongkyu Lim, Soonwoo Kwon and Seongchan Hong also expressed confidence about winning the tie. Korean captain Sik Kim said that his team had done a lot of hard work for the Pakistan clash and he was hopeful of producing better results. “Pakistan team comprises experienced players and so are we, therefore we are expecting great matches.” He said that his team included talented young players who would be focussing on the singles.