* Over a dozen others injured as 6.1-magnitude earthquake sparks mass panic across country * Epicentre of earthquake is 35 kilometres south of Jarm in Afghanistan 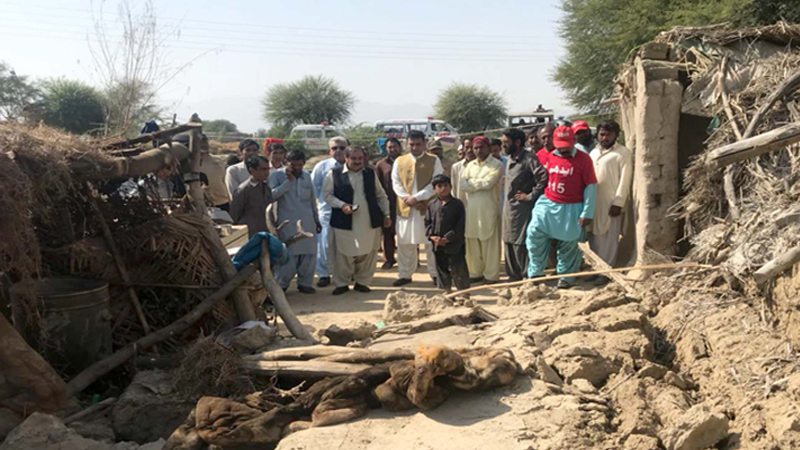 ISLAMABAD: Two people, including a minor girl, were killed and at least 15 others injured as a 6.1-magnitude earthquake jolted various parts of the country on Wednesday.

According to the United States Geological Survey (USGS), the epicentre of the 6.1-magnitude earthquake was 35 kilometres south of Jarm in Afghanistan. The depth of the quake was estimated to be 191.2km, USGS added.

Jarm was hit by a devastating 7.5 magnitude quake in October 2015, triggering landslides and flattening buildings, killing more than 380 people across the region. The bulk of the recorded casualties were in Pakistan, where 248 people were killed, including 202 in Khyber Pakhtunkhwa (KP), and more than 1,600 injured.

Following the quake, officials dispatched teams to Balochistan and KP to assess reports of damage, but the National Disaster Management Authority “does not expect serious losses”, a spokesman said.

In Lasbela, a girl died when the roof of her house collapsed during the shocks. Nine members of her family received injuries.

In Swat Valley, a visitor in a local hotel passed away due to a heart attack as a result of jolts in the building.

According to Lasbela Deputy Commissioner Shabir Ahmed Mengal, rescue teams were dispatched to affected areas. Several villages in Balochistan felt the tremors of the quake, the deputy commissioner added.

“The injured have been rushed to a nearby hospital for medical treatment. An emergency has been declared in all hospitals,” Mengal said.

In Peshawar, Lahore and Parachinar, panicked locals ran out of their homes and came out onto the streets as the quake’s tremors were felt.

Four girls received minor injuries at a primary girls school in Peshawar during a rush to evacuate the premises, Rescue 1122 sources told a private news channel. The girls were rushed to Lady Reading Hospital for treatment.

In Landi Arbab, a village near Peshawar, two children were injured as they were running out of their school in panic, Peshawar District Nazim Muhammad Asim Khan told the news channel.

A control room has been established and emergency services activated by the Chitral deputy commissioner to aid those affected by the quake.

In Islamabad, the windows and doors of the Supreme Court shook during the quake.

Chief Justice of Pakistan Mian Saqib Nisar, who was hearing a case at the time, told observers and lawyers present in the courtroom to remain seated as the “earthquake would subside after the initial shocks”.

Cellphone signals were temporarily disrupted in Islamabad and Peshawar due to the quake.

Afghanistan is frequently hit by earthquakes, especially in the Hindu Kush mountain range, which lies near the junction of the Eurasian and Indian tectonic plates.

Aid agencies have stressed the need for greater disaster preparedness in the war-torn country, which remains extremely susceptible to recurring natural disasters such as floods, earthquakes and landslides.

But deteriorating security has seen international NGOs such as the Red Cross and Save the Children downgrade their operations across the country, making it even more difficult to deliver crucial help to its most vulnerable citizens.

Scientists have warned of a significant increase in the occurrence of potentially deadly earthquakes in 2018.

The assessment was made on the basis of the Earth’s movement data, which shows a significant uptick in earthquakes after a certain period of slowdown in the Earth’s rotation. According to the report, geophysicists are able to measure the rotational speed of Earth with extreme precision, calculating slight variations on the order of milliseconds.

Geophysicists believe Earth’s rotation is cyclical, slowing down by a few milliseconds per day then speeding up again, a geologist Trevor Nace said in the report.