Stop extrajudicial murders in the name of law and order

We as citizens shall not accept extra-legal murders by law enforcement agencies, no matter how heinous the accused person’s offences

The recent wave of extrajudicial murders and forced disappearances has reached its zenith across Pakistan. The recent extrajudicial killing of Naqeebullah Mehsud in Karachi has upset rights groups across Pakistan. The Joint Investigation Team (JIT), formed to probe into the incident following the suo moto notice by the Supreme Court of Pakistan, revealed in its preliminary findings that the incident staged by former SSP Malir was fake and unlawful.

There are many other incidents wherein law enforcing agencies extra judicially murdered innocent people in the name of law and order across Pakistan. These agencies across Pakistan, in recent times, have had adopted a shorter way of getting rid of an investigation by staging fake encounters and, in other ways, forcefully taking people in custody which could be termed as forced disappearance.

It appears there are two forms of extra-legal killings. Firstly, the killing of an alleged accused person in police custody after getting physical remand from the court, and secondly, a much serious and alarming way in which an alleged suspect is killed in the name of maintenance of law and order. Apparently, across Pakistan, these mentioned forms are commonly practiced by the law agencies to get rid of investigation processes. It is also fair to state these mentioned practices are an easier way for the law enforcing agencies to fulfil their duties to show their performance to their bosses. In Pakistan, a judicial inquiry into the death in custody doesn’t take place at all, and the same applies to the other form.

The recent murder of Naqeebullah received overwhelming media attention. All segments of society forced law enforcing agencies to take serious action against police officers who staged the fake encounter. Another such incident took place last year in Lahore wherein a 14-year-old juvenile was killed by the police who was in custody on physical remand.  He and his whole family were booked into the criminal case by Sabzazar Police Station, Lahore.

The judicial inquiry into the death in custody of police was ordered by the District and Sessions Judge, Lahore by virtue of Section 176 of Criminal Code of Procedure. The police until today has not bothered to assist the judicial magistrate that has been given the mandate of conducting the judicial inquiry. In another instance, a young lad from Lahore was killed by the Township police.

In 2017,a recently published report by the Home Department of Punjab revealed that almost 200 such incidents took place across Punjab wherein more than 2000 people killed those who were under the custody of the police or were proclaimed offenders. 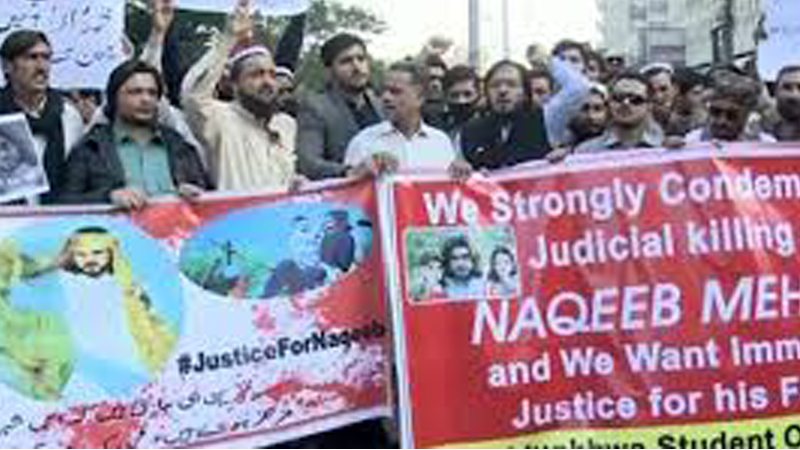 It appears that the notion of staging encounters across Pakistan is well accepted by the police and other law enforcing agencies for the reason that it is an easier way of getting rid of desperate and hardened criminals. Furthermore, encounters are easier because it is difficult to gather evidence to ensure a conviction. It is in the knowledge of the writer that the police defend their practice of staging encounters with an argument that they only kill hardened or criminals who have committed heinous crimes such as rape, armed banditry, multiple murders, kidnapping.

The issue, which is to be addressed by the incumbent government, is to develop a mechanism wherein police should have the resources, training, equipment, and encouragement to act professionally instead of leaving Pakistanis to rely on favours and bribes to seek justice. We as citizens shall not accept extra-legal murders by law enforcing agencies, no matter how heinous offence(s) the alleged accused person had committed.

The writer is an advocate based in Lahore, and he can be reached at greenlaw123@hotmail.com