What makes Pakistan difficult for minorities?

Since  the1956, Constitution of Pakistan was made, certain constitutional amendments have been introduced which have placed limits on religious minorities' rights and religious freedoms

Kaleem Dean The squeezing religious minorities always complain about the maltreatment in the country and keep reminding the nation about the forgotten blueprint of Pakistan sketched by the founder of Pakistan. The incomprehension of the founder’s philosophy of governance was a severance of the modern democratic Pakistan which never was revived by the political elite in the last seven decades. Since Quaid-e-Azam joined the Muslim League in 1913, he advocated Muslim minority rights in the sub-continent, even though he believed Hindu-Muslim unity was possible in a combined India. In the early 20th century, Sir Agha Khan III led a delegation to the then viceroy, the Earl of Minto requesting him for the protection of the socio-political rights of Muslims in the Sub-Continent, and almost after three years under the Morley-Minto reforms, a separate electorate system for Muslims was acknowledged. However, over the years Muslim leaders realized that with their minimal political participation, they would remain as a ‘minority’ in a pre-dominant Hindu India.

In 1920, Mohandas Karamchand Gandhi led a ‘non-cooperation movement’ to resist British rule through non-violent means ‘satyagraha’, the movement was launched in reaction to the oppressive Rowlatt Act and Amritsar Massacre in 1919.  But Muhammad Ali Jinnah, opposing the policies of non-cooperation with British rule, resigned from his Indian National Congress membership, and thereof, Hindu-Muslims socio-political differences got worse. In 1936 under the leadership of Jinnah, contested provincial election in 1937 and with three exceptions-Bengal, Punjab and Sind, the league failed to form the government in any province. In 1939, the Second World War-against the will of native Indians, the British Indian Government declared India at war with Germany. In protest, the ministerial cabinet of the Indian National Congress resigned, and the action was celebrated by the All Indian Muslim League and Quaid-e-Azam’s call to celebrate 22 December 1939 as a ‘Day of Deliverance’ which was actually a vote of confidence in the leadership of Muhammad Ali Jinnah. And in its 27th Annual Session in 1940 at Lahore Manto Park, Muslim League unanimously passed ‘Pakistan resolution’ thus the Indian Muslims movement of separate electorate turned into a separate state movement. In this Annual Session, like-minded Christian and Hindu political leaders too participated and assured their complete cooperation for a separate country for Muslims. Several Christian and Hindu leaders including, Chaudhry Chandu Lal, Dewan Bahadar S.P.Singha, Joshua Fazal Din, F.E. Chaudhry and a Raj Kumari, a Hindu woman member of Muslim league participated in the Annual General Session of Muslim League completely assuring Quaid-e-Azam and other leaders of their full support and political cooperation. Chaudhry Chandu Lal emphasized that religious, social, economic and political rights of the religious minorities in the new state must be ensured, at which, Quaid-e-Azam extended his full support and assurance to non-Muslim of their equal rights.  All Indian Christian Association headed by Dewan Bahadur SP Singha participated in 1942 annual convention of All Indian Muslim League in Lyall Pur, presently, Faisalabad, extending unconditional cooperation to the Quaid-e-Azam with regard to his efforts for an independent country.  At the time of independence in 1947, Christian political leaders opposed the division of present-day ‘Punjab’. On 23rd June 1947, a meeting was presided by SP Singha to decide the fate of the Punjab province. But prior to that, on 21st June 1947, all Christian members of the Punjab provincial legislature in a private meeting decided to support Quaid-e-Azam and that Punjab would be the part of Pakistan, not India.

In democratic countries, numerical participation from different groups of people ensures their political participation in the system. Ironically, religious minorities in Pakistan are represented by their lowest approximation and therefore, claims of increasing their representation simply aren’t true

In August 1947, Pakistan came into being and Quaid-e-Azam became the first Governor General of the newly born state. Acknowledging the hard work and commitment of non-Muslim political figures of Pakistan, Quaid-e-Azam, time and again assured them that their rights would be ‘fully safeguarded’. His 11th of August speech is a blueprint of the state he wanted to carve out but during his lifetime, some cabinet ministers started questioning about the missing Islamic structure of the society. Chaudhry Muhammad Ali quashed Quaid-e-Azam’s speech of 11th August 1947. After the death of Quaid-e-Azam, Liaquat Ali Khan, the first Prime Minister of Pakistan maneuvered founder philosophies of governance claiming Pakistan was a historical manifestation of Muslims legacy who ruled over Indian Subcontinent for eight centuries, thereby, the country would be run according to the teachings of Islam. Within first decade of its inception as an independent country, Pakistan was completely changed to an Islamic State against the credos of the founder of Pakistan. Now after seven decades, there is enormous legislation against religious minorities that has changed Pakistan to an out rightly exclusive Muslim State leaving no social as well as political space for religious minorities. The political parties and their heads are not taking this trepidation seriously, rather an outdated swindling chronical of the conclusive claim that ‘all religious minorities enjoy equal rights in the country’ is preached which itself in contravention of the constitution of Pakistan. Minorities’ population in Pakistan occupies a static percentage whereas with the average growth rate of 2.4% countries’ population has reached to 207 million.  In 1981 religious minorities were counted 3% when the total population was 83.7 million. In 1998 population reached up to 132 million but minorities’ presence was quoted 3%. The latest census of 2017 when the total population has swelled up to 207 million and minorities populations has not be disclosed.

Obviously, in democratic countries, numerical participation from different groups of people ensures their political participation in the system. But ironically, religious minorities in Pakistan are represented by their lowest approximation and as a result, their claim of increasing their representation is rejected. Last year when a bill was presented in the NA for increasing the number of minorities’ seats,  it was rejected by the standing committee with the plea that the bill could be moved after the census. The constitutional rejection of minorities is not intentional but this is the demand of the theocratic system of governments. Though, there are some political forces which believe in catering better socio-political rights for minorities but because of powerful seen and unseen forces, democratic parties have to adopt the same narrative of safeguarding the country and religion from internal and external threats. The Jinnahist ideology of separating religion and the politics is deemed a great threat to the religion, therefore, for the safety and security of the religion, since 1956, the f 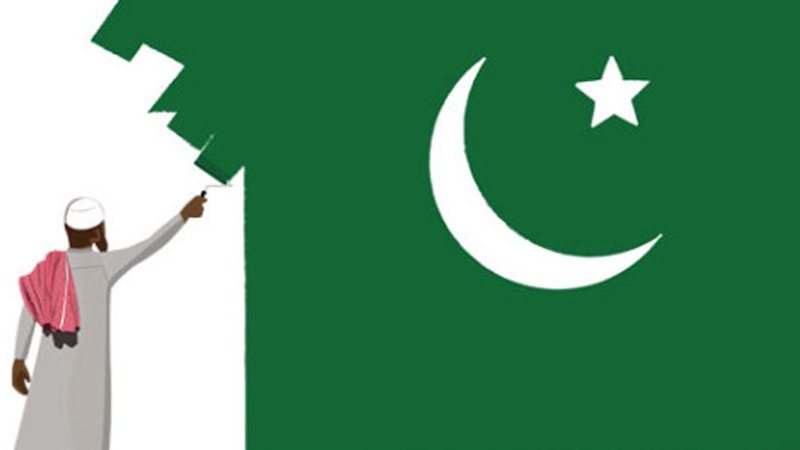 irst ever constitution of Pakistan, certain constitutional amendments have been introduced which have mutilated religious minorities’ rights and religious freedom in the country. Though, minorities have a right to offer their prayers and celebrate their festivals but are they allowed to propagate their faith. Is apostasy is not a crime in Pakistan? Hindu and Christian girls are forced to marry Muslim men but Muslim women will never get this choice. If a Hindu or Christian man wants to marry a Muslim woman, it is mandatory for him to leave his religion. Ahmadis in the country are forced to leave. In the recent International Khatam-e-Nabuwat Conference, it was emphasized that Ahmadis must be forced to embrace Islam or leave the country. Pakistanis have forgot their status in the combined India and that how desperately they were looking for a piece of land where they could exercise their faith with freedom. The present-day nosediving minorities are living with the same status as seventy years before Muslim were living in India. In these circumstances, minorities have no other choice to leave their birthplace-Pakistan.