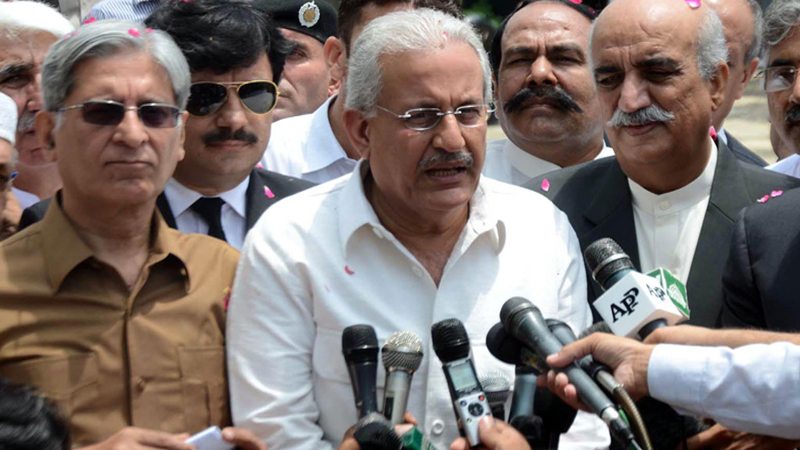 The co-sponsoring of the UN Resolution on the Palestine issue had brought US pressure on Pakistan and the Muslim world should realize that. Further there was a changing world scenario in which a nexus among the US, Israeli and India was emerging and the Ummah needed unity to deal with this because today it was Pakistan and Iran tomorrow it could be any other country.

The Chairman Senate Mian Raza Rabbani was leading a delegation of Senators to participate in the 13th session of Parliamentary Union of Islamic Countries (PUIC) being held in Tehran, Iran. The Chairman Senate was specially invited by the Speaker of Iranian Majli-e-Shora. Mian Raza Rabbani said that Pakistan condemns the decision to derail Middle East Peace Process in an already volatile and strife-stricken region. “This move not only defies the rule of law and international norms, but also reinforces the hegemonic and belligerent “might is right” policies in international politics” Raza Rabbani remarked. He said that a reflection of duplicitous policy approach is already being witnessed in Asia and elsewhere in the shape of forced regime changes through undemocratic means. He cautioned that success of the international campaign against terrorism will be undermined by such regressive moves that only serve to perpetuate and deepen frustration and anger among the affected populations.

He said that Pakistan fully supports Palestinians’ demand for an independent state with Al-Quds as its capital and the Parliament of Pakistan has also consistently and unequivocally supported the just cause of the Palestinian people. Senate and National Assembly, he said, in their respective sittings in August 2014, passed separate resolutions expressing strong support for the Palestinian cause and to condemn Israeli atrocities and genocide in Gaza recently.

Raza Rabbani, however, underscored the need to make both OIC and PUIC more vibrant and proactive in responding to challenges as well as other needs of the Muslim world today. “We must resolve and rise above divisive conflicts be it sectarian, ideological or communal” he observed. He proposed that the way forward lies in enhancement of multi-stratum cooperation in areas such as economy, trade, infrastructure, investment, education, health, science and technology, agriculture, energy and defense to name but a few .

He remarked that twin issues of economy and security pose a grave threat to the peace and harmony of the entire Muslim Ummah and increased security and defense cooperation between the PUIC countries is key to remove the roadblocks to progress and prosperity that terrorism poses. He said that Pakistan has borne the brunt of the War on Terror for over one and a half decade. Thousands of Pakistanis, military personnel as well as civilians have lost their lives and almost as many have been maimed and wounded, he maintained. He said that Pakistan will continue to play a proactive role against this tide of extremism and anarchy.He called for collective efforts to root out the menace of terrorism and must not let a handful of extremists and transnational terrorists malign Islam for their vested interests. He stressed the need to promote the true image and message of Islam as a religion of peace, tolerance and respect for human dignity, rights and freedoms. He said that PUIC can play an important role being a forceful institutional voice of the Muslim world through elected representatives of the people.

Raza Rabbani was of the view that our shared ideals concerning peace, development and democracy can be realized through joining hands in an atmosphere of mutual trust, cooperation and respect. He said that together, we have a better chance to address and neutralize injustices and oppressions being faced by the Muslim world due to dual standards and unequal human rights approach of the western world.