“I wish more Mussalmans would enter into this realm of the film industry, and I shall always be glad to do all I can to help it,” wrote Jinnah in a recently discovered letter found in the collection of Mohammad Masud, an 80-year-old political activist who frequently wrote to leaders. The letter dates back to January 6, 1945.

But yet in its response to local filmmaking companies’ request for protection against better-funded film ports, the Ministry of Industries under Sardar Abdur Rab Nishtar, said: “In principle, Muslims should not get involved in filmmaking. Being the work of lust and lure, it should be left
to infidels.”

This, according to cinematographer Mushtaq Gazdar, goes on to show how the opinion about cinema being something sinful does not originate from Talibanic dogma from the Zia years; it has been the official position of Pakistan from the beginning. This, however, does not mean Zia’s brutal slaughter of culture and art was nothing new; this only highlights the structural roots of Pakistan after independence.

The state’s active role in engineering the identity came at the cost of culture, art and literature. The journey of cinema – that predated partition – was polluted by the schizophrenic state’s distortion of the ‘Indo-Persian’ soul of the identities of the people of the state painfully carved out of India.

The postcolonial state’s attempts at defining ‘Pakistan’ and impossible disavowal of common heritage included the representation of national “culture” as specific and different from that of India’s. The newly migrated artists and critics – whose colonial Indian social, cultural, intellectual, and spiritual formations predated Pakistan – were forced to obey the state’s project in instrumentalising the cinema to “make Pakistan”, the country that was non-existent before 1947.

In his essay on Pakistani film, Saadat Hassan Manto points out that there is not much difference between Muslims and Hindus in quotidian life, adding that it is this mundane sphere of every day, not religious doctrine, which is the stuff of cinema. “Thus, the specificities that Pakistani films might display, a religious–cultural identity distinct from India’s was never likely to make sense in depicting ordinary people.”

This has also been recognized by Hamid Dabashi in his forward for the book Cinema and Society: Film and Social Change in Pakistan. He propounded the idea of ‘national trauma’ – partition, in this case – in the histories of nations as a tool to construct ‘national cinema’.

Though there are many, here are some of the Pakistani movies that became the victim of state’s war on free expression:

Jamal Dehlavi’s ‘The Blood of Hussain’ proved to be a prophetic movie as soon after the completion of its shooting in 1977, General Zia ul Haq seized power in Pakistan: the movie was about a military dictator challenged by a rebellious man called Hussain. No wonder why it was banned by Zia. It remains proscribed to this date.

The film shows how two brothers, Selim and Hussain Murtaza (both played by Salmaan Peerzada) react differently during a military regime in Pakistan. Though the two brothers are identical twins, they are poles apart in terms of their personality. Selim is an ambitious modern and westernised young man. Being a realist and an opportunist, he is all willing to cooperate and work with the military regime for the sake of his own career. Hussain, on the other hand, is rebellious and romantic by nature. He is always reminiscing a prophecy told by a mystic during his childhood that like his famous namesake 1400 years ago, he has a destiny that is yet to be fulfilled. 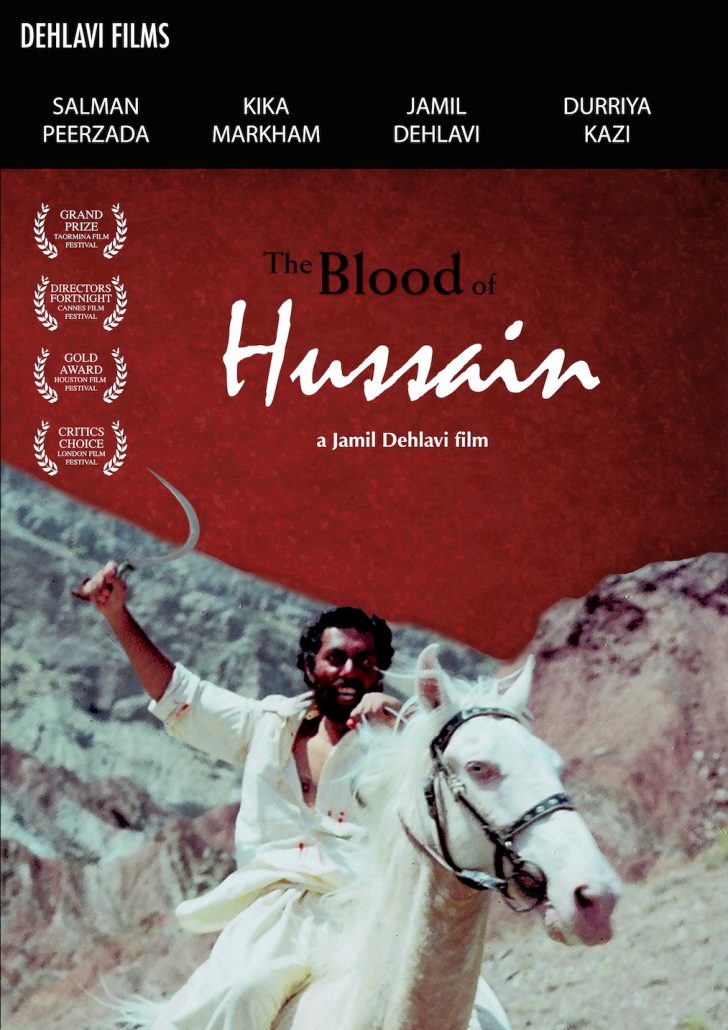 Irked by Hussain’s rebellion and defiant stance, the military establishment decides to wipe him out. In the end, Hussain leads a hopeless rebellion against the army in which his family and loyal supporters are eventually cornered and he himself is ultimately killed.

Critics have noted that one can almost feel a jolt of Satyajit Ray and Ingmar Bergman in terms of the themes that are conveyed in the movie. The movie was executed on “show, don’t tell” doctrine with breathtaking scenes showing frustration, misery and compassion along with symbolic analogy of Karbala.

Jaago Hua Savera is a 1959 Pakistani drama film directed by A. J. Kardar. Written by poet Faiz Ahmed Faiz, it is considered to be the only known neo-realist film produced in Pakistan at that time. It was also Pakistan’s first ever submission to the Foreign Language Oscars. 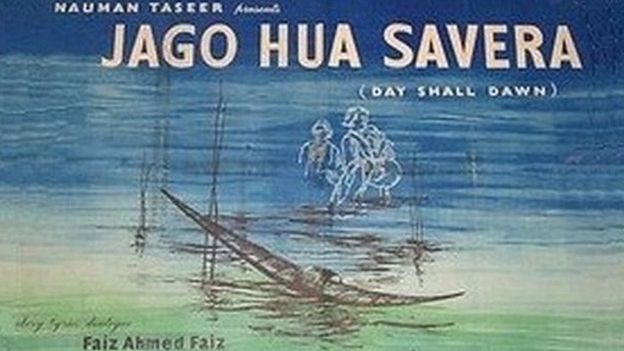 Inspired by the original story of Bengali author Manik Bandopadhyay, the film depicts the daily lives of fishermen in East Pakistan (now Bangladesh) in the village of Saitnol (near Dhaka) and their struggles with loan sharks. The movie was the first one to be executed in East Pakistan – the wing that had no money for the arts and was always subjugated culturally by the rich and powerful west wing of the country.

The emergence of cinema in the eastern wing – that boasted many men of letters – alarmed the military rulers. It was only released in London as the government under Ayub Khan ordered the filmmakers to not release it in Pakistan. Faiz saheb was in jail when the movie got premiered in London.

The movie went on to win a Gold at the 1959 Moscow Film Festival.

It describes the conflicts between Hindus, Muslims and Sikhs. This film is based on real-life events in 1947.

The film is set in a village in Punjab, India where Hindus, Muslims and Sikhs are living peacefully before 1947. 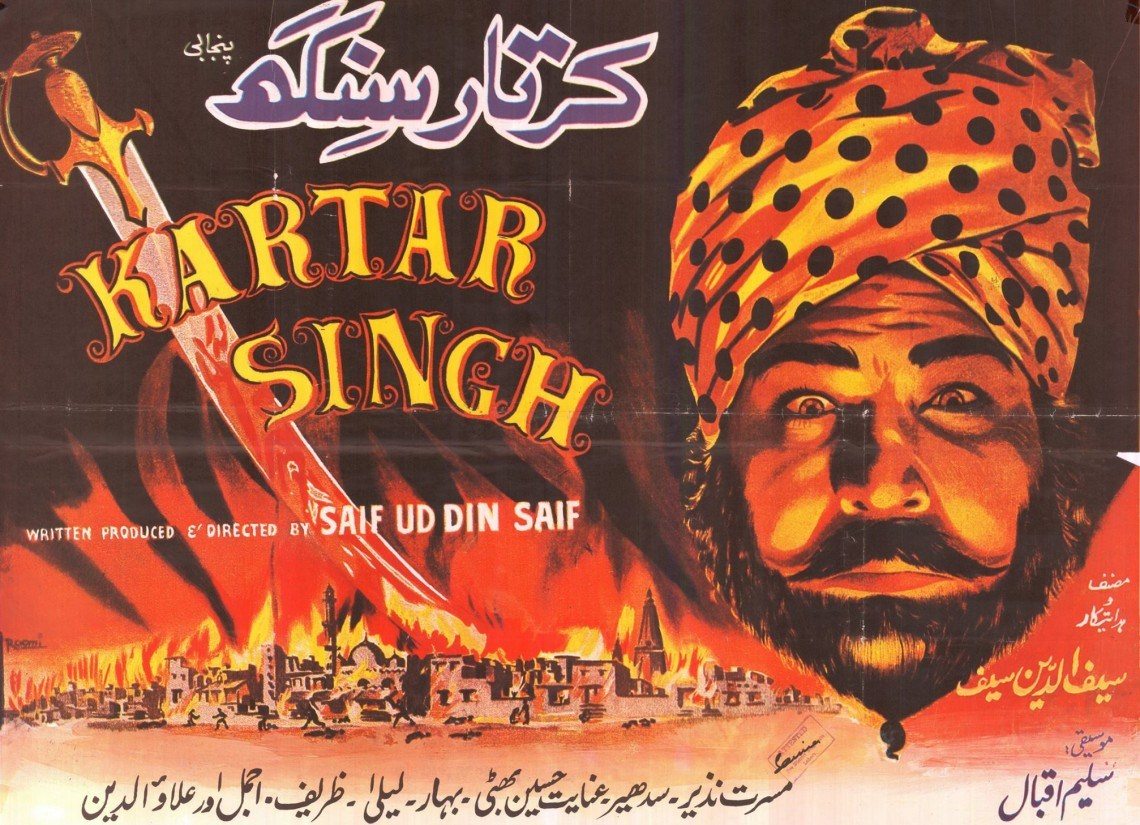 After the partition, the Muslims of the village including the hero Umer Din, a renowned World War II veteran who has fought in Burma, and his love interest Musarrat Nazir wants to migrate to Pakistan. As they try leave in hostility and violence everywhere in the village, Umer Din’s sister gets abducted by the Sikhs but she is protected by an elderly Sikh who gives her shelter and looks after her. When his son tries to rape her, the old man kills him. The old man then sends Umer Din a letter that his sister is safe and unviolated and sends her safely back to Pakistan.

This movie is based on the Urdu short story Pagli by the feminist writer Hajra Masroor.

Aakhri Station is a prime example of East Pakistani filmmaking: literary, socially conscious and proudly Bengali. Set against the backdrop of a large industrial project in rural Bengal the story centres on the romance of Jamil (Haroon), an honest engineer who is framed by corrupt contractors, and Fawzia (Rani) the station master’s daughter. 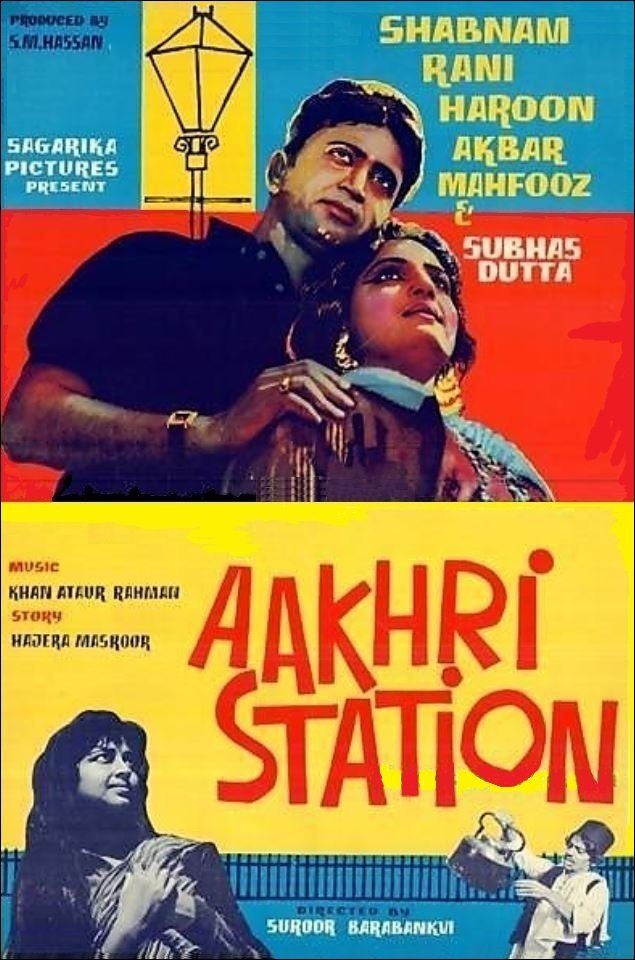 Shabnam plays Jamila, a mad woman who lives on the platform of the station. Shabnam’s character represents and reflects the cruelty and corruption that permeates every society. The movie gives a political message of how powerful Urdu speaking outsiders have raped an innocent beautiful Bengali woman and abandoned her on the margins of society.

AJ Kardar made this film for Pakistan Air Force in 1969. It starred Shabnam, Tariq Aziz, Rozina and Rosy Samad. General Yahya Khan had attended the premiere. 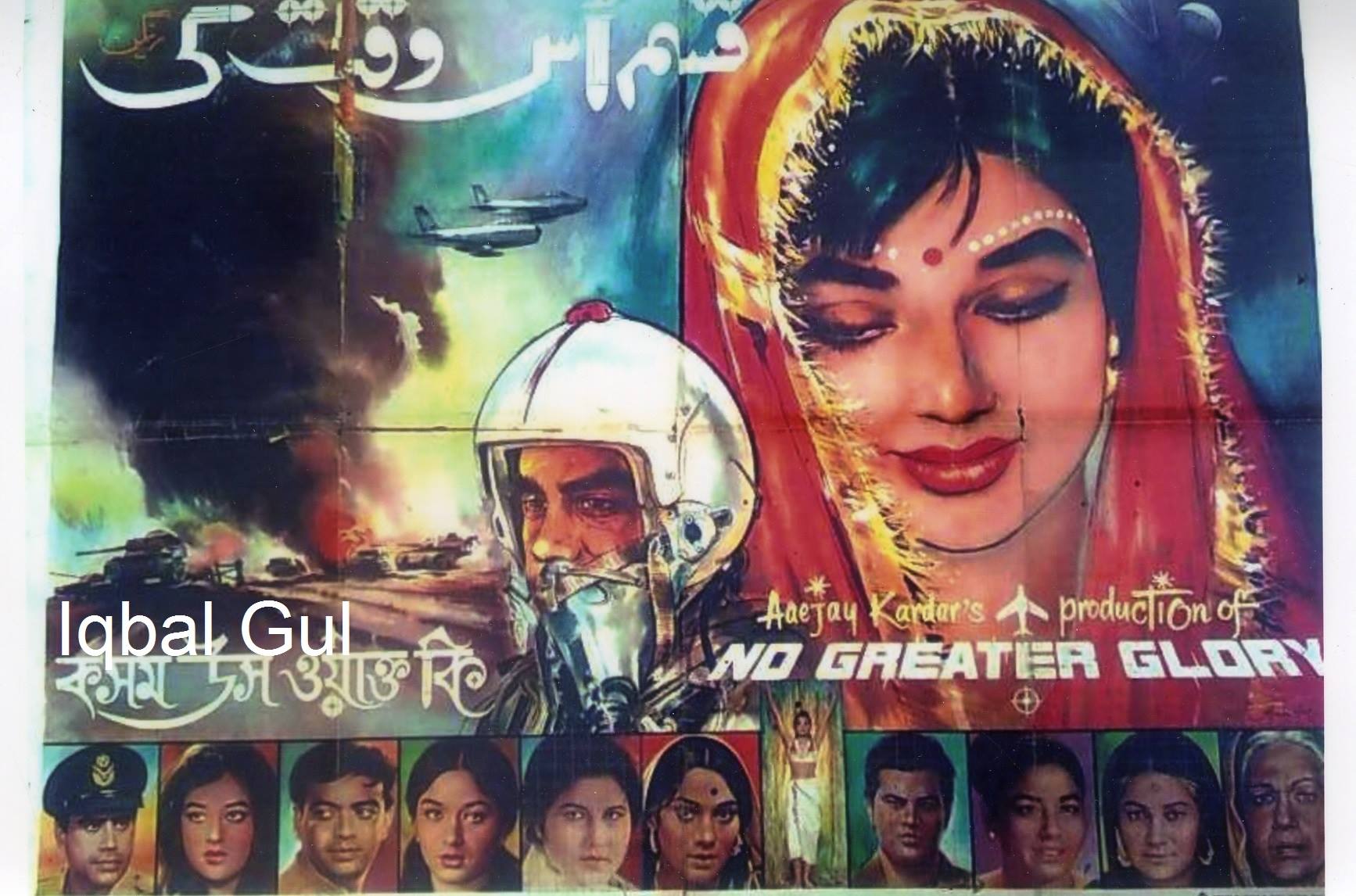 An Eid release, Qasam Us Waqt Ki was all over newspapers and magazines long before it hit theatres. However, within days it was taken down. The failure of Qasam Us Waqt Ki and Jago Hua Savera broke Kardar’s heart. Almost all of his films either went into the dark or never saw the light of the day, including Door Hai Sukh Ka Gaon.

Khamosh Pani is a film about a widowed mother and her young son living in a Punjabi village as it undergoes radical changes during the late 1970s during military dictator Zia-ul-Haque’s era. The film was banned.

The film is about Ayesha (Kirron Kher), a middle-aged widow in Punjab who teaches young children the Quran and who helplessly watches her young carefree son, Saleem (Aamir Malik), become a hardened zealot under the new regime. And the contradictions of Pakistan, its state, history and cultural identities begin to perplex Ayesha who was originally a Sikh woman, Veero, who ran away from her family’s attempt at the time of Partition to have her jump in a well to ‘safeguard’ her chastity and honour rather than be raped and killed  by the Muslim mobs. 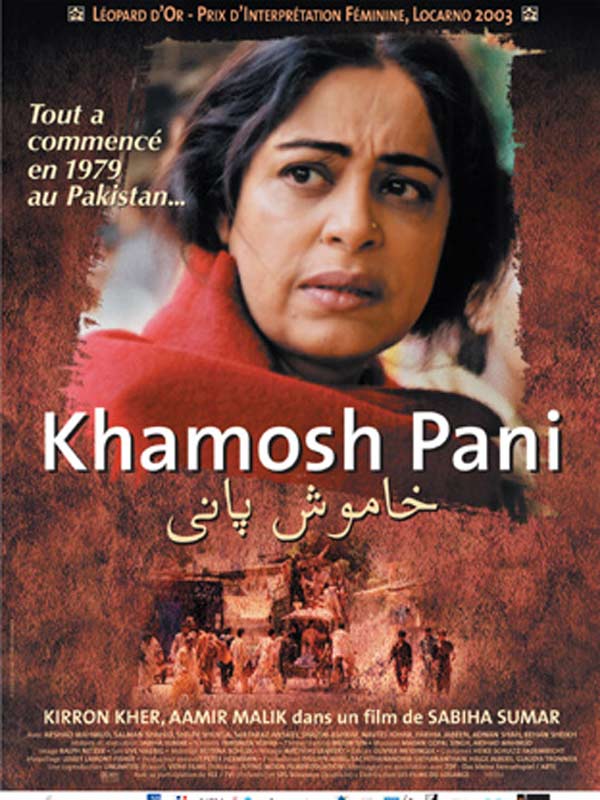 Veero escaped death in the well and was later abused and imprisoned. She ultimately marries her abductor and settles down in Pakistan as a Muslim, Ayesha, but never ever goes to the well to gather water.

As events in Zia’s Pakistan become worse and young minds are being radicalised rapidly, her son, shocked at her history, rejects her, Ayesha realises that she can never escape her past. She finally goes to the well and jumps in, the death she escaped in 1947. The movie shows how the shadow of the events of 1947 still loom and haunt us.

The author is an Assistant Web Editor, Daily Times. He can be reached at [email protected] and tweets at @HamzaRaoxxx.