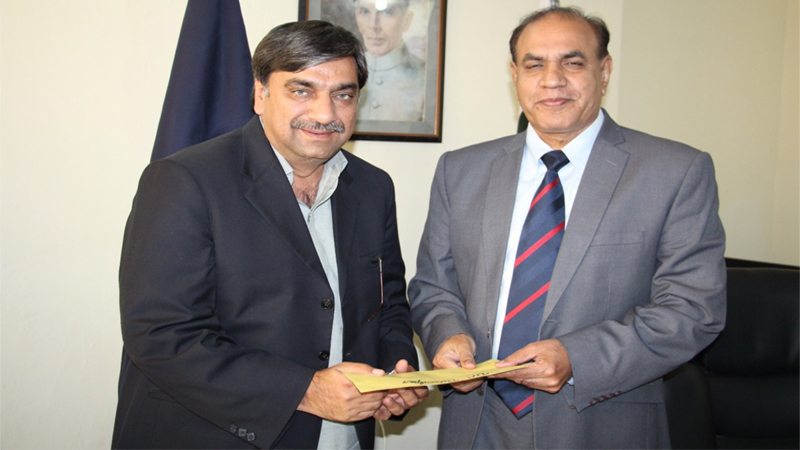 BAHAWALPUR: National Accountability Bureau (NAB) has returned the recovered amount of Rs 14.89 million to the Board of Revenue and the Punjab government in two cases – State versus Malik Zahid Afzal Patwari (Reference No. 46/2016) and inquiry against Maqsood Ali S/o Sardar Ali, Former Sub Registrat Bahawalpur and others.

Director General National Accountability Bureau (NAB) Multan Atiq Ur Rehman returned the recovered amount of Rs.14.89 million to Board of Revenue Punjab and Government of Punjab, during the cheque distribution ceremony held at NAB office.

According the Deputy Director Media Asim Raza, in first case, titled Inquiry against Maqsood Ali S/o Sardar Ali, Muhammad Akram Bhatti, ex-sub-registrar, Bahawalpur and others Rs 11.815 million have been recovered and handed over to Jam Muhammad Tehsildar Bahawalpur for depositing in state exchequer. Accused persons in connivance with officials of revenue department, illegally possessed government land near prince cinema, Ahmed Pur East, Bahawalpur by deliberately hiding the status in various ‘Jamabandis’ over a period of time since 1961. The loss caused to exchequer was calculated to the tune of Rs. 70 Million. During inquiry, it was further established that the land of ‘Prince Cinema’ situated at Mouza Ahmad Pur Kohna, Tehsil Ahmad Pur East Bahawalpur was auctioned on 18.12.1957 in favor of Sardar Ali s/o Ameer Ali being highest Bidder for a meager amount of Rs. 250,000. The accused failed to deposit the amount within stipulated period of time. It was further revealed that accused Maqsood Ali Ex-Sub-Registrar illegally sold 18-Kanals and 16-Marlas of State Land (18K-8.5M Residential and 7.5Marlas Commercial Land) to different beneficiaries in connivance with officials of revenue department. During the course of inquiry an indirect recovery of Rs. 11.815 Million was affected from the occupants of land which has been handed over to Jam Muhammad Aslam, Tehsildar Bahawalpur.

In the second case, pay order of Rs. 3.075 million was handed over to Mr. Sarfaraz Ahmed Additional Commissioner (Coordination) Multan Commissioner Office Multan for depositing in state exchequer. According to details, a complaint was received against Zahid Afzal Patwari, Multan, wherein it was alleged that accused person has amassed assets beyond known sources of income and that he has illegally entered mutations in various Mouza but did not deposit the fees in govt. exchequer. During inquiry/ investigation the allegations levelled against accused for amassing assets beyond known sources of income and making of illegal entries of mutations, were established. It was revealed that the accused purchased/ booked costly plots/ properties in various Housing Societies i.e. Govt. Officials Co-operative House Building Society Ltd, Buch Villas, Cantt Villas, Fatima housing Society, a house in Pearl City in Multan, P&D society and Lake City in Lahore, Bahria enclave and CDA in Islamabad and Bahria Town in Karachi as well as three insurance policies from EFU worth millions of rupees. Entry of illegal mutations in various Mouzas was also established. During inquiry/investigation the accused failed to justify the allegations levelled against him. A reference against accused person, amounting to Rs.11.78 million was filed in the Accountability Court Multan. Accused Malik Zahid Afzal, Patwari entered into Plea Bargain U/s 25 (b) of NAO, 1999 which was accepted and subsequently approved by Accountability Court, Multan. Total embezzled amount was recovered from the accused through Plea Bargain. Earlier, the amount of Rs. 5.758 million were recovered through two Pay Orders No. 229260 amounting to Rs. 2.879 million dated 30-05-2017 and No. 229299 amounting to Rs. 2.879 dated 27-07-17 and were subsequently handed over to Addl. Commissioner (Coordination), Commissioner Office Multan.