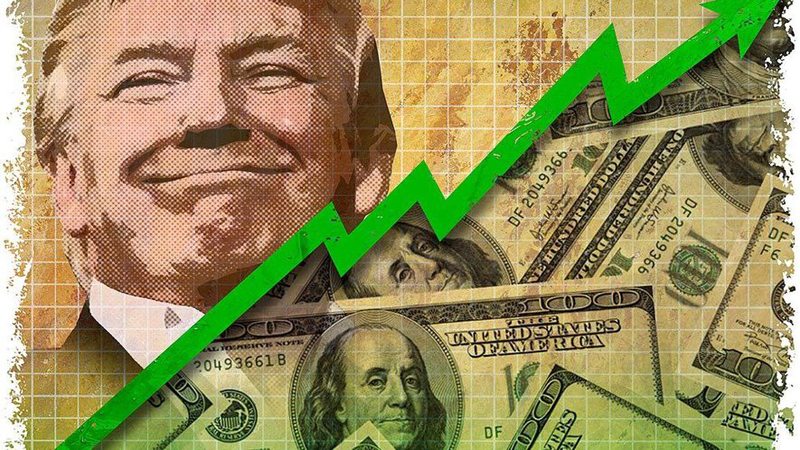 Since the day Donald Trump was elected president in November 2016, the Dow Jones industrial average has risen by some 35 percent, making the last 14 months one of the greatest bull market runs in history. Some $6 trillion of wealth has been created for Americans – which is very good news for the 55 million Americans with 401k plans, the 25 million or so who have IRAs, and another 20 million with company pension plans and employee stock ownership plans.

The left was certain that exactly the opposite would happen with a Trump presidency. To borrow a recent phrase from House Minority Leader Nancy Pelosi, President Trump’s policies would cause “Armageddon” for family finances, the American economy, and the stock market.

Keep all this talk of economic meltdowns and financial market doomsday in mind the next time you hear a new commentator say that “most economists” believe that Mr. Trump’s policies won’t work, or “mainstream economists” believe Mr. Trump doesn’t know what he is doing. When it comes to Mr. Trump’s critics so far have almost all been not just wrong, but dead wrong. Here are some greatest hits that we’ve gleefully compiled from the past 18 months or so.

o “Donald Trump’s first gift to the world will be another financial crisis.” – Headline in the U.K. Independent. “He gives every impression that he will soon be hustling America – and possibly the entire world – in the direction of another catastrophic financial crisis.”

o “I have no stocks. I advise people not to invest in the stock market, not now. Way too dangerous.” – Filmmaker Michael Moore, August 2017.

o “It really does now look like President Donald J. Trump, and markets are plunging. When might we expect them to recover? A first-pass answer is never… So we are very probably looking at a global recession, with no end in sight.” – Paul Krugman of the New York Times the day after the election.

o “If Trump wins we should expect a big markdown in expected future earnings for a wide range of stocks – and a likely crash in the broader market [if Trump becomes president].” -Eric Zitzewitz, former chief economist at the IMF, November 2016.

o “Under Trump, I would expect a protracted recession to begin within 18 months. The damage would be felt far beyond the United States.” – Former Clinton and Obama chief economist Larry Summers, June 2016

o “Trump would likely cause the stock market to crash and plunge the world into recession.” -Simon Johnson, MIT economics professor, in The New York Times, November 2016.

o “I have never seen an election in which the markets have so strong of a view as to what was good and bad about the outcome. And what you saw was the markets rallying yesterday because of the FBI thing on Sunday. And the reason I mention this particularly is if the likely event happens and Trump wins you will see a market crash of historic proportions, I think … The markets are terrified of him.” – Steve Rattner, MSNBC economic guru, October 2016.

o “Wall Street is set up for a major crash if Donald Trump shocks the world on Election Day and wins the White House. New research out on Friday suggests that financial markets strongly prefer a Hillary Clinton presidency and could react with panicked selling should Trump defy the polls and deliver a shocking upset on Nov. 8.” – Ben White, Politico, October 2016.

And finally, and most unambiguously:

o “A President Trump Could Destroy the World Economy” – Title of a Washington Post editorial, October 2016

Just for the record, the world economy is as strong today as it has been in at least a decade, as The Wall Street Journal recently reported. Now the left has to engage in logical contortions to explain how the red hot American economy is really a result of Obama policies – every which one Mr. Trump has systematically been at work dismantling. As we’ve acknowledged many times, the roaring stock market and the surging rate of growth of the economy (which is now estimated at 3.5 percent up from 1.6 percent in Mr. Obama’s last year in office), could turn against Mr. Trump in the months and years to come. It’s quite possible that the market exuberance over Mr. Trump’s deregulation and tax cut policies have run too far ahead. Though we’re predicting 3 to 4 percent growth for 2018 with the Trump tax cut kicking in.

But what is certain at this point so far in Mr. Trump’s presidency is that anyone who sold stock on the basis of predictions by liberal “experts” like Larry Summers or Paul Krugman or Steve Rattner missed out on a 30 percent-plus surge in their financial wealth. At some point the market will take a tumble and these discredited gurus will shout “see.” We would have so much more respect for these pundits if they would just do a mea culpa and admit that they were wrong about Mr. Trump and his policies. courtesy the washington times