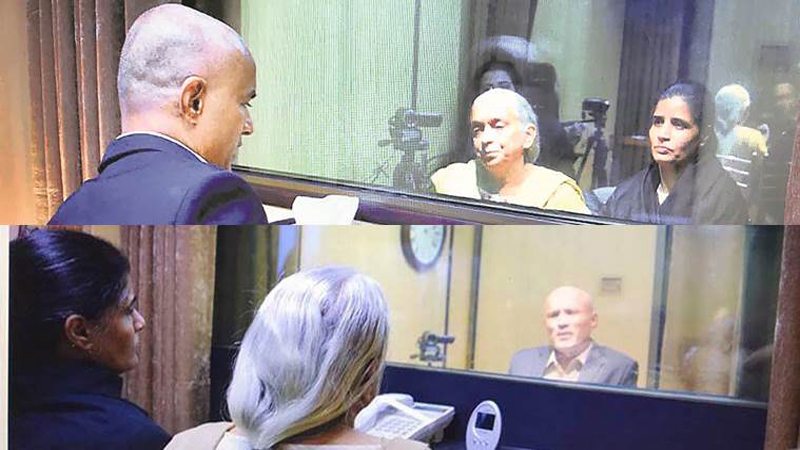 ISLAMABAD: The Foreign Office on Thursday released a new video statement of Indian spy Kulbhushan Jadhav in which he is seen bashing Indian government for ‘poor treatment’ of his family while they were on the visit to meet him in Pakistan.

In the video statement, Jadhav said he saw fears in the eyes of his mother and wife and that the accompanying Indian diplomat was threatening and shouting at his mother.

The RAW agent said he told his mother and wife that he was not physically tortured. His mother expressed satisfaction over his physical health.

In the video, Kulbhushan Jadhav reasserted that he was still an officer of the Indian Navy. “I have to say one thing very important here … for the Indian public, Indian government and the Indian navy … that my commission is not gone. I am a commissioned officer in the Indian navy,” he maintained.

The meeting between Jadhav and his mother and wife was held on December 25 as a humanitarian gesture. Indian embassy officials, including Deputy High Commissioner JP Singh, accompanied Jadhav’s family and were present during the meeting which was conducted in a specially prepared room via an intercom through a glass partition.

Answering queries of media persons at the weekly press briefing, Foreign Office Spokesperson Dr Faisal said Pakistan was always ready to start composite dialogue with India. “It is India who has stopped dialogue process after Pathankot incident. Pakistan has never been reluctant to find a political solution of bilateral disputes,” he said, adding that Pakistan was very clear and not confused like India which had put travel restraints even on sportsmen and general public visiting for religious purposes.

The spokesperson said Jammu Kashmir Liberation Front Chairman Yasin Malik`s letter to the Indian external affairs minister bears testimony of the Indian gimmickry and the situation of human rights in their jails.

To another question regarding India’s arms build-up, the spokesperson said Pakistan always maintained that anti-ballistic missile systems entail instability in the region and provoke an armed race. He said Pakistan was desirous of peaceful neighbourhood in which countries utilize their resources for the betterment of the common man instead of squandering them in futile arms race. He said Pakistan was fully committed to and has proposed to India some restraint measures to promote strategic stability.

The spokesperson condemned US President Donald Trump’s recent anti-Pakistan statement. “Pakistan’s services rendered in war against terrorism have been acknowledged by the world and the same message has been given to US, its ambassador who was summoned after Trump’s tweet,” he said.

Commenting over cut in US aid, the spokesperson said that Pakistan cannot draft its foreign policy keeping in view the economic aspects. He said Pakistan would soon issue complete record of the US aid and its spending.

Responding to a query about possible drone attack by US, Dr Faisal said that ISPR had already clarified that any drone attack would be responded aggressively.

Replying to a question, he said rumors about providing a military base to China in Gwadar are absolutely baseless. “This is just a propaganda to harm the smooth running of CPEC projects,” he said.

He said the trade between Afghanistan and Pakistan had witnessed phenomenal increase last year, with Pakistan’s exports increasing by nine percent.