Man is mortal; however, it is his character on world’s stage that makes him immortal. Socrates and Zulfikar Ali Bhutto are the immortal characters of world history who share common ground in a way. Socrates had to drink the goblet of poison and Zulfikar Ali Bhutto was hanged for the same reason and the ‘crime’ but on different turn of history and place. However, the latter’s crime list is long and myriad. It ranges from giving voice to the poor to nuclearise the defence of the country.

It was he who brought back the 90000 Pakistani prisoners of war from India and gave nothing in return. Wasn’t it a crime to be punished? The formation of 1973 constitution was the crime for which he should not be absolved of. He nationalised the blood-sucking industries and gave a severe blow to status quo in this way. Yes status quo which is discussed every other day in our country. Holding Islamic Conference and levelling ground for the unity of Ummah were the acts for which he must be punished and the ruling powers of the world made him example for which they had promised. But we know an axe cannot cut the wood until a piece of wood itself helps for the same.

By giving his life, Zulfikar Ali Bhutto set a new example of sacrifice when needed for the nation and his family including Shaheed Murtaza Bhutto, Shaheed Shahnawaz Bhutto and Shaheed Benazir Bhutto followed suit. As a matter of fact, Zulfikar Ali Bhutto was just 17-years-old- when he wrote a letter to Quaid-e-Azam Muhammad Ali Jinnah in April in which he clearly mentioned that he would sacrifice his life for Pakistan and the history witnesses he came up to his words.

He wrote: “You, Sir, have brought us on one platform, under one flag, and the cry of every Muslim should be onward to Pakistan. Our destiny is Pakistan. Our aim is Pakistan. Nobody can stop us. We are a nation by ourselves and India is a subcontinent. You have inspired us and we are proud of you. Being still in school, I am unable to help the establishment of our sacred land. But the time will come when I will even sacrifice my life for Pakistan.” Quaid-e-Azam replied him with pleasure from his Mount Pleasant Road residence at Malabar Hills of Bombay on 1st of May 1945 and advised him to have thorough study of politics.

Every aspect of Zulfikar Ali Bhutto’s life is distinctive and desirable. For example he was born on 5th January 1928 the year when for the first time Quaid-e-Azam Muhammad Ali Jinnah visited Bhutto’s ancestral home called ‘Al-Murtaza’ at Larkana, on invitation of Sir Shahnawaz Bhutto. It would be instructive to survey that Sir Shahnawaz Bhutto was in close contact with the father of the nation and presided over Sindh Mohammedans Association at that time. His family shifted to Bombay (now called Mumbai) when Zulfikar Ali was just six years old. The Bhuttos resided in their splendid home ‘The Nest’ in the posh locality of Bombay. Young Bhutto got his early education from Cathedral High School, Bombay and John Connon School, Bombay like Quaid-e-Azam Muhammad Ali Jinnah. He grew in a heated political atmosphere of Bombay where the Muslims being minority were struggling for their recognition as a separate entity. In Bombay, he took keen interest in student politics and offered an active role in Direct Action Day observed by Muslim League on 16 August 1946.

Zulfikar Ali Bhutto got admission in the University of Southern California in the United States after passing his Senior Cambridge. He stayed two years there. During his passion for reading books coupled with strong communication skills signified his bright career in politics. He held a niche in social and university life as an outstanding speaker. In June 1949, Zulfikar Ali joined Berkeley University for his further studies where he won the first election of his life with margin despite the fact he was the only non-American candidate out of seven contested for the seat of Representative-at-Large on the Students’ Council. So was the man and such was the popularity he earned in foreign lands. In 1950, he left for England where he was to study jurisprudence and law at Oxford’s Christ Church College. He completed his degree summa cum laude in two years instead of three years. This brilliant success caused to win the heart of an Oxford professor who became his aficionado and a lifelong friend. 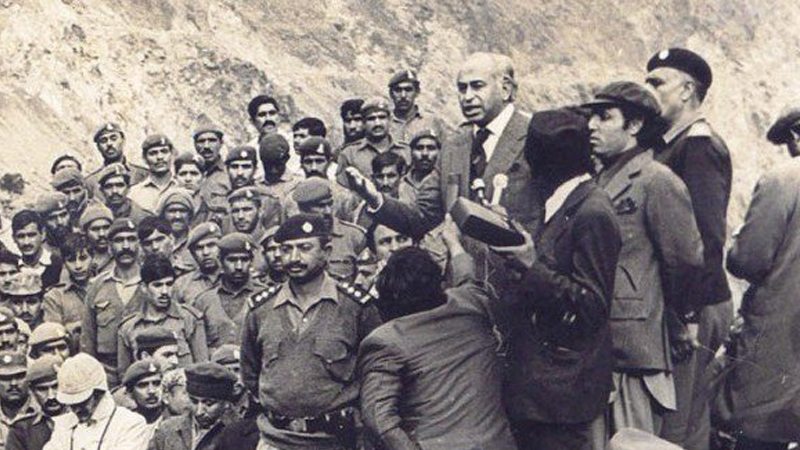 In 1953, Zulfikar Ali Bhutto as a barrister returned to Pakistan and joined Karachi Bar and started delivering lectures at a law college. He also conceived articles in the leading newspapers suggesting a framework for the future Constitution. He was still less than thirty when, in 1957, he was awarded honour to represent Pakistan at the United Nations General Assembly. Next year, he was entrusted the portfolio of Commerce Ministry in federal government. He did not look back when he was awarded portfolio of foreign ministry.

As a foreign minister, Zulfikar Ali Bhutto brought the moderation in foreign policy without delay and balanced the country’s relations with the then two superpowers. The nation is still grateful to the then foreign minister Zulfikar Ali Bhutto for his support for China’s admission in the United Nations and the Peoples Republic of China always recognised Pakistan’s role for the same and stood side by side with Pakistan through thick and thin.

At that time, almost all the prominent world leaders were convinced of his wisdom. While making official tour to USA as foreign minister, he impressed President Kennedy so much so that the latter, after the meeting, shook Mr. Bhutto’s hand and remarked, ‘If you were an American you would be in my Cabinet’. Bhutto quickly retorted: ‘Be careful, Mr President, if I were American, I would be in your place’. This resulted in great laughter by both the gentlemen.

The genius like Shaheed Bhutto could not find himself fit in the narrow minded despot’s cabinet for a long time and developed serious differences with the government over post war handling and resigned from the cabinet consequently. Averse to the dictatorial regime, the people of Pakistan saw Mr. Bhutto as the only hope to save Pakistan.

This led Mr Bhutto to found Pakistan Peoples Party in December 1967. After the dismemberment of Pakistan in 1971 due to the General Yahya’s lust for power, first he held office of President and then Prime Minister of Pakistan. During his short tenure, he worked wonders by introducing the reforms in every sphere of life despite rigidity of opposition and conspiracies both from inside and outside. A snake in the grass bit the democracy and imposed martial law in the country but could not weaken the Pakistanis’ love for Bhutto. At this he found it essential to murder the history by hanging Zulfikar Ali Bhutto after managing fake and biased trial. This act is called judicial murder in history. The despot wanted to kill him but immortalised instead.

Had Zulfikar Ali Bhutto been foreign minister of Pakistan today, he would have made tours to different countries and make them understand the Pakistani narrative as per need of the hour. It goes without saying that the much-needed national narrative would have been prepared by himself alone. Can the present leaders even think of doing so?

The writer is a Lahore based politician, writer, barrister, political analyst and social worker