The data available through Evaccs allows the performance of each district in Punjab to be tabulated, along with providing a tool for monitoring vaccinator performance

With a population of over 110 Million people, the province of Punjab in Pakistan would be the 12th most populous country in the world, had it been a sovereign state. With such a huge population, and an addition of approximately four million new children per year, healthcare is a major challenge in the province.

The province until recently had been faring pretty badly in basic health indicators covered in the MDG’s and SDG’s that include maternal and child mortality rates. It also has a relatively low vaccination coverage compared to other South Asian countries. However, there has been an improvement in vaccination coverage and safe birth deliveries in the province, largely due to the incorporation of technology in the system that has made monitoring and evaluation much easier.

Before taking a look at individual interventions, it is perhaps important to understand the primary healthcare system of Pakistan. The basic structure of primary healthcare in Pakistan consists of different types of health facilities that include Basic Health Unit and Rural Health Centers, whereas the secondary facilities include Tehsil Headquarters and District Headquarters.

A basic health unit is supposed to be the most primary facility, which caters to the population for all non-life-threatening conditions. One basic health unit caters for around 15,000-20,000 people and consists of 1 medical officer and 1 women medical officer along with a couple of members of support staff. It has facilities available for child birth, and has initial medical examination instruments for taking vitals such as thermometers and sphygmomanometers. In cases where the condition of the patient requires specialized healthcare provision, they are referred to specialized facilities such as DHQs and THQs. There are approximately 2400 functional BHU’s in the province.

A rural health center provides more specialized treatment than a BHU and specifically targets the rural areas of the province. There are a total of 300 RHCs in Punjab, with each RHC catering to a population of about 100,000 people. It has at least two male doctors, a female medical officer, along with a dental surgeon and support paramedic staff. It also has an x-ray facility, and minor surgery facilities along with a 24/7 operational emergency. Tehsil Headquarter and District Headquarter hospitals on the other hand cater to a much larger population, and have specialist doctors, MRI and CT scan facilities along with a larger bed size capacity.

Vaccination coverage in Punjab, Pakistan was 54 percent until 2012, compared to 83 percent in Indian Punjab, 93 percent in Bangladesh, and 98 percent in Sri Lanka. A major reason for these low numbers was the fact that vaccinators were not properly managed, and were utilized for other campaigns that were different from routine immunization.

The fact that the country was focusing a lot on polio eradication led to vaccinators overlooking their normal routines in their designated areas. A good measure of measuring complete immunization is the administration of the vaccine Pentavalent-III, that is due 14 weeks after child birth. According to data available from Nielsen, the coverage of immunization in Punjab increased from 54 percent in 2012 to 70 percent in 2015, and showed a phenomenal improvement of 84 percent in 2016.

A number of reforms were introduced in this regard that included providing all the 3,775 vaccinators in the province with Android Phones that included an inbuilt application called eVaccs. This application is used by the vaccinators whenever they administer vaccines, and includes information such as child name, identity documentation of the parents, contact numbers, and the type of vaccine administered.

In the end, the vaccinator is required to take a picture of the child to ensure validity. Furthermore, all the districts of the province have been converted into a number of equal population polygons using satellite information, and polygons that have not yet been covered by vaccinators according to the location transmitted by the android phones are colored pink for all stakeholders to see. There are third party audits done to ensure that the vaccines were administered to the relevant people, and no fake entries were reported in the system. 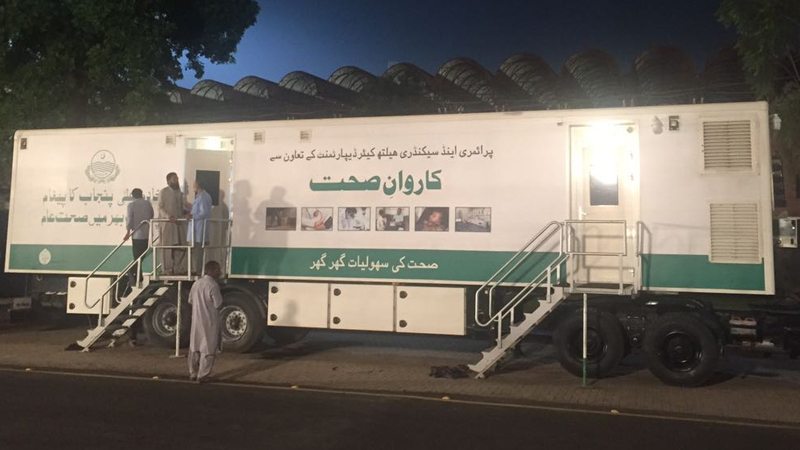 There are monthly meetings presided by the health secretary of the province in the presence of major stakeholders of the health department from individual districts. These meetings are an effective tool to push those districts that are lagging behind in performance, and laud the efforts of those that have shown considerable improvements. The live data available through Evaccs allows the performance of each district in Punjab to be tabulated, along with providing a tool for monitoring vaccinator performance.

In areas where vaccination coverage is particularly low like DG Khan and Rajanpur, there has been an increase in vaccinator recruitments in order to boost the performance. Apart from monthly meetings, there is a quarterly stock take that takes place in the presence of the Chief Minister of Punjab, where critical issues and provincial performance is discussed. Most importantly, the live transmission of data empowers the individual districts to intervene at the ground level and allows officials such as the district supervisor of vaccination (DSV) and DDHO’s to push harder in areas that are underperforming.

Apart from vaccinations, there has been a significant improvement in the number of safe deliveries across the province that too can be attributed to effective interventions. In order to understand the low safe delivery rate in Pakistan, it is very important to understand the dynamics that prevailed in the country since a couple of years back.

All of the Basic Health Units in the country were operational only from 8AM till 2PM, that resulted in very low deliveries at the facility. In 2013, the government started to upgrade it’s normal BHU’s to 24/7 BHU’s that ensured the presence of staff in the facility round the clock. Till now about 1/3rd of the normal BHU’s have been converted into 24/7 BHU’s which are facilitating a large number of safe deliveries in the province. For instance, the number of deliveries at 24/7 BHU’s for the month of November this year was 38,694.

In addition to 24/7 BHU’s, a rural ambulance service was launched this year for expectant mothers in underprivileged areas of Punjab, to take them from their homes to the Basic Health Units and Rural Health Centres for safe deliveries. A dedicated helpline ‘1034’ has been formulated for this purpose. Till now, a total of 803 ambulances have been procured which are regularly monitored. The data of tasks done by these ambulances are then later verified third party evaluators.

Another innovative aspect in this regard is the induction of 1,000 LHV friendly ultrasound machines for BHU’s and RHC’s, that would allow better provision of antenatal care to expecting mothers. The ultrasound machines have also been successful in bringing the expectant mothers to the primary health facilities, as both the expectant mother and her family are attracted by the prospect of looking at the unborn baby on the screens of the machines. This at the same time allows the medical staff at the facility to flag any abnormalities that might be detected in the unborn baby, and refer the patient to a secondary facility.

All these interventions have helped to increase the percentage of safe birth deliveries from 59 percent in 2011 to 80 percent in 2016 for the province of Punjab.

Although the Punjab government is often blamed for being ineffective by the opposition and for not spending in areas such as health and education, credit should be given where it is due. The turnaround in the provision of primary health care, especially in the case of vaccinations and safe birth attendance through incorporation of technology and effective interventions has been phenomenal, and something that the other provinces should also seek to emulate. There is still a long way to go to ensure that health provision in Pakistan is at the acceptable levels as set out by the WHO and the UN, and for meeting the targets of health elaborated in the Goal-III of the Sustainable Development Goals. A lot more has to be done to bring down the child and maternal mortality rates from preventable causes to levels that are envisioned by the world community. However, the fact that some provinces have taken initiatives to address these problems and are moving in the right direction, is a commendable achievement.

The writer is a LUMS Graduate currently working as a consultant with the Primary and Secondary Healthcare Department, Government of Punjab