A Christmas in a remarkedly different mood 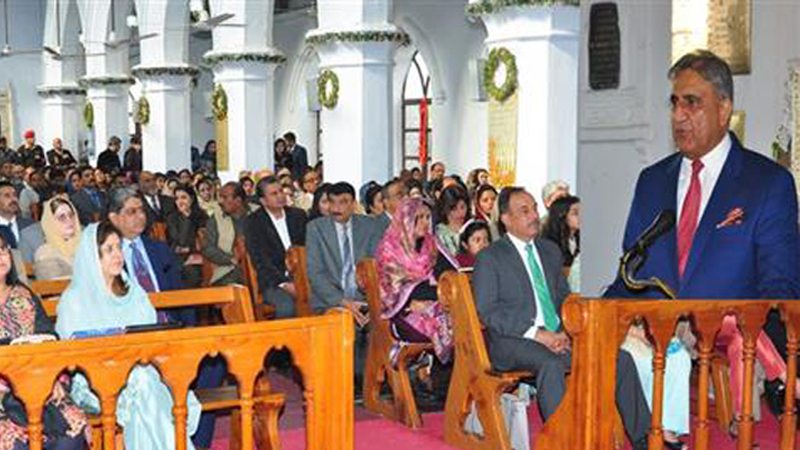 Lahore: On December 25, Chief of the Army Staff General Qamar Javed Bajwa took part in Christmas celebrations and attended the service at the Christ Church in Rawalpindi. General Bajwa wished a merry Christmas to the Christian community of the country. He also ‘acknowledged the role of Christian brethren not only towards creation of Pakistan but also towards its progress’.

As far as I can recall, the only other Muslim dignitary of comparable stature who visited the church on Christmas was Quaid-e-Azam Muhammad Ali Jinnah. Hector Bolitho in his book Jinnah: Creator of Pakistan notes, “August 17, 1947, was a Sunday, and the Anglican Archdeacon had arranged for a special service of prayer and thanks-giving, in Holy Trinity Church, the Anglican Cathedral, in Karachi. The Archdeacon had also composed a special prayer, in which the Quaid was mentioned. When Jinnah heard of this, he asked that he might be allowed to attend the service’.

Over the past 70 years, political space has shrunk in the country for religious minorities. Recent fiery speeches by barelvi cleric, Khadim Hussain Rizvi, also created a sense of insecurity, and then a suicide bombing in the Bethel Memorial Methodist Church in Quetta only days before Christmas further heightened the environment of fear for the community.

Christmas greetings have been a popular topic of discussion on social media platforms. A young Christian woman posted a status on her Facebook wall, saying, “Happy Christmas just to my Christians fellows … I cannot wish Muslim fellows. It will offend them.”

Twitter and Facebook remain abuzz with messages, telling people that it is unlawful for Muslims to greet Christians.

However, many political party leaders have greeted the Christian community on the occasion this year.

Pakistan People’s Party chairman Bilawal Bhutto Zardari cut Christmas cake in Karachi, and tweeted, “Pleasure spending another Christmas with the Christian community in Karachi. Inshallah we will have an egalitarian, progressive and peaceful #Pakistan.”

Punjab’s Chief Minister Shahbaz Sharif also tweeted on the occasion, saying, “Heartiest congratulations to the Christian community around the world on the festive occasion of Christmas! My gratitude to the Pakistani Christian community for their amazing public service.”

The Pakistani Christian community here and abroad has felt a different mood on this Christmas. Mohsin Rafiq, a Christian engaged for minority rights, told Daily Times, “This time I felt a good change in our society about Christmas. I hope people are ready to respect each other.”

The Pakistan International Airlines (PIA) also celebrated Christmas on one of its plane. A crew member even dressed up as Santa Claus and distributed sweets and toys among children. The airlines’ Facebook wall notes, “In the spirit of sharing the happiness and joy of all those celebrating, our Senior Flight Purser, Peter Inayat dressed up as Santa and with the help of the cabin crew gave out gifts and goodies. And we got the best present of all, a bunch of happy passengers all in the spirit of Christmas.”

Pakistani Christians have always taken pride in the fact that they stood side by side with Muslims at the time of independence. There are unconfirmed reports that the British offered them a small piece of land but they refused and wanted to live with Muslims in Pakistan, expecting that being the People of the Book they were better protected than owning and running a tiny state of their own. The Punjab Assembly Speaker SP Singha, who came from an educated Christian family, affirmed this sentiment in several of his speeches with these words: “We (Christians) are here (in Pakistan) because of the justice system of Islam.”

In its editorial, titled ‘An Unmerry Christmas’ published on Christmas Day, this newspaper had suggested that symbolic gestures of goodwill to minorities alone were not enough. “A good place to start would be employing minorities across the board in a positive discrimination drive. And while doing so, we should pay them on par with their Muslim counterparts. In addition, we must not view those who enjoy different religious holidays as a burden on the economy. Instead, we should be quietly and steadily campaigning to have any negative constitutional provisions done away with.”

We can hope that the tradition of respecting the contribution of religious minorities and treating them with respect will continue in future, and not just in statements issued on their festivals but in everyday life by sharing prosperity and resources of our motherland.