Only a 21-gun salute, no official ceremonies, on Quaid’s birthday 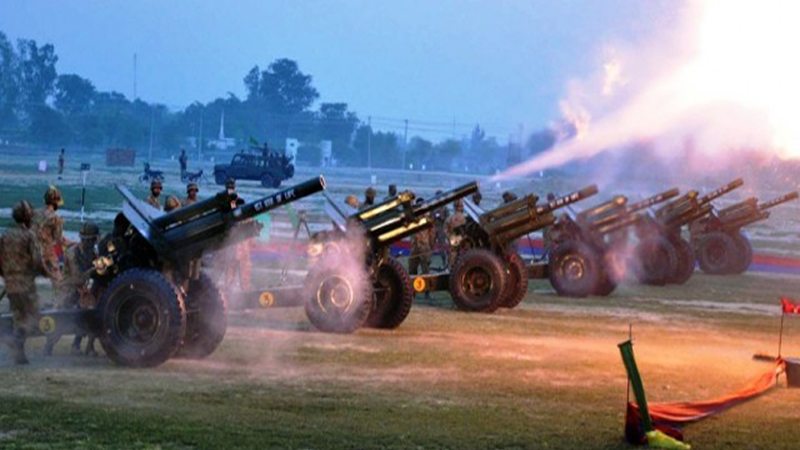 LAHORE: The birth anniversary of Quaid-e-Azam Muhammad Ali Jinnah observed here on Monday as the citizens paid tribute to the father of the nation.

The day marked different activities including conferences, cake cutting ceremonies and other activities which paid homage to Jinnah whose efforts resulted in the creation of Pakistan.

Like every year, the day began with a 21-gun salute, whereas state owned and private TV channels aired special programmes featuring the efforts of Mr Jinnah in the cause of Indian Muslims. However, no official ceremony was organised at the government level to commemorate the birth anniversary of the founder of the nation.

Political parties and civil society organisations, however, held ceremonies where cakes were cut to mark the day.

The Pakistan Tehreek-e-Insaf (PTI) held a cake cutting ceremony which was attended by PTI Central Punjab President Abdul Aleem Khan. Addressing on the occasion, Aleem Khan said that Quaid not only worked hard for Pakistan but he also gave a vision for a corruption-free society. He focused on working hard rather than going for short cuts, Khan added. Aleem Khan said that today ‘we need to follow in the Quaid’s footsteps’.

A ceremony was also held at Services Hospital, organised by the nursing staff. Chief Nursing Superintendent Samina Yasmeen addressed on the occasion. She saluted the nursing community for rendering unmatched services to the humanity. She said that in the last days of the Quaid-e-Azam when his health had deteriorated, it was a nurse who helped Quaid’s sister Fatima Jinnah look-after him and provide him with necessary medical care. “On Quaid-e-Azam Day, all nurses should uphold the teachings of the great leader and continue to work for the ailing humanity with same zeal and zest,” she said.

Imamia Students Organisation also organised a ceremony at the ISO head office. ISO office bearers speaking on occasion emphasised that the teachings of the Quaid like his famous saying ‘unity, faith and discipline’ and ‘work, work and work’ were there for all to follow. They said, “the struggle of Quaid-e-Azam became fruitful and a separate state was established for the Muslims of India”.

Born on December 25, 1876, Muhammad Ali Jinnah’s professional life was characterised by a singular purpose: to struggle for the right to self determination of Indians from different religious backgrounds. In the later period of his life, he became a staunch proponent of constitutional safeguards for the Indian Muslim minority in a post-British political setup. It is his meticulous leadership that transformed the All India Muslim League into a platform where Muslims leaders from various different regions of India could come together and seek such constitutional safeguards. Eventually, Mr Jinnah settled for the establishment of a separate state for Indian Muslims. On August 11, 1948, he gave the foundational vision for the new state in his famous speech.