Shahrukh Jatoi, others out on bail 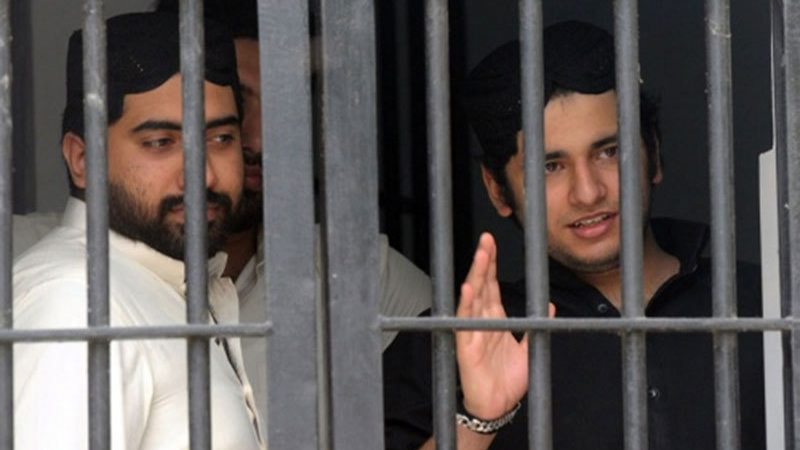 KARACHI: Shahrukh Jatoi and two co-accused earlier convicted in the 2012 murder of 20-year-old Shahzeb Khan were released from jails after their bail applications were approved by a court on Saturday.

Jatoi had covered his face with the hood of his fleece when he walked out of Jinnah Postgraduate Medical Centre (JPMC) in Karachi, where he was undergoing treatment. The hospital had been declared a sub-jail.

The accused were allowed to post bail by District and Sessions Judge Imdad Hussain Khoso, who is overseeing a retrial of the case.

The bail, which was set at Rs 500,000 for each of the accused, was promptly deposited by a lawyer on behalf of Jatoi, Sajjad Ali Talpur and Siraj Ali Talpur. The counsel also moved the court for the immediate signing of their release orders, which were issued forthwith.

Shahzeb Khan’s father, Aurangzeb Khan, had earlier in the day asked the sessions court to not only release the four men earlier convicted of his son’s murder on bail, but also drop the case against them completely.

He argued that his family had earlier pardoned his son’s killers and asked that their decision be upheld.

Pakistani law has a maximum punishment of the death penalty, or life in prison for a murder. But, under Islamic laws of Qisas and Diyat, the victim’s families can strike an out-of-court deal with the murderers. In that case, the victim’s families generally appear in court to testify that they have pardoned the murderer in the name of God. However, Shahzeb’s family had waived their right to Qisas and Diyat and told the court they had reached an out-of-court compromise with the accused’s family.

A couple of months after the sentence was passed, however, Shahzeb’s parents had issued a formal pardon for the convicts, approved by the Sindh High Court (SHC).

Despite the pardon, however, the death penalty had been upheld because of the addition of terrorism charges to the case.

However, the SHC recently set aside the death penalty and ordered a retrial of the case in a sessions court after a criminal review petition filed by Jatoi’s lawyer argued that terrorism charges should be dropped as the prime suspect was a juvenile at the time of the offence.

The retrial ordered by the high court had commenced last month.

In a previous hearing of the case, the sessions court had ordered Shahzeb’s family to submit the pardon documents verified by the high court.

The sessions court had also sought a verified copy of the high court’s order to revoke the punishments against the accused.

As per the court’s orders, Aurangzeb had appeared on Saturday to submit a copy of the pardon. The report on the SHC order to revoke the ATC’s sentence was not presented at today’s hearing.

Aurangzeb claimed that after Jatoi and his accomplices were awarded a death sentence by an ATC, he, with consent from his family, had reconciled with the convicts.

“We forgave Shahzeb’s murderers for the sake of Allah,” he stated.

Shahzeb’s murder in 2012 had prompted then chief justice Iftikhar Mohammad Chaudhry to take suo motu notice of the case, which had sparked outrage across the country as people questioned if the prime suspect — who belongs to the powerful Jatoi family — would ever be held accountable for their actions.

In August 2016, however, Jatoi’s lawyer — Advocate Farooq H. Naek — filed a criminal review application in the SHC, claiming that the offender was a juvenile when the crime was committed and, therefore, the terrorism charges he was tried under should not have been applied.

After hearing Naek’s appeal, the SHC had set aside the ATC’s death penalty and ruled that a section of the Anti-Terrorism Act (ATA), 1997 had been misapplied by police as the case seemed to concern a personal vendetta.

The high court subsequently ordered a retrial and referred the case to a session court.

The episode had started with the harassment of the victim’s sister by Lashari. She stated in trial court that Lashari had directed indecent remarks at her as she was about to enter her 11th-floor apartment upon her return from a wedding.

The victim returned and had an altercation with Lashari, which led to a quarrel between him and the accused persons. However, the victim’s mother later tried to pacify the situation and directed her son to tender an apology.

The victim did what his mother asked him to do, but the accused persons did not accept the gesture, saying that they would be satisfied only if Lashari, who had been employed as a cook by the Talpurs only two days prior to the incident, was allowed to slap the victim.

On hearing those terms, the victim’s mother directed her son to leave the place. Immediately after Shahzeb’s departure, Shahrukh Jatoi had taken out his pistol and threatened that he would kill Shahzeb.

After the four co-accused in the case had also departed, the victims’ parents went to the apartment of the two accused Talpurs’ father, Nawab Imdad Ali Taplur, to settle the matter.

However, the accused persons meanwhile intercepted the victim at Karachi’s Khayaban-i-Bahria and shot him dead.

Two friends of the victim, Muhammad Shah and Muhammad Ahmed Zuberi, who had chased the accused persons fearing an assault on their friend, witnessed the incident and deposed in court accordingly.

The two friends stated in court that Shahzeb rolled over and rested on a side after he was fired upon. Nawab Sajjad Ali Talpur and Ghulam Murtaza Lashari then walked up to the victim’s car and asked Shahrukh Jatoi to kill the victim as he was still alive.

Jatoi had then fired more shots at the victim, ensuring his demise.

Initially, the case (FIR 591/12) had been registered under Sections 302 (premeditated murder), 109 (abetment) and 34 (common intention) of the Pakistan Penal Code on the complaint of the deceased’s father. However, during the investigation, Section 354 (assault or criminal force to woman with intent to outrage her modesty) of the PPC and Section 7 of the ATA, 1997 were incorporated in the FIR.