Nuke diplomacy answer to US concerns

Nuclear terrorism is a matter of great concern for all

Pakistan is in the eye of the storm regarding the stewardship of nukes. With no foreign policy in place and hiking internal insecurity clouded by concerns of ‘safe heavens’ for terrorists, questions loom over Pakistan’s capability to safely run nuclear programs.

Pressure is mounting, and Trump’s first foreign policy worry was about Islamabad’s control on nuclear arms. This sent waves of worry for people in Pakistan. Although China has been a close ally, it is cozying up to Pakistan even in the toughest times. The answer to all uncertainties lies in cultivating nuclear diplomacy to dispel any impression that Pakistan has sloppy protection of its nuclear weapons.

Instead of hurling rhetoric about Pakistan’s ‘minimum deterrence’ going into the hands of terrorists, the world should have confidence about its capability, and both civil and military leadership should put their heads together to design Pakistan’s first ever Nuke diplomacy before chaos spreads.

It is not only Trump’s administration that has expressed fear about Pakistan’s nukes programme, it is also a unanimous policy propagated by US officials on various occasions.

The former US secretary of state Hillary Clinton cautioned the chances of Pakistan’s nuclear weapons falling into the hands of jihadists and termed it ‘a threatening scenario’.

In her audio quoted during her last presidential campaign, she said about Pakistan “We live in fear that they’re going to have a coup, and that jihadists are going to take over the government, they’re going to get access to nuclear weapons, and you’ll have suicide nuclear bombers. So, this could not be a more threatening scenario.” 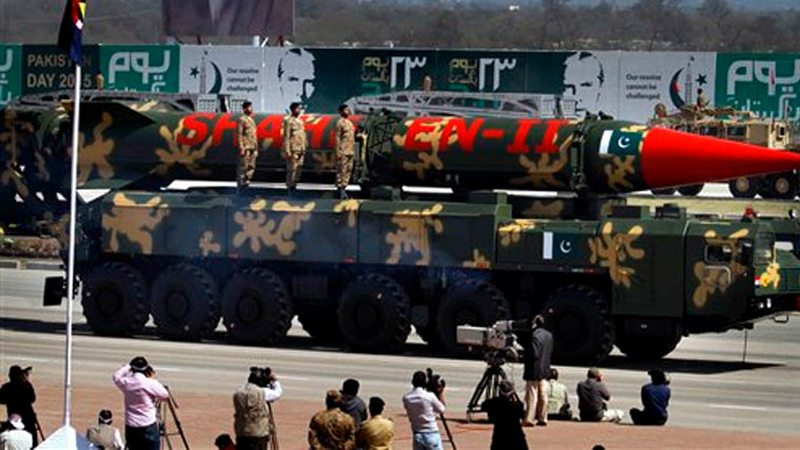 Similarly, then US secretary of defence Ashton Baldwin said that Pakistan’s nuclear weapons were a cause of concern while India had generally demonstrated responsible behaviour with its nuclear technology.

US foreign Affairs Committee exploded into anxiety when Swat was overpowered by an extremist group influenced by the Taliban in 2009. Observing existential threats about the security of Pakistan, it warned that Pakistan was in danger of falling into terrorist hands.

One official had to chant a doctrine that if Taliban militants ruled over Swat Valley 60 miles from the capital, they may advance further to hoist their flag in other areas. A number of Congressmen spoke up against Islamic extremists for making inroads into Pakistan’s politics.  They warned that the US should never let extremists control Pakistan or function along the border with Afghanistan.

Nuclear terrorism is a matter of great concern for all. Terrorists groups including Al-Qaeda, ISIS and Taliban have been pulling out all stops to steal or grab nuke arsenal for serving their   vested interests.

According to a policy brief of the Belfer Centre for Science and International Affairs, Harvard Kennedy School about Nuclear Terrorism Fact Sheet, Osama bin Laden once said, “The Nuclear Bomb of Islam,” asserting that “It is the duty of Muslims to gear up to terrorize the enemies of God.”

The policy brief said that terrorists may acquire nuclear technology as improvised nuclear devices (IND) can easily be transported along the same routes used to exchange drugs, illegal immigrants, and legal goods to the major cities of the world.

It said that a number of terrorist groups may be capable of using nuclear weapons including Al Qaeda, Lashkar-e-Taiba, ISIS, Hezbollah and Taliban.

Mohamed ElBaradei, former director general of the IAEA and winner of the 2005 Nobel Peace Prize said that “Nuclear terrorism is the most serious danger the world is facing.”

To up an ante, the Trump administration has introduced a lot of options to implement its South Asian policy to snub Pakistan on the issue of safe heavens of the Haqqani network and cross border terrorism. Increasing concerns on nuke stewardship is an attempt to exert more pressure on Pakistan. Violating Pakistan’s sovereignty, the US may intensify drone attacks. The option of physical pursuit can also not be ruled out.

In the May 2 incident, it has proved its capability when it killed Osama bin Laden by sneaking into Pakistan. Pakistan could not do anything but make condemnations and claim it would never let any country undermine its sovereignty.

It appears that Pakistan has no option but to eat a humble pie, so a better strategy is to outline nukes diplomacy by engaging the US administration on the issue. Pakistan has well-versed diplomats, and foreign affairs experts, especially Muhammad Mehdi and former foreign secretaries who have extensive experience of figuring out precarious situations. With their knowledge and acumen, Pakistan can convince the world that Pakistan is a responsible country and is prudent about keeping nuclear weapons safe.

The writer is a senior journalist working for CRIOnline, China Plus and China Today. He also writes for local and international print media on International relations and diplomacy. He is a fellow of ICFJ and a recipient of China friendly Netizen 2017 award. He can be reached at yaseerkhan@hotmail.com and tweets at @yasirkhann