The life and times of Saloni Bokhari 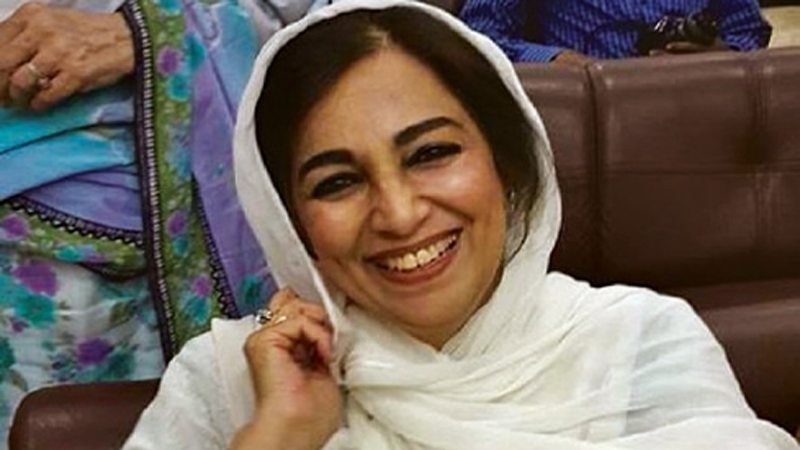 Syeda Saloni Bokhari was one of the founding members of Pakistan Tehreek-e-Insaf (PTI) and the president of the party’s women wing in Punjab.

She passed away on Friday after a year-long battle with Leukemia.

Her colleagues in the party’s women wing have fond memories of the late politician. They say that Bokhari had joined Imran Khan’s cause after a visit to Shaukat Khanum Memorial Hospital (SKMH) with her mother-in-law in 1996. They say that after briefly working at SKMH, she joined Imran to form PTI.

During the 1997 general election, she campaigned with the party and despite the loss the party suffered she remained determined. The defeat further strengthened her resolve and she motivated other members of the party to continue their struggle for change, they say.

Bokhari was again chosen as a candidate for the election in 2002 and spent more time campaigning for Imran than herself, they say.

They add that she led the PTI women workers during the lawyers’ movement for the restoration of judiciary in 2007 and stood alongside Imran during his visit to the University of the Punjab when he was ambushed by members of Islami Jamiat Talba.

Shamsa Ali, a former general secretary of the party’s women wing in Punjab, told Daily Times that Saloni was an ethical politician and “she used to always speak the truth”.

“She stood with Imran during the hardest of times because she believed in his vision of change and would always remind us about the things this country has given us, and how it was our duty to give something back,” she said.

“It is not easy for a woman to enter politics in this country but she handled the pressure so gracefully that more women were inspired to join politics because of her,” she said, “Her determination made her popular among women and youth and she was the backbone of the party.”

Shamsa further said that Saloni gave her blood and sweat to the party. She was from an affluent family and always helped the party financially because she firmly believed that it was the duty of the party members to strengthen their leader, she said.

PTI MPA Saadia Sohail Rana said that during the 12 years that she and Saloni spent together, she found in her a mentor and a loving friend.

“I do not have a political background and Saloni helped me in my political career,” Saadia said, “She was an example for the women in the party.”

Saadia said that when she broke her arm during the violent clashes of 2014 dharna, Saloni cared for her like a mother despite her own injuries. She added that during the dharna, her son was sick back at home but she never appeared worried in front of anyone.

“I was aware of her problems and during the dharna, she took me to one side where no one was watching and she started crying,” she said.

She further said that during the dharna, when the police fired teargas shells at the protesters, she ran towards Imran when she saw him standing alone.

In 2016, her mother passed away in her 90s. The same year she was diagnosed with Leukemia in November.

She further said, “Her smile was the most beautiful thing about her because it gave everyone around her hope.”

“When she grew weak, I went to meet her,” she said, “I told her that I loved watching her smile and she smiled for me.”

She said that till her last moment, Saloni was concerned about Supreme Court’s (SC) verdict in the then ongoing case against Imran. “She wanted to live to see Imran become the prime minister and wanted to contest the 2018 general election,” she added.