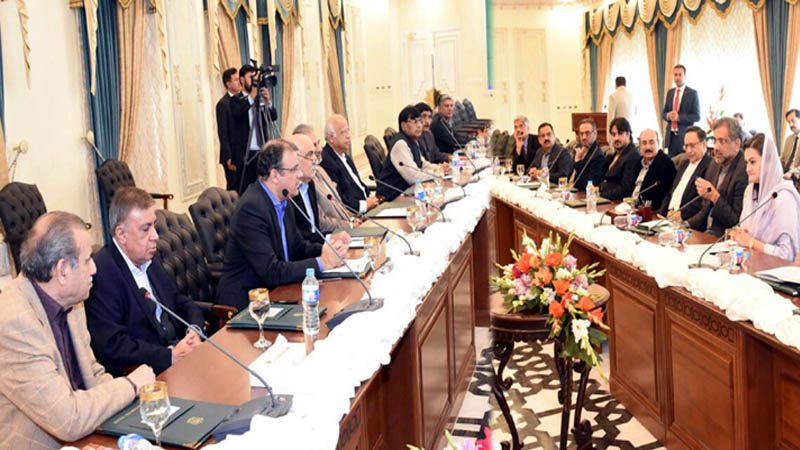 “There is no political crisis in the country and elections will be held on time. All the elected assemblies will complete their constitutional tenures,” said during a meeting with a delegation of the Council of Pakistan Newspaper Editors (CPNE) at the Prime Minister’s House.

The prime minister said from now onwards the political decisions would be made in polling stations and not in courts. “We do not see any instability. Whatever may be the case I won’t dissolve assemblies and elections will be held on time,” he added.

For the first time in the history of Pakistan, civil and military leadership were on the same page, Abbasi said, adding that keys to the treasury were in his hands. To a question, he said that Nawaz Sharif was a political reality. To another query, he said, “Nawaz Sharif has never advised me on how to run the affairs of the government. However, I ask for his advice whenever I feel the need to do so.”

“As prime minister, I have complete authority. People voted for Nawaz Sharif and not me. FATA will be part of KP but it cannot happen overnight.”

To another question, Abbasi said that the PML-N had matured a political party. “Right after three days of the disqualification of Nawaz Sharif a new prime minister had taken charge,” he said, adding that the political turbulence had also affected the China-Pakistan Economic Corridor (CPEC). “The last caretaker government was made with the consent of all parties. It issued 45,000 arms licences and even did more corruption than Zardari,” the prime minister said.

He also said that ministers should not issue statements against state institutions.

Abbasi assured the delegates that the government would continue to provide every possible facility to the media in discharge of their professional duties.

The prime minister held separate meetings with delegations of the All Pakistan Newspapers Society (APNS) and CPNE, and said that the issues raised by media organizations would be duly considered.

Meanwhile, the National Security Committee (NSC) Monday said that Pakistan cannot accept the unilateral decisions taken by the Trump administration on Al-Quds and that the country would continue to remind the United States about its moral and political responsibility towards a just and fair resolution of the issue.

The committee maintained that Pakistan would also continue to impress upon the US administration the need to revoke the steps taken in this regard.

The NSC condemned the terrorist attack on the Bethel Memorial Methodist Church in Quetta on Sunday, terming it against the fundamental tenets of peace and tolerance taught by Islam.

The foreign secretary briefed the meeting on the OIC’s Extraordinary Summit and Council of Foreign Ministers Meetings on Al Quds Al-Sharif held in Istanbul on December 13, following the decisions taken by the Trump Administration to recognise Jerusalem as Israel’s capital and its announcement to shift US Embassy from Tel Aviv to Jerusalem.

Observing that these two decisions had created an incomprehensible situation not just for the Muslim Ummah but also for the international community in general, the committee emphasized that the establishment of a sovereign Palestinian state remained a major objective of the Muslim Ummah.

The committee also reviewed the rapidly evolving security situation in the Middle East as well as the latest developments in Pakistan’s relations with the GCC states and Iran. After thorough analysis, the meeting reaffirmed that Pakistan would continue to work for the unity and solidarity of the Muslim Ummah, for which it would intensify its efforts in view of the growing challenges.

The interior secretary apprised the committee of the progress made in each of the 20 areas of the National Action Plan (NAP). The committee observed that while fair progress had been made in the implementation of the NAP, certain areas, such as policy and institutional reforms, needed more commitment and attention.