The Republicans have momentum on the tax cut. How did it come to this? 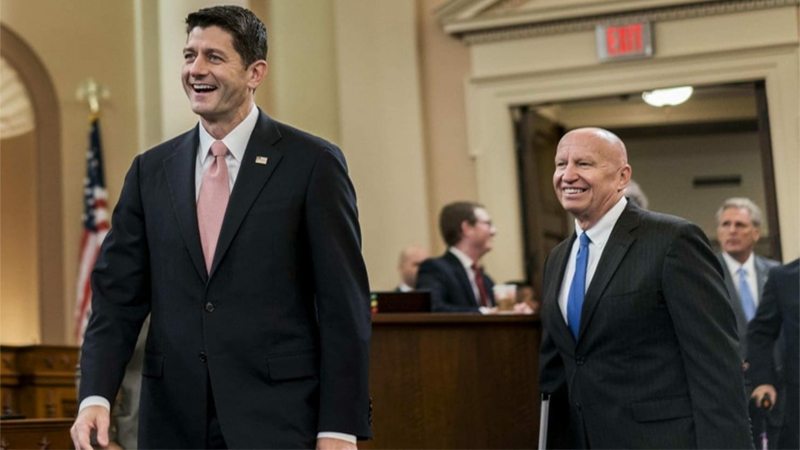 According to reports, House and Senate Republicans are on track to reconcile their tax plans and get them to President Trump to sign before Christmas, if not before the last days of Hanukkah. The fact that it’s a highly unpopular piece of work that will create lasting damage to our economy, our income distribution and our fiscal accounts begs the question: How did we get here?

Both the product – the tax plan itself – and the process that got us to this moment have been roundly and justly criticized. The plan largely redistributes income upward, exacerbating our already high levels of inequality, and does so at significant cost to the deficit. It favors asset holders (and inheritors) and tilts against wage earners. It incentivizes American multinational firms to do more, not less, offshoring. It vastly complicates the tax code and opens large loopholes to classify income as one of the types that’s favored by the plan. And by dint of its deficit financing, it sets up an attack, already underway, on safety-net and social insurance programs.

It’s some combination of laughable and outrageous for Republicans to worsen the deficit to pay for the above, and then point to that higher deficit as a rationale for cutting programs that help the very people who get nothing (or less) from the cuts themselves, but that’s the reality.

The process has been as bad as the product. The most recent kick in the head is the one-page, Treasury “analysis” that assumes growth effects that more than offset the plan’s cost. These results have been skewered by just about anyone who isn’t being paid to believe them. Then there’s the fact that the plan has been rushed through with only Republican input and votes, no public hearings, no transparency, to the point that senators were scratching changes into the margins of their version of the bill at 2 a.m. on the night it passed. Predictably, unintended effects (marginal rates over 100 percent for some unlucky taxpayers) and sweetheart deals for favored donors abound, including car dealerships and oil drillers.

Obviously, Republican control of the administration and the Congress, along with the budget process to avoid the Senate filibuster, provide the proximate explanation for the outcome, but let’s peel that (rotting) onion back and consider what led us to this benighted moment in time.

Trump, the faux populist: Donald Trump campaigned on helping those on the wrong side of the inequality/globalization divide, but as president, he has betrayed these voters at every step. His support for health-care and tax plans that take from the poor and middle class and give to the rich are a big reason we’re where we are.

Facts on the run: Trump and the administration’s daily regimen of lying about pretty much everything that comes up is by now an expected part of the day, such that we’re inured to the dismissal of truth as “fake news.” So when the administration sold their plan as a deficit-reducing “middle-class miracle,” there was little shock or outrage to see facts that showed the opposite.

Public indifference: In fact, the plan’s unpopularity suggests that most people aren’t fooled. But neither are they particularly engaged. Compared to the health-care debate, the public seems resigned to an unjust outcome. One reason may be that taking away something concrete – affordable health-care coverage – is a more intuitively obvious affront than 500 pages of changes to the tax code.

The zombie trickle-down argument: Regular folks tend not to believe that the way to help them is give corporations a big tax cut. But that was the story that we heard from every politician who voted for this mess, despite decades of evidence against it. I found myself in dozens of debates over the past few months, where the most important question – Why on Earth are we still debating whether tax cuts generate enough growth to offset their costs? – was hardly ever asked.

Inequality and the dominance of the donor class: If you told a stranger to our land that we have historically high wealth concentration and a political system driven by donor dollars, and then asked her what type of tax plan does she think would be on offer, she’d predict one that looks a lot like this one.

The devaluing of public goods: Putting aside the nonsense scores that the tax cut will more than pay for itself, less revenue will mean fewer public goods. Yet there’s no outcry about our deteriorating infrastructure, schools, climate, public lands, water systems and so on. Either people believe that there’s no connection between taxes and the things they pay for (which, by the way, is part of the myth the trickle-downers are selling) or they just heavily discount future losses. The lack of a conservative center: Republicans have been pulled so far to the right that there are no leavening influences. Center-right principles, such as fiscal rectitude or honest debate, get lip service but few, if any, votes.