To this day, Pakistan’s non-Muslims have failed to understand why sovereignty could not rest with the people

Recently, while hearing a case pertaining to the mistreatment of minorities — an honourable judge of the Supreme Court, expressing sympathy for their plight, suggested that it might be beneficial to this group if society began treating them like special children.

And while we understand the likely intentions behind this statement, it would nevertheless be amiss if we did not attempt to seek a little clarification. Special children are an important part of any society. And whether suffering from physical disabilities or mental health issues — they are in need of extra love, care and compassion. Yet as Britain-based language therapist Shahbana Majeed has pointed out: here, in Pakistan, special children are all too often and shamefully considered the wretched of the earth.

Similarly, due to institutionalised social and religious persecution — minorities in this country are also marginalised from the mainstream; extending to the realm of socio-politics. And what they need more than anything is justice; to be treated as equal citizens of the state. And the honourable Supreme Court judge has acknowledged that this is not the case.

The story of Pakistan’s minorities is a long and tragic one and it flies in the face of Jinnah’s vision for this country. Indeed, his first ministerial cabinet included around a dozen members from these communities; with total participation on a nationwide scale exceeding some 20 percent. If only the Quaid had lived. Pakistan would have been a very different country. One where minorities would be secure and safe. And not one from which they flee in order to escape the very real risks to their lives.

In order to see where it all began going wrong, we must return to the Objectives Resolution of 1949; which represents the first deviation from Jinnah’s notions of principled democracy. Kumar Dutta, a politician from what was then still East Bengal, staunchly opposed this, remarking: “if this resolution came in the life of Jinnah it would not have come in its present form, let us not do anything which lead our generations to blind destiny”. Another Hindu member of the committee of Fundamental Rights raised the following: “Why ulemas are insisting on this principle of Islam whereas India has Pandits but they do not demand things like that. Individuals do have religion but the state had not. So we think it a great deviation in our beloved Pakistan.”

Non-Muslims were rightly fearful that the Objectives Resolution, by putting religion at the heart of governance, would negatively impact them. And it has been so for the last 70 years. The country’s first Prime Minister, Liaquat Ali Khan, however defiantly defended the resolution.

The Objectives Resolution was just the first step on the path towards the Islamisation of Pakistan. The latter gained momentum under the PPP. And though it had no sympathy for the religious right — its founder, nevertheless, came up with a new slogan: Islamic Socialism

“We as Muslim believed that authority vested in Allah Almighty and it should be exercised in accordance with the standards laid down in Islam.” Yet he was also keen to stress that this is no way would rob minorities of their fundamental rights.

To this day, non-Muslims have failed to understand why sovereignty could not rest with the people. But the Objectives Resolution was just the first step on the path towards the Islamisation of Pakistan. This was a journey that gained momentum under the Pakistan Peoples’ Party. Though the latter had no sympathy for the religious right — its founder, nevertheless, following the party’s 1971 electoral win came up with a new slogan: Islamic Socialism. And it was not long before a deal was done with the Islamist parties, offering them ample political space to further their theocratic agendas.

Then in 1974, Bhutto caved to mounting pressure by the religious right-wing to declare Ahmadis non-Muslim. It has been said that his appointment of Gen Zia to the position of Army chief was meant to appease the Jamaat-e-Islami as well as other religious forces. Fast-forward to 1977 and Gen Zia seized power from the civilians. And he soon found that he could quite easily rally support for his dictatorship under the banner of Islam. In addition, the 1979 Soviet occupation of neighbouring Afghanistan helped Zia to strengthen alliances with religious groups; thereby establishing the mullah-military nexus.

Nineteen eighty-five saw the eight amendment fully enshrine the Objectives Resolution in the Constitution; previously it had only featured in its preamble. Though it was the introduction of the Hudood Ordinances — which in no uncertain terms serves to humiliate the women of Pakistan — that remains the most controversial legislation enacted by the military dictator. This brought with it harsh provisions on blasphemy which took effect during 1980-1986 by way of supplementary clauses added to the Pakistan Penal Code.

It was also during this period that minorities were subjected to separate electoral roles; with those identifying as Muslim being made to sign a certificate of faith in ‘the end of prophethood’, thereby denying the religious beliefs of the Ahmadi community. Yet this is not the end of the story. For in 1998, through the 15th amendment, the then Nawaz Sharif government proposed imposing sharia law across Pakistan. However, it failed to get parliamentary approval. According to some reports, it was just one vote that thwarted its passing. 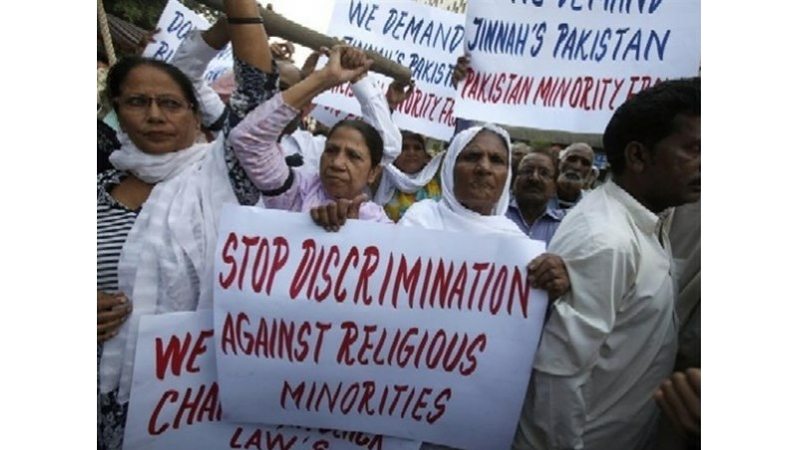 Unfortunately, such efforts to place religion at the heart of politics were not confined to the geographical boundaries of this country. This may explain how the culture of Kalashnikov jihadism took root in the region. But be that as it may, minorities here in this country remain the primary losers. The latter has gone from comprising around 20 percent of the population to just three percent. Furthermore, the Pakistan Constitution bars minorities from holding the highest offices in the land. Provisions affording safeguards to the country’s minorities — Articles 25, 27 and 36, pertaining to protection of rights as well as due representation at both the provincial and federal level — are few and far between.

Hate-preaching mullahs have thus been able to seize the institutional persecution of minorities to foster an environment of fear, repression and subjugation. The state must reclaim its writ. A good place to start would be by affording all groups the right to elect their own political representatives. Hate material taught in public schools needs to be removed from the curriculum; replacing it with the role of minorities in Pakistan’s development.

And when the state has signed off on all of this — it must then turn its attention to investigating how it is possible that a group that collectively comprises just three percent of the population is at the receiving end of half the blasphemy cases that are registered. The majority of defendants, including Asia Bibi, continue to languish in the country’s prisons — having already been failed by Pakistan’s criminal justice system — due to fear of an Islamist backlash.

And lastly, the results of the 2017 in terms of minority statistics have not been declared. Meaning that those individuals who are excelling in various fields like media, sports, the civil service, the judiciary and the armed forces — are neither recognised nor rewarded. If this continues for another decade, Pakistan will be ‘purified’ of its minorities. The question therefore remains as to whether those at the helm think this will be good or bad for the country.

The writer may be reached at Kaleem.dean@mail.com