Most of the water samples recently collected from 13 districts of Sindh, including all six districts of Karachi, have been found to be unfit for human consumption

Safe drinking water is an integral human right, but remains inaccessible for the majority of Pakistanis, despite promises made during the tenure of the ruling party. It is a source of great indignation for the federal and provincial government that the majority of water samples collected from surface and underground sources in 13 districts of Sindh , including all six districts of Karachi, have been found to be unfit for human consumption.

The Supreme Court in December last year, constituted a judicial commission to investigate the authorities’ failure to provide potable drinking water and improve sanitation across the Sindh province. This inquiry commission was headed by a sitting Sindh High Court judge, Justice Muhammad Iqbal Kalhoro, who ordered a province-wide inspection of water and sanitation schemes by the district and sessions judges to determine the actual status of the schemes. After completing the hectic six-week long proceedings and inspections, the commission submitted its130-page comprehensive report to the apex court, concluding that various water and sanitation-related projects had not been completed due to corruption, mismanagement and poor monitoring systems of the provincial government.

This matter started when a senior practicing lawyer Shahab Usto, submitted videos showing the state of water, disposal of sewage and waste in Larkana, Shikarpur, Jacobabad, Sukkur, Hyderabad, Kotri, Thatta, Badin, Mithi, Umerkot, Mirpurkhas and Karachi. This was the first strong initiative and we should acknowledge it as a commendable action by a citizen of Pakistan. Such brave steps should be taken by all the citizens of Pakistan.

According to the recent report released by the Supreme Court’s Judicial Commission on water and sanitation in Sindh, more than 75 percent people in Sindh drink unsafe water.

According to the recent report released by the Supreme Court’s Judicial Commission on water and sanitation, more than 75 percent people in Sindh drink unsafe water

In addition to highlighting various dismal facts about the water and sanitation situation in Sindh, the report has declared that “water is life and access to unpolluted water is the fundamental right of every citizen”. Despite the fact that the right to safe drinking water is declared a fundamental human right at the national and international level, a large number of people (71 percent) drink unsafe water in Sindh and continue to fight to survival against water borne diseases which include cancer. Looking at the report prepared by the Commission, gives the perception that people in Sindh drink to death not health.

The report highlighted that in the Province of Sindh there are filtration plants in several cities which can provide potable water after treatment but due to inefficiency, lack of interest and the corrupt practices of officials operating the filter plants, they have been rendered almost redundant. Moreover, the commission’s report said that laboratories set up at some of the filtration plants were merely eyewash, as no test to determine physical, chemical and microbiological parameters of water was being conducted at any of the labs. Water full of bacteria was being supplied to people for drinking without any sense of responsibility. 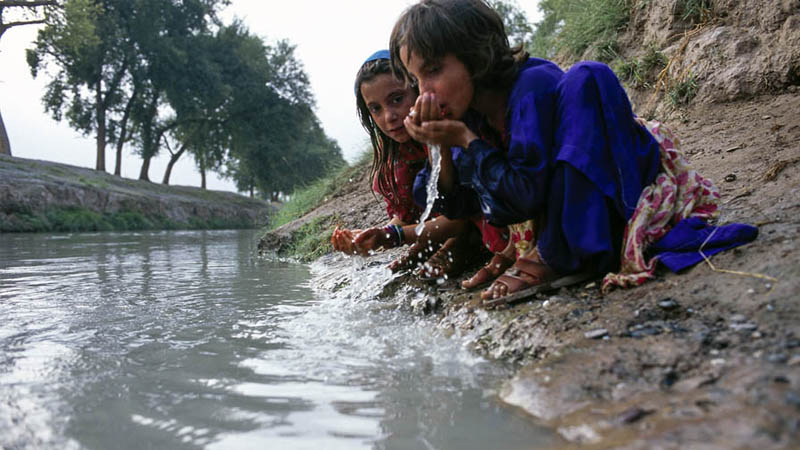 A few days ago I had a chance to visit some areas of interior Sindh such as District Khairpur and the outskirts of Sukkur. Within these areas most of the villages were in miserable condition and had severe issues of water. Most importantly, these areas lacked access to safe drinking water, had poor sanitation, natural gas and education facilities.

A large proportion of the population is concentrated around the poverty line, which means a relatively small decrease in income of poor families can bring a significant number of people below the poverty line if adequate attention is not paid to their development needs. While visiting these areas I had a talk with some of the locals, they said there was no source of clean drinking water and almost 98 percent population of their village is suffering from liver and stomach related diseases. Similarly, 80 percent residents are infected by HBV or HCV. HAV and HEV are water-borne diseases, mainly caused by contaminated water and unhygienic food.

The district administration has not made adequate arrangements to provide drinking water supply and sanitation facilities to the neglected communities. However, the Sindh Government allocated Rs 11.76 billion for development schemes which are meant to improve the provision of clean drinking water and sanitation in the province in the fiscal year 2017-18. The JEC report highlighted that provincial authorities utilised 29 billion rupees on 1337 schemes of water supply and drainage during the last five years while 582 of water supply and drainage schemes out of 1337 are non-functional. Sadly the implementation process was only in the books.

I personally believe that the government must look into the issue and supply clean potable water to avoid an outbreak of cholera, diarrhea, pneumonia and other water-borne diseases in Sindh.

The writer is a social and political activist based in Lahore. He has done his Maters and MPhil in Communication Studies. He can be reached at [email protected], tweets at Salmani_salu