Raheel Shareef will lead the Coalition forces by personal example and ignite in them the fire of passion, commitment, service and honour just as he did while he was COAS Pakistan Army

It was a unique privilege (for many different reasons) to be invited along with a handful of senior media colleagues to attend the inaugural meeting of the Islamic Military Counter Terrorism Coalition (IMCTC) under the theme ‘Allied Against Terrorism’ on Nov 26 in Riyadh.

With the Ministers of Defence, Senior military officers of 41 Islamic and Muslim-majority countries Saudi Crown Prince Muhammad Bin Salman (known as MBS) pledged in his inaugural address not to allow extremists ‘tarnish the name of our beautiful religion’ and vowing to ‘pursue terrorists until they are wiped from the face of the earth’.

The formation of a (then) 34-member ‘Islamic Military Alliance’ with a joint operations centre in Riyadh was announced in December 2015 by MBS (then) Deputy Crown Prince and Defence Minister, with the aim to ‘coordinate’ efforts to ‘protect the Islamic nation from the evils of all terrorist groups and organisations’ because terrorism ‘should be fought by all means and collaboration should be made to eliminate it’.

This generated confusion within Pakistan because the alliance having states with majority Sunni Muslim populations and with Iran, Iraq, and Syria being excluded, it gave the perception of it being a ‘Sunni’ coalition. Pakistan decision not to send any ‘boots on the ground’ to Yemen countered the perception of Pakistan being engaged in an anti-Shia agenda. However, given the sensitivities of the very special nature of the Saudi-Pakistan relations and our good relations with Iran, this remains a very sensitive subject. We cannot ever be part of an anti-Iran coalition, for its part Iran also has to exercise restraint or one gets a perception of their forging an anti-Sunni initiative. In that case the Sunnis have a right to defend themselves!

It was a matter of great pride that in the presence of so many distinguished generals from many countries as candidates, a Pakistani was chosen for this singular honour. In his maiden speech, Gen Shareef dispelled the impression that the IMCTC was sectarian in nature, that it was directed against any country or had any ulterior designs

With the Islamic State (IS), Daesh and other groups with agendas of spreading violence in almost every Muslim country, terrorism is currently being battled individually by each of the affected counties, mostly not very effectively. The IMCTC could play an extremely potent role by coordinating efforts against a common enemy by working with various countries and other international countries to support counterterrorism efforts.

Agreeing to be part of the coalition Pakistan had withheld its decision about the extent of its role till the Terms of Reference (TORs) were finalised. Our principled stand was that our troops would not take part in any military initiative aimed at any other Islamic country.

The final declaration putting the responsibility on the member states to decide themselves the extent of their participation in the coalition effectively provided Pakistan much needed space to maintain balance in its ties with Saudi Arabia and Iran, both good friends. 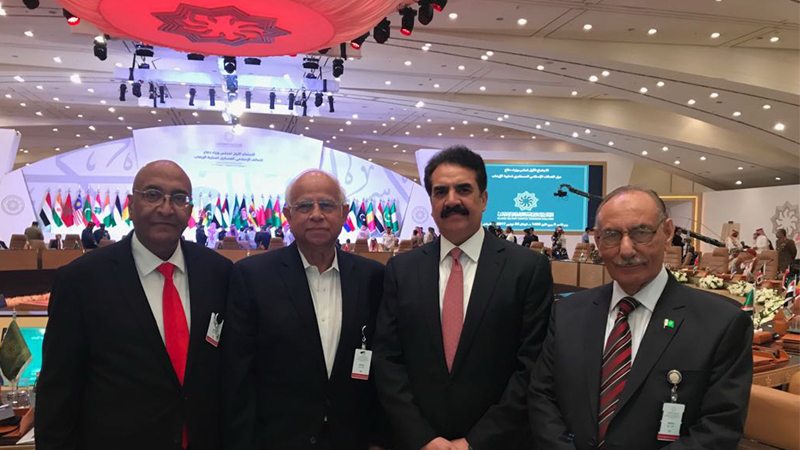 With this ambiguity lifted, it is clear that participation of coalition states will be defined in accordance with their capabilities and resources, as well as in accordance with each country’s desire to participate in a given military operation. The Pakistanis’ official ‘show of force’ was very visible with the Prime Minister Shahid Khaqan Abbasi, accompanied by the Army Chief Gen Qamar Javed Bajwa, taking part in the IMCTC dialogue the next day on Nov 27, 2017. Earlier Gen Bajwa had made a very visible and much needed visit to Tehran to meet with the entire Iranian hierarchy, this visit was tremendous, it underscored our commitment to a unified Muslim Ummah.

For the Pakistan invitees the highlight was the announcement by the Saudi Crown Prince of Gen (Retd) Raheel Shareef’s appointment as the Military Commander of the Alliance, a decision taken on merit and with consensus, said the Saudi Crown Prince. It was a matter of great pride that in the presence of so many distinguished generals from many countries as candidates, a Pakistani was chosen for this singular honour. In his maiden speech Gen Shareef dispelled the impression that the IMCTC was sectarian in nature, that it was directed against any country or had any ulterior designs. Not mincing words he confidently asserted strongly that the sole objective of the alliance ‘is to counter terrorism’ and the additional aim is to promote the moderate image of Islam.

While one or two of the attending Defence Ministers did hint about a hidden agenda during their turn to speak, this clear and unambiguous message should assuage apprehensions. Minister after minister agreed with Gen Raheel’s submission that the individual states lacked the required level of synergy and resources. The IMCTC was being geared under Gen Raheel’s command for intelligence-sharing and building the counter-terrorism capacity of its parties. The deference given to Gen Raheel Shareef’s stature and reputation by MBS and other dignitaries confirmed that he would play an important role in coordinating with international bodies to build alliances and cooperation on a global scale. All Pakistanis should be proud of the visible respect and honour given to him.

Despite Pakistan’s joining the alliance in April 2017 conditionally till the TORs was defined it clearly did give the go ahead for Gen (Retd) Raheel Shareef to head the coalition as per the Kingdom’s specific request confirming his outstanding personal qualities and calibre as a leader and services to Pakistan as a soldier.

One of the most popular of armed chiefs in recent times, Gen Raheel Shareef’s reputation soared after the army crackdown on the Tehreek-e-Taliban Pakistan (TTP) which led to sharp decline in violence in Pakistan in general and in Karachi specifically. One does not doubt that Raheel Shareef will lead the Coalition forces by personal example and ignite in them the fire of passion, commitment, service and honour just as he did while he was COAS Pakistan Army.

Meeting a number of Pakistanis in Saudi Arabia, one got the distinct feeling that they were looking up to Gen Raheel Sharif to intercede with the Saudi authorities to improve the lot of Pakistanis in Saudi Arabia who feel being treated as third and even fourth class citizens. They look upto the Crown Prince to deliver on his promises of equal treatment of all Muslims irrespective of their race and sect.

While Raheel Sharif’ symbolises the Pakistani soldier’s grit, determination and loyalty, one expects MBS to reciprocate the same attitude to the many hundreds of thousands Pakistani eking out a living in the Kingdom while striving hard to bring Saudi Arabia to where it is today, a potent leader of Muslim countries getting willing respect in the world. Talking to a disparate cross-section of Pakistanis in Saudi Arabia one believes will MBS live upto the great promise he exudes, not only for Saudi Arabia but for the entire Muslim Ummah.

The Arab world has been trying since decades to develop effective military alliances but these have been Arab-specific rather than being for the entire Muslim world. Unfortunately, because of the many groupings (economic, political, etc.) differing national objectives and given the nature of the threat faced and the fact that some of the members are beset with their own wars, insurgencies and endemic corruption this has not had any success.

For our part we have to understand that Iran must not remain out of the Coalition, this would be a potential disaster for Pakistan as a well-integrated Muslim nation. With our foes gathering strength and spreading their tentacles silently but surely, this is not the time for differences but to strive for unity.

While disagreement among member states exists about which non-state actors are ‘terrorist’ organisations, these differences must be put aside and the IMCTC must be allowed to take root. Gen Raheel Sharif has a unique position to act as a catalyst to effect reconciliation in the Ummah (the writer is a defence and security analyst).