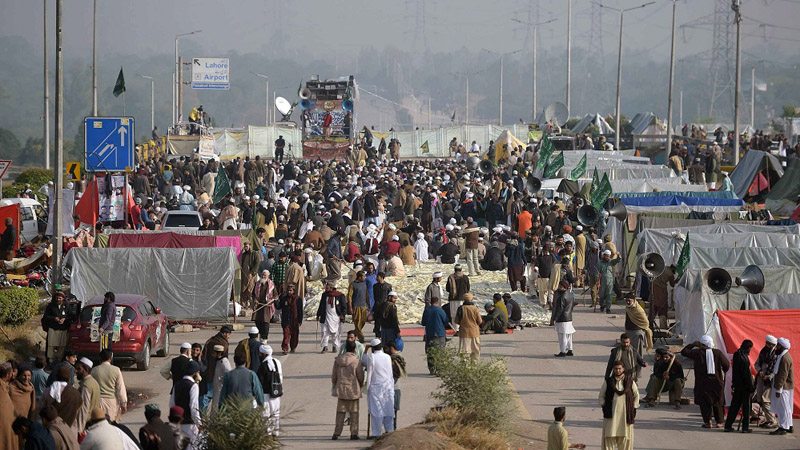 ISLAMABAD: The state of Pakistan mortgaged its writ willingly yesterday by signing an agreement with religious protesters camped at Faizabad, which at best is an embarrassing blot on its face and at worst resembles the humiliation Pakistan had to endure in 1971 when the saviours of the nation signed off the dismemberment document. True that the agreement with these few hundred religious protesters lead by a cleric is not comparable to the surrender document with Indian army. But it is also a fact that the state voluntarily surrendered all its authority and powers to ensure people’s safety and right to penalize the violators of its writ. In the times to come, this shortsighted move by all organs of the state would haunt us in innumerable ways.

Whereas the government demonstrated its utter disregard for the parliament, it also showed how easy it is to blackmail political parties on religious grounds when the patronized violent clerics are out for blood of politicians. Opposition parties showed absolute lack of moral courage to own their actions in the parliament. This necessitates that all the parliamentary record must be made public for scrutiny by the masses.

In the face of this agreement, sheer failure of the security apparatus including the intelligence, law enforcement, defence and the executive was demonstrated. It was demonstrated that a few hundred ‘miscreants’ chanting slogans against parliament, government, judiciary and army can put the capital under siege and the maximum solution available with the organs of the state is to let them go scot-free and pay money as well. This happened despite claims from the military establishment (through WhatsApp messages and an audio message by an unnamed, self-proclaimed army officer) that this violent crowd was there on the behest of India’s RAW and America’s CIA.

Government invoking Article 245 and calling army to assist in law enforcement established that it has no strategy to deal with aggressive mobs committing violence against citizens, media, government functionaries and vandalizing public and private property, especially when it is armed with religious slogans. This is like providing a very easy route to the enemy for any future excursions if they want to hurt Pakistan. 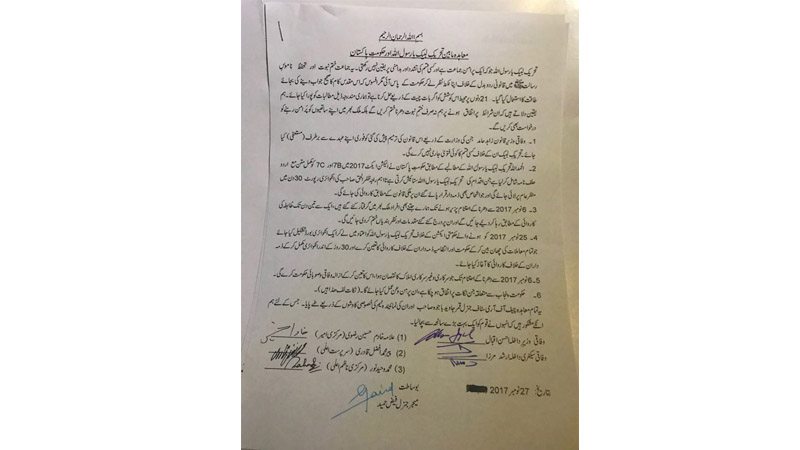 The agreement signed by a serving Major General as broker, sets a dangerous precedent. It potentially puts our wide-ranging operation Rudd-ul-Fasaad in jeopardy and accepts the extremists’ narrative.

One wonders where is the ‘alternative narrative’? Once again, it’s an easy recipe for the enemies of Pakistan to follow if they ever decide to hurt Pakistan from inside. Rather, money was distributed among the miscreants with pats on the back. Last time when law enforcement officials gave pat on the back of a miscreant, it was Gullu Butt in Lahore.

The way this agreement has been reached has put a big question mark on Pakistan’s law enforcement as well as judicial process. Without resorting to legal procedure, the cases registered against protesters under the Anti-Terrorism Act have been quashed vide this agreement.

Our security establishment must keep this blunder in mind when the next time it reminds the world that Pakistan’s judiciary is free to handle the terrorism cases against LeT terrorists.

The state has proven beyond any doubt that that not only the loss of life during such acts of terrorism would go unpunished but also the destruction of property would be paid for by the government from the taxpayers’ hard-earned money.

The state, in fact, has rewarded the ‘lowlife scoundrels’ who played havoc with civic life for over 20 days in the capital and three days in the rest of the country.

The reward, needless to say, came from the money the citizens pay the state for providing security. This has badly defeated the narrative built by the Supreme Court’s five-member bench in the Panama scandal against Sharif family: the law is certainly not equal for everyone.

Finally, the clash of ego within the state organs is out in open. To the extent that the aggressive and more powerful party to this conflict is ready to pay any price, be it peace in cities or the life of citizens in order to mutilate the other side.