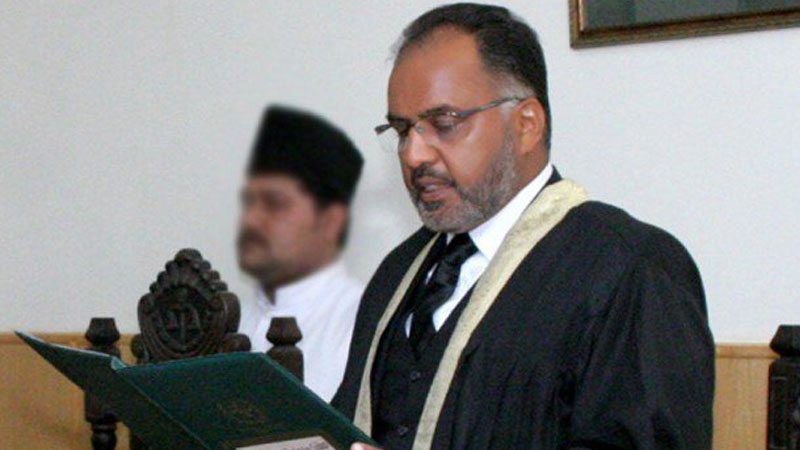 LAHORE: Interior Minister Ahsan Iqbal on Monday assured the Islamabad High Court that the 21 days-long protest will end today after a press conference attended by government representatives and protest leaders.

Justice Shaukat Aziz Siddiqui expressed displeasure over army’s role in the deal brokered between the protesters staging a sit-in at the Faizabad interchange and federal government.

Resuming the hearing of a case regarding the amendment in a clause of Election Act 2017, the judge grilled interior minister regarding the agreement signed with religious groups after summoning him on a 15-minutes notice.

Justice Shaukat sought an explanation from the minister over the involvement of an army officer. Under which law Gen Hamid acted as a mediator, he asked.

‘In what capacity, the Army Chief assumed the role of guarantor in the agreement,’ inquired Justice Siddiqui.

Iqbal assured the court that the sit-in will end soon.

Justice Aziz remarked that the protesters were creating chaos in the capital for the last 21 days but there was no action, where’s ‘Raddul Fasaad’ he asked, referring to army’s operation aimed at eliminating residual.

Would army allow dharna near GHQ, the judge asked.

The judge observed that the Army officers who were fond of indulging in politics, should relinquish their position and practically join politics.

‘The Pakistan Army should remain confined to its constitutional jurisdictions’ remarked the court and stated that Major Hameed could not moderate the agreement as he rendered his services to the federation.

He also sought a detailed report from the interior ministry regarding the reasons for the failure of the operation.

Justice Siddiqui questioned the administration why police action against the protesters failed. “You will forgive them after squandering billions of rupees of the public money, ” he added.