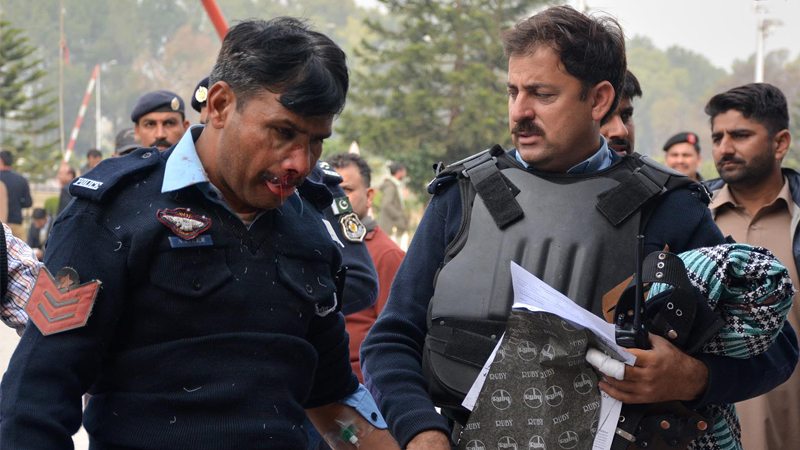 ISLAMABAD/LAHORE/KARACHI: The administration’s crackdown on protesters camped at the Faizabad Interchange on Saturday resulted in the death of a policeman and injuries to more than 200 person, while its reaction in other cities prompted the authorities to halt the operation to avoid human casualties.

According to the information obtained by Daily Times from the Pakistan Institute of Medical Sciences (PIMS) Islamabad, Federal Government Service Hospital (FGSH) Islamabad and Benazir Bhutto Hospital (BBH) Rawalpindi, as many as 195 persons were brought in after the launch of the operation by police.

Around 2,000 followers of Tehreek-e-Labaik Ya Rasool Allah (TLY) led by Khadim Hussain Rizvi continued their protest in favour of their demands, mainly the resignation of Law Minister Zahid Hamid.

Despite repeated attempts of dialogue and giving them warnings, Khadim Hussain Rizvi-led protesters did not surrender. Eventually, the Islamabad administration – in compliance with court directives – launched the operation against them.

According to reports, 162 injured had been brought to PIMS with different injuries until the filing of this report. Of them, 110 were security officials – 61 personnel of the Islamabad Capital Territory (ICT) and other law enforcers and 48 of Frontier Constabulary (FC). The remaining 52 injured were protesters and other citizens, including some journalists.

PIMS Vice Chancellor Dr Javed Akram told this scribe that all of those admitted had minor injuries and the hospital discharged many of them after giving treatment. To a question, he clarified that no one had died at the institute.

Similarly, 17 injured had been shifted to FGSH and most of them were police officials. According to the hospital sources, all of the injured had been discharged after provision of necessary treatment. “None of them was in a life threatening situation,” said a duty doctor, wishing anonymity.

Meanwhile, 39 of the injured were shifted to BBH Rawalpindi, of which four were police officials.

However, sources said that four people died at the hospital, as they could not survive the bullet injuries to their heads.

They identified the deceased as Abdul Rahman of Gujjar Khan, Janzeb of Tanch Bahta and Zuhaib of Dhoke Khabba, while one of them age between 16 and 17 years could not be identified until the filing of this report.

According to details, around 9,000 security officials, including those of FC, launched the crackdown on protesters. Talking to the media before the operation, Assistant Inspector General (AIG) Asmatullah Junejo also hinted at the planned action “any time” soon.

“Army called in to control law and situation in capital,” official Pakistan TV reported, citing an Interior Ministry notification. Hours later, the ministry announced to stop the operation. Talking to the state-run television channel, Interior Minister Ahsan Iqbal said the operation had been halted to avoid loss of human lives.

The minister also claimed that the religious parties protesting in Islamabad had ‘contacted India’, and that the government was investigating the matter.

“They are not simple people. We can see that they have various resources at their disposal. They have fired tear gas shells (at security forces), they also cut the fibre optic cables of cameras that were monitoring their protest,” Ahsan Iqbal added.

Over in Karachi, at least 32 people were injured in different incidents after protests sprung up in response to the government’s operation against protesters in Islamabad. According to hospital sources, some 26 injured were brought to the Jinnah Postgraduate Medical Centre, while six others were brought to the Civil Hospital, Karachi, adding that most of the victims had gunshot wounds.

On the other hand, the police also claim to have arrested more than 16 miscreants for creating law and order situation at Star Gate.

The city wore a deserted look on Saturday after the crackdown of security forces at Faizabad, while protesters had staged sit-ins in around 36 locations. A massive traffic jam was also reported on various roads of the city following the sit-ins.

Star Gate and the Nursery areas remained the most violent spots where scuffle between the police and violent mob continued for hours. The protesters attacked the police with stones while the police resorted to aerial firing, tear gas shelling and baton charge to disperse the protesters.

Some 32 protesters were wounded during clash, particularly on Star Gate, while the police claimed to have arrested more than 18 miscreants with about 40 motorcycles for attacking the police and disturbing law and order at Star Gate. During the scuffle, Memon Goth Police Station SHO Gulzar Khan and Constable Sabir sustained bullet injuries near Star Gate as well.

The sit-ins also caused a massive traffic jam, as bumper to bumper traffic was witnessed in various parts, particularly where the sit-ins were held. The protesters also forced the petrol pumps to shut down in various areas of the city, while multiple markets in the city, including Bolton Market, Ranchore Lane, Tariq Road, Saddar and Electronics Market, were also forced to close. The train service was also affected after the protesters blocked the railway track at Malir Halt, which affected at least ten trains, while hundreds of travelers missed their flights as they were unable to reach the Jinnah International Airport, Karachi, due to the protests.