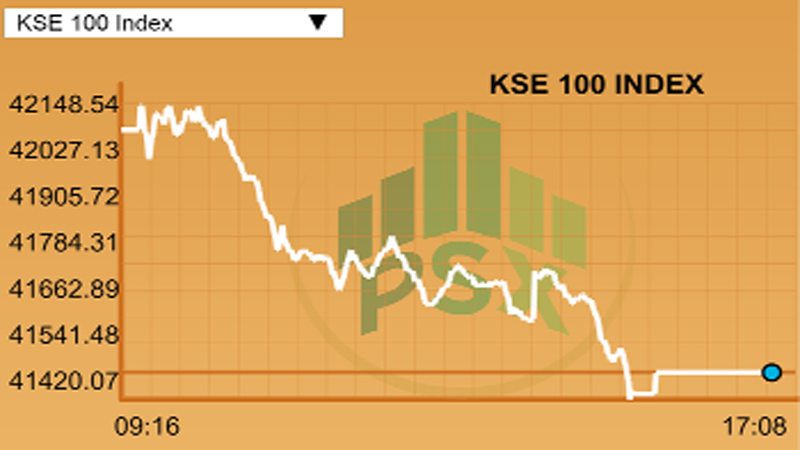 KARACHI: Range-bound session was witnessed on the last trading day of the week as KSE-100 Index oscillated between an intraday high of 102 points and an intraday low of 183 points. Most of the selling pressure was witnessed during the first half of the day due to the last day of the rollover week, which pulled the market down to close at 40,248 points, shedding 18 points.

Volumes stood at 160 million shares for the day, reporting a day-on-day increase of 4.4%. KEL (-6%) led the market as 26 million shares of the power stock changed hands on the back of news that NEPRA will hear reconsideration request filed by Pakistan government for multi-year tariff of K-Electric on December 5. Stocks closed lower on investor concerns for foreign outflows and economic uncertainty. “Securities & Exchange Commission of Pakistan’s (SECP) assurances on workable solution for Pakistan Stock Exchange (PSX) taxes, margin trading securities and trading activity, upbeat data on oil production, oil sales, auto and cement sales for July-October 2017 invited support in selected scrips across the board. Dismal data on current account and trade deficit for July-October 2017 and weak global equities played a catalytic role the in lower close,” Ahsan Mehanti, senior analyst, commented. Mixed sentiments were observed in the banking sector on anticipation of unchanged policy rate in the upcoming announcement of monetary policy. Key stocks such as UBL (-1.81%), NBP (-0.80%) and HBL (-0.47%) closed in the red; while BAFL (+0.25%) and FABL (+0.43%) closed in the green. The outgoing week saw benchmark KSE-100 Index decline by 596 point or 1.5% on the back of pressure in the energy chain (OMC 98 points, power 62 points, refinery 32 points, E&Ps 16pts) where government’s current management and future plans for ‘optimal’ fuel mix for the country’s power generation had suboptimal implications on investor sentiments. Concerns were raised on future outlook of oil based IPP’s, oil marketers, refineries, and explorers who would all be affected when furnace oil based power generation is phased out completely in the long run. Some positive news flow emerged today where recommencement of Attock Gen, an oil based power unit, lifted sentiments towards the sector chain. Average volumes were up 6% week-on-week, while value was down 8%; news flow pertaining to KEL drew significant interest in the metropolis’ power utility. Stocks including NESTLE (-13% week-on-week), PSO (-5%), ENGRO (-3%), UBL (-3%) and HBL (-2%) held 278 points from the index; while PAKT (+15%), KEL (12%), OGDC (1%), MCB (1%) and GHGL (8%) added 153 points. On the sector capitalisation front; food lost 9%, OMCs were down 4%, refineries shed 3%, textile & banks slipped 2% each, while fertilisers lost a percent. E&Ps held firm (+0.1%), while KEL boosted power sector by 2% and tobacco gained 12%. Foreigners sold $6.3m during the week against buying $1.1m last week, while domestic mutual funds sold $3.5m. Selling was concentrated in banks ($4.3m) and cements ($3.7m); whereas buying was seen in E&Ps ($4.1m), OMCs ($1.1m) and technology ($0.9 million).