‘Strangers in the Night’ presents differences of gender, race, and age as mere social constructs 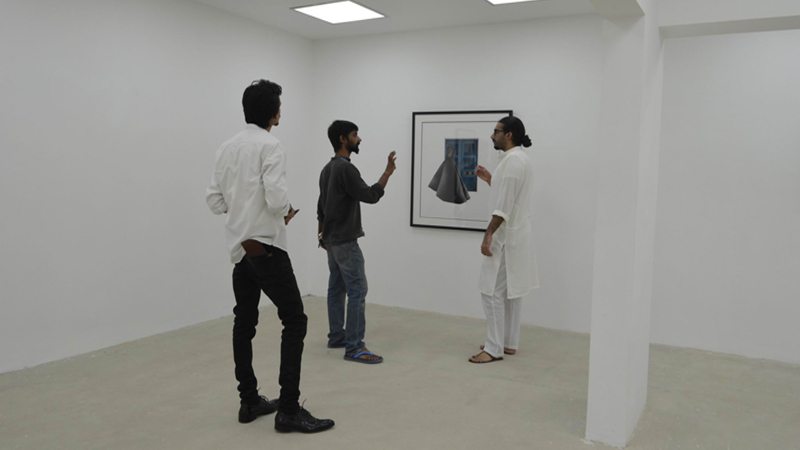 KARACHI: Using a unique medium with charcoal and pen on paper, Artist Usman Khalid has inaugurated his work titled “Strangers in the Night” at Sanat Gallery Karachi on Thursday.

While talking to Daily Times Usman Khalid shared his views, “I have tried to create a dream-like environment to uncover the hidden meaning behind things. I feel a strong force from within that pushes me to look beyond what the normal eye sees or something that truly frightens me.”

Using charcoal and pen, he portrays the vulnerability of human emotions. Khalid believes that once he starts working on a blank canvas, inspiration flows from him like a river and keeps him going on. His creative work, titled “Paint me, she said,” shows a girl sitting on a stool.

He said that the minimalistic and simple drawings bring to the forefront a myriad of themes and emotions. “Tableau Vivant” emerged out of the artist’s love for music, in particular an Icelandic band that he was obsessed with. These images of figures interacting with objects and their environment were conjured from the music, much like a dream that the artist traced onto paper. A study of these works led to a further simplification and dilution of the imagery, and to a growing interest in figures from among the many elements.

He explained that figures in art history have often been stylized to diminish differences of gender, race or age, which serves to reduce these differences to minor variances in form and embeds them in social constructs instead. Over here a similar pattern arises. A floating man upon closer inspection turns out to be, in fact, a woman, given away by the inclusion of the outline of her hair, her bright red nail paint and a lone earring in the suggestion of her ear. As the faces turn away, age is removed from the equation, as is any form of personal identity.

Even the choice of rendering the skin in grey scale, which was experimentation with medium and technique on the artist’s part, serves to remove ethnic markers and seems to challenge the notion of racial differences. 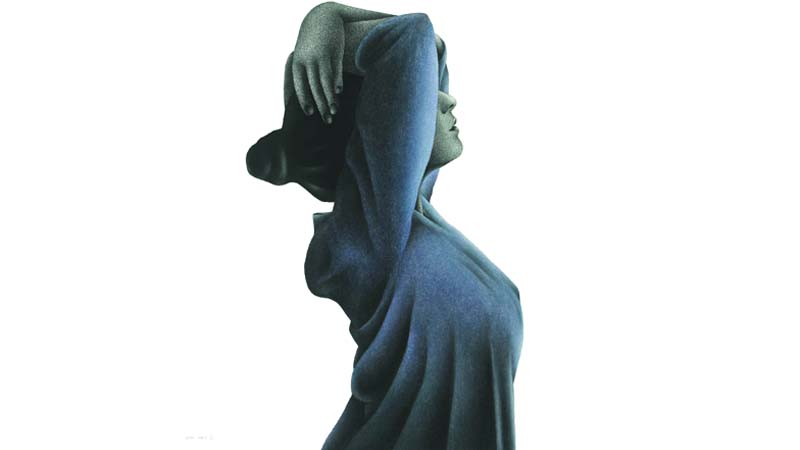 A visitor, Rida Fatima standing with Khalid’s work “Without You” explained that as a result, we see almost no objects or any obvious environments in the current works. As the artist constructed his compositions in his studio, certain elements popped out while others were pushed into non-existence. While the previous series enclosed the figures in a dark space with clearly defined limits, here the background is completely removed and left white. Yet the sense of space is still conveyed through the shadows that the bodies cast. In this way, the work adheres to a more minimalistic sensibility, giving the body even more prominence by removing unnecessary elements, only giving us as much information as needed. The human mind can fill in the blanks and arrive at its own conclusions.

Another visitor and artist, Zahid Mayo shared his experience saying that Usman Khalid’s explorations of the human form take this mystery a step further and create intrigue through omission. He said that the artist does not believe in providing all the necessary information to his viewers, wanting them to engage with his works and extract meaning from them. While he has been working with the body throughout his oeuvre, the current series presents a stronger focus on the figures and studies it in context with its environment. Adding this he said, “Yet, the artist presents the body in parts forcing the audience to activate their own imagination. His rendering of the body is close to realism, but this is limited to the technique, with his content and compositions a bit more modernist, bordering on surrealism. This conflict adds to the enigmatic resonance in his work, making them both fantastical yet grounded.”

While talking about Usman’s creation Director Sanat Gallery, Abid Marchant said that he has recreated the bodies that he’s observed in his surroundings as well as what he’s dreamt about. For him it’s of utmost importance to understand the way things are and why they exist in a dream-like environment. In his current body of work titled “Strangers in The Night”, Usman is fascinated by bodies in a particular space. He has pushed himself to look beyond what the normal eye sees