Why is Sindh failing to control deadly pneumonia? 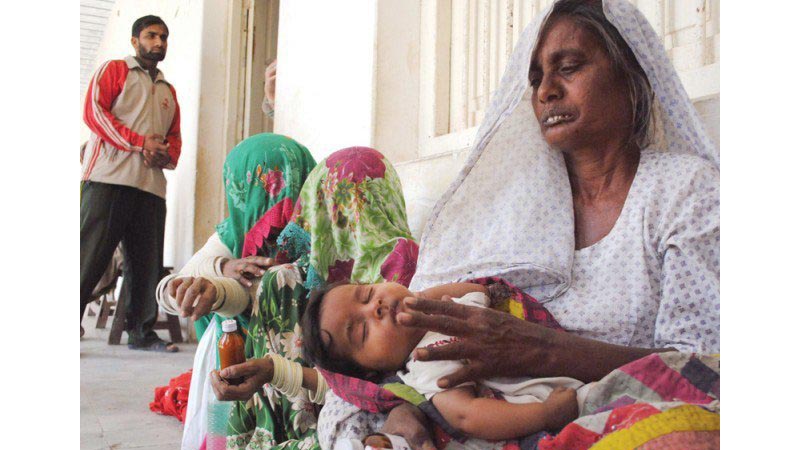 KARACHI: As World Pneumonia Day is being observed across the globe today (November 12), Pakistan’s pneumonia-related woes are not lessening, with 92,000 children under-five years of age falling prey to the disease every year.

Pakistan is ranked among the list of 15 high-burden countries where the estimated deaths of children by pneumonia is alarmingly high.

Pneumonia is an infection of the lungs that can cause mild to severe illness in people of all ages. Common signs of pneumonia include cough, fever, and difficulty breathing.

Pneumonia can be prevented by following good hygiene practices, such as washing hands regularly and disinfecting frequently touched surfaces, taking good care of your medical problems, and quitting smoking.

In October 2012, Pakistan became first South Asian country to include pneumococcal conjugate vaccine in its national immunisation programme. That means Rs 25,000 ($240) per one complete dose of vaccine was made available free of cost for the public at EPI centres countrywide.

However this did not stop country’s pneumonia-related deaths. In Sindh, failing to control pneumonia is linked with low vaccine coverage. The Sindh government claims that it has improved the Expanded Programme of Immunisation (EPI) coverage to 45 percent in the province but an independent survey namely Multiple Indicator Cluster Survey (MICS) 2014 reveals that coverage stands at around 29 percent. Sindh is far behind Punjab and Khyber Pakhtunkhwa where EPI coverage is around 85 percent and above 50 percent, respectively.

“If Sindh’s latest official estimates are to be believed that say province’s EPI coverage has enhanced up to 45 percent, even then it is not satisfying by any standard,” Dr Jamal Raza, president Pakistan Paediatric Association (PPA) Sindh and head of Karachi’s National Institute of Child Health (NICH) told Daily Times. “If you want to eradicate pneumonia, you will have to raise EPI coverage area by 90 percent,” Dr Raza added. Sindh EPI Project Director Dr Agha Muhammad Ashfaq elaborated that improved immunisation coverage could be linked with better district management.

“There are well performing districts like Hyderabad, Sukkur, Larkana and Shikarpur. In Karachi, areas like Shah Faisal Town, Orangi town are better whereas Baldiya, SITE, Landhi, Gaddap are poor performers,” he added. “Good or poor management makes the real difference,” he said.

Although lawmakers in the Sindh Assembly have repeatedly recommended legislation on compulsory immunisation to improve the current state of the coverage, nothing practically has been done so far. Nusrat Sehar Abbasi, a Pakistan Muslim League-Functional member of the Sindh Assembly, said that there was a lack of interest and involvement by both treasure and opposition on what she declared very important routine immunisation. However, frequent change in ministers’ portfolios is also another factor regarding the performance of departments concerned,” Abbasi added.

Khurram Sher Zaman, a Pakistan Tehreek-e-Insaf lawmaker, said that the Sindh government was very heedless whenever the attention was drawn towards health issues. Contact with Sindh Health Minister Dr Sikandar Mandhro could not be established despite repeated attempts. Huma Khawar, a representative of International Vaccine Access Centre (IVAC) at Johns Hopkins University, thinks there is a dire need to raise awareness about pneumonia. “Policymakers, healthcare professionals and the public should promote prevention and treatment and generate action to fight the illness,” she said.

“Mother’s milk is the best food for infants because it prevents several deadly diseases, including pneumonia, diarrhoea and measles. But only 27 percent of women in Sindh exclusively breastfeed their children in the first six months after birth,” Dr Akhter added.