A recipe for disaster

Democracy is built on transparency and accountability. The notion that politician are held accountable by voters during the election is ill conceived and incorrect.

Evolution of state is one of the greatest political science milestones. Although no specific date, year or person is linked to it, this theory and its manifestation of modern day state is one of mankind’s greatest achievements. The state gave the concept of citizen who was distinctly different from subject of king or lord in a kingdom or fiefdom. Citizens were and are all equal before the law. While the subject didn’t enjoy any such privileges. It took great pains of various generations to refine what we know today as state and govt. Neither is complete or can exist without the other. For a country of this age to prosper, both entities have not only to exist in harmony but have to function seamlessly.

Pakistan is a unique country in many regards. There are few acts one can do in Pakistan with impunity. Consider breaking a traffic signal in most parts of the world and one finds himself shoved behind the bars. Not so in Pakistan. Most countries of the world will treat food or medicine adulteration as a crime against the state.

Both Govt and state act glove in hand. Govt makes policies and sets direction and state institutions give life to these rules and procedures. No country can afford a split between Govt and state let alone a rift.  Since there is no example to learn from, one can only learn  the theory to understand the consequences of a rift between the government and state.

Mistrust between political class and a few state institutions is no news to even ordinary Pakistani. Both sides know this and   endeavour to narrow the differences. Since the Panama Affairs sprang up, this abyss was amicably managed. But matters are only worsening each day.

We are watching an acrimonious spate of the Government and State  in full swing. To say it has harmed the country is an understatement. It has rocked the fragile balance of power in Pakistan. Perhaps we are in a transition to a more enlightened Pakistan, but the road is extremely bumpy.

The Panama scandal  brought the legal system of the country against the powerful ruling elite. To refresh our collective memory, SECP, FIA, State bank and NAB shared their inability and absence of jurisdiction. This confession was made in front of parliamentary committee. Imagine for a while that a purported white-collar crime has been committed and there is evidence available to investigate the matter further but there is no institution which has legal jurisdiction to do so. Is that possible in a modern-day  state?

The higher judiciary has to perform a difficult task of interpreting law and constitution. That’s the power the Supreme Court of every country enjoys and exercise. In the absence of laws or legal jurisdictions, the higher judiciary can act on its own to fill the legal void, remaining within the bounds of principles of natural justice. That is what happened in the Panama case as well. The courts acted on a petition when all other state institutions declined to act.

Since his ouster, the ex PM is on an onslaught of judiciary and establishment. He has built up a fairly strong counter narrative about his removal from power. He is the most seasoned politician and statesman in Pakistan and knows what crates a vibe with the masses.

We are now in a situation which is quite ugly. We have a party in government  federation and four provinces (GB and AJK included).  We have functional governments  in all tiers who are sympathetic if not supportive of the ex PM. But the party in government has its leader on the roads crying foul and accusing state institutions of plotting a conspiracy against him. What’s more, he has the full logistical and political support of government. . This situation is only a recipe of disaster in making. The government  is brewing up a storm with its complicity against itself. How will it unfold is any body’s guess.

There are nearly half dozen former Prime Ministers living in Pakistan, are all of them are given the same protocol and security? Do children of former PMs receive state protection the way Maryam Nawaz does?  Is there a different law for wards of other PMs. Punjab House is property of Punjab Province and not family resorts of the Sharif family. It is all blatant violation of state laws and misuse of the public money. PM Abbasi has failed to live up to public trust posed in his office. He has to be loyal to state and to the laws of state and not to a person.

We are watching an acrimonious spate of the Government and State in full swing. To say it has harmed the country is an understatement. It has rocked the fragile balance of power in Pakistan.

PML (N) must realize that the media has created an extremely charged environment. One segment of the media portrays a routine corruption case as a chance to hammer down the ideal of civilian supremacy. They dream of controlling the judiciary as they did in the days of  Saifurrehman. And the other part of media would settle for nothing but the scalp of MNS (Mian Nawaz Sharif). Both are wrong, and the truth is somewhere is the middle of it. PML (N) has used its parliamentary majority to cause judiciary concern. A draft circular has been filed  against justice Khosa to rumours of reducing the age of judges are the tactics of the strategy to bend the Judiciary.

MNS is forcing judiciary and other institutions to either budge to his demands or face his wrath. His party is stirring up a crisis of governance of understandable but unmanageable proportions. Famous columnist Javed Choudry has predicted a very dire but highly probable scenario. He fears courts issuing order to Govt to place MNS and children on ECL and issue red warrants of sons of MNS. Govt will find it extremely difficult to comply to these orders. A repeat of the fate of ex PM Gilani loom  on the horizon. This will only worsen the crisis. 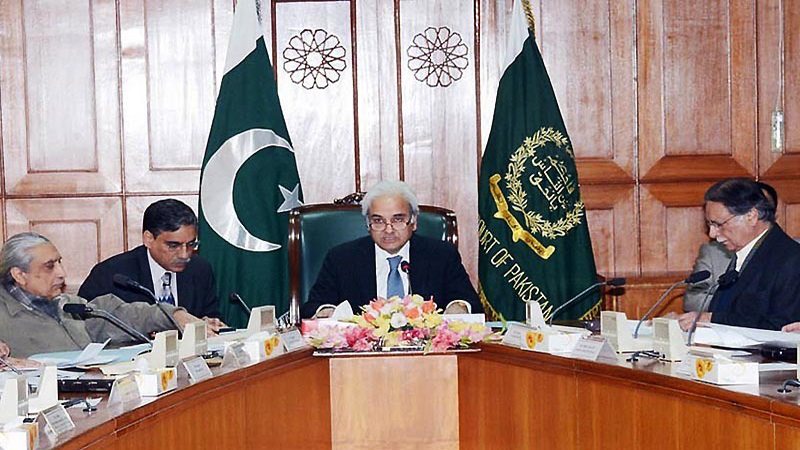 The courts have shown extreme restraint in the face of text book provocation. Extremely callous and shameful speech of senator Hashmi is not an event of some other century. Courts have not proceeded against others for contempt of court and have left the matter after collecting records of their fiery speeches. If at some time the patience of courts runs out, then most hawks of PML (N) would find themselves  in trouble.

Civilian supremacy is a principle, but it takes time to fully establish. Mr Bhutto was a civilian ruler and he ruled with FSF which was loyal to him alone. Can we imagine David Cameron or Mr. Obama running a country like this?  Bill Clinton was impeached for telling lies during enquiry of sexual misconduct. Do we hold our leaders to such high moral standards?

Does civilian supremacy mean defying and attacking the courts in letter and spirit both? We are following Westminster style democracy. French president was arrested on corruption charges. His daughter did not stir an agitation and attacked courts. Nor did French Govt allow Mr. Sirkouzi the luxury of state security and protocol during trial. Indian PM Rajiv Ghandi faced charges of graft in notorious boffors scandal. He did not threaten judiciary with what we are seeing in Pakistan.

Democracy is built on transparency and accountability. The notion that accountability of politician is done by voters during the election is ill conceived and incorrect.

Election victory is not a license to corruption. Holding a public office is a sacred trust and breach of trust is punishable. Accountability of judiciary and armed forces by parliament is a matter of legislation. The political class can’t take refuge behind a narrative that parliament has no authority over these two. If parliament can amend laws to facilitate the election of MNS as a party head despite disqualification, then there is no excuse with them.

A small miscalculation in such a charged atmosphere may lead to a catastrophe. With USA turning against us and a mounting debt to service, internal discord is the last thing the nation wants. Our leaders should not disappoint us.

The writer is security analyst based in Rawalpindi