The plateau effect has finally kicked in, the number of violence related casualties have started looking similar from one quarter to another

During the third quarter of this year, 499 persons lost their lives and 388 were wounded in violence and counter-violence incidents in the country. Balochistan, Punjab, and Sindh, suffered the majority of fatalities while FATA and KP were the least affected by violence.

It is also worth noting that the plateau effect has finally kicked in, with the number of violence related casualties looking similar from one quarter to another. There were 499 deaths in Q3, compared to 494 in Q2, a minor difference.

The fatalities from counter-violence operations by the security agencies increased by two-folds in Q3 compared to Q2. The number of persons gunned increased by over 32 percent, nearly half of which were victims of robberies. In last three months, 54 persons died in robberies, which is nearly the number of the total number of robbery-related deaths from the entire year of 2016. 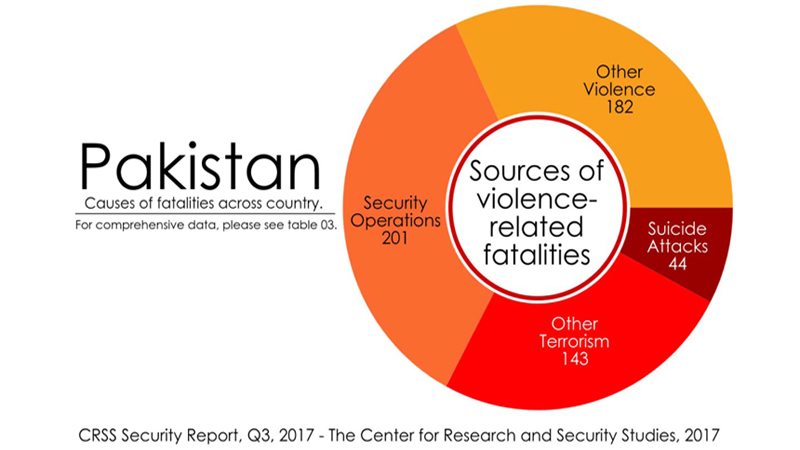 IEDs and landmines caused 39 fatalities in Q3, compared to 3 in Q2. However, suicide attacks and bomb explosions left 58 persons dead this quarter compared to 105 in the previous quarter. Nearly twice as many dead bodies were found this quarter when compared to last quarter. In attempts to defuse bombs two policemen and two civilians also lost their lives.

The loss of civilian life to violence dropped to 39 percent (193) from 52percent (293) in last quarter. Security and government personnel also witnessed a marginal drop in the percentage of total fatalities (21 percent to 17 percent) but the overall number of their fatalities was higher than the previous quarter (58 in Q2, vs. 83 in Q3). During Q1 and Q2, 65 security persons succumbed to attacks. In Q3 this number is at 83.

Despite a visible decline in acts of terrorism, continued military operations, and shifting loyalties within their cadres, militant groups adopted new tactics to sustain their presence and maintain their spatial and geographical legitimacy. Infighting among terrorist outfits, emergence of new splinter groups and the drive for recruitment and retention seemed to drive the bulk of the militant agenda. They appear to have reverted to primarily targeting security personnel. The Tehreek-e-Taliban Pakistan (TTP) launched a female-centric publication, “Sunnat-i-Khaula”, following Daish’s footsteps in attempting to recruit educated females. 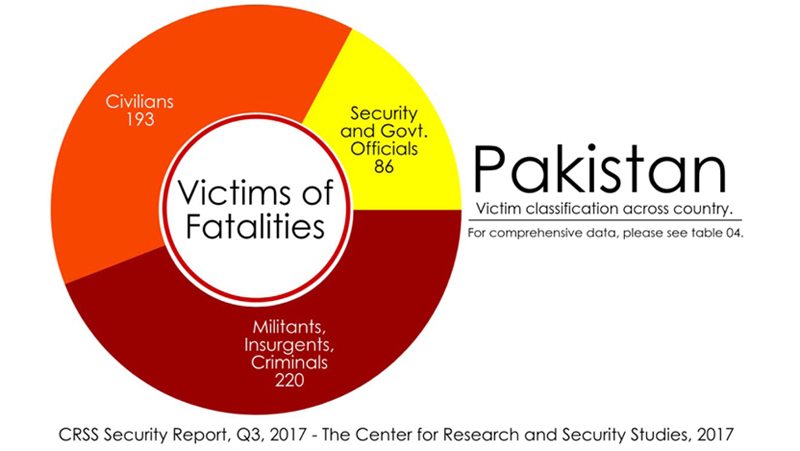 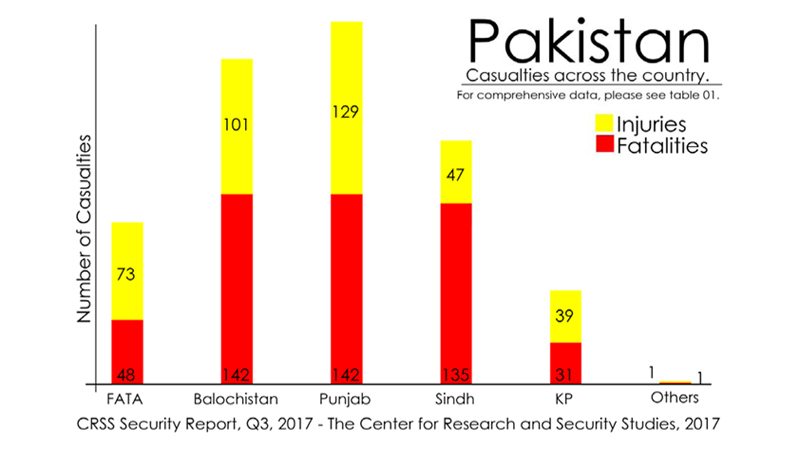 The significant decline in the number of fatalities from violence in KP and FATA during Q3 shows overall progress, but the numbers favor the militants. The transportation of explosives and confiscation of armaments from FATA and other parts of the country show continued militant tenacity. After a string of successful military operations in the FATA regions, the provinces of Balochistan and Sindh appear to have become the main hubs for militant activity, with a pronounced focus on security forces.

The writer serves as a Senior Research Fellow at the Center for Research and Security Studies, Islamabad, is a freelance journalist, and holds a bachelor and master degree in strategic communications from Ithaca College, NY.