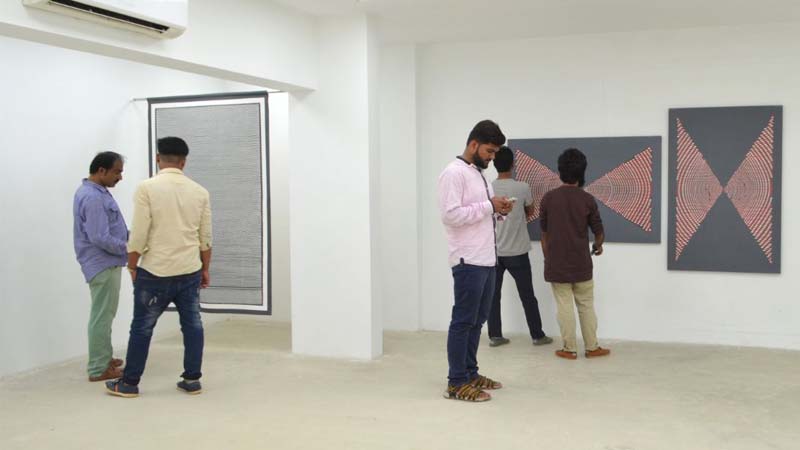 KARACHI: Ghulam Hussain, a contemporary and visual artist from Hyderabad, exhibited his recent collection titled “Mind = Blown” at the Sanat Gallery in Karachi.

Ghulam Hussain hails from a place home to one of the world’s oldest civilizations, Indus Valley Civilization. He trained in miniature painting from National College of Arts Lahore.

While talking to Daily Times, Ghulam Hussain said he preferred a humanistic approach to what makes a person happy, enriched and fulfilled.

“This prehistoric, bold style imagery collaborates with obscure hand woven wasli and my school note books,” he said while standing besides his works of art.

“My style draws from the ancestral profession of my family, as we weaved chattais (floor mats) made by date trees, something not made anywhere but in Sindh,” revealed Husain.

He explained the impulse to find visual ‘purity’ was far from the only appeal in abstraction. Abstraction refers to things in the world, like the textiles and their pattern, that pique Hussain’s interests. Adding this, he said sometimes artists enjoy abstraction as a symbol of modernity. “The aim of the piece was to look daringly disruptive and yet perplexing and sometimes the impetus was to be exuberant; setting up colours, lines and shapes in an enigmatic fashion arranged tactically in the form of a riddle that the viewer must decode,” he added

Sanat Gallery Director Abid Merchant told Daily Times that Ghulam’s work was distinct due to its technique and simplicity, opening up a range of possibilities both for the artist and its viewers. “His recent series of work shows his continued interest in basic shapes, vertical and horizontal lines,” he added

“Hussain is challenging the concept of high art by integrating forms of low craft, such as weaving and brick building, with the miniature style of painting,” he said.

One of the visitors was of the view that in Hussain’s work, it was perception that stood out as a key element. “The visual arts heavily rely upon a sense of perception-in both the viewer’s observation of the piece and the personal insights of the artist who animates it,” the visitor said.

“Every artist has their own unique perspective, shaped by their personal experiences and values. However, these pre-existing viewpoints shape how an artist or individual reacts to an event, interacts with other people on a social level, and perceives the world in its entirety around them,” he added.

Ramya Hassan, an artist, shared her views that Hussain-in his artistic need to explore his traditional roots intertwined with nostalgic memories-applies conscious strokes using a combination of graphite and woven canvas. His work in its abstraction evokes the passage of time and memories, both personal and collective. She said, “Sometimes abstract art is about transcendence-arriving beyond the tangible and mundane elements that you see, taste and touch and in its stead attaining the symphony for the eyes”.

A teacher from Indus Valley School of Art and Architecture said that Hussain’s body of work was conditioned by a context from which observation and evaluation were made. “Instead of general models of understanding, such as class, race, culture, it was conditioned by what the artist referred to as low art and high art,” she said. “He has never sought to show reality caught at one precise moment, but, on the contrary, to reveal universal change, of which temporality and infinitude are the constituent values,” she added.

Ghulam’s work has been exhibited both nationally and internationally. His work is in the collection of Devi Art Foundation India and has been shown at the 5th Beijing International Art Biennale in National Art Museum China.

Ghulam had also been awarded the Rockefeller Brothers Artist Residency.

The exhibition will continue until November 14, from 5-8 pm, at the Sanat Gallery.