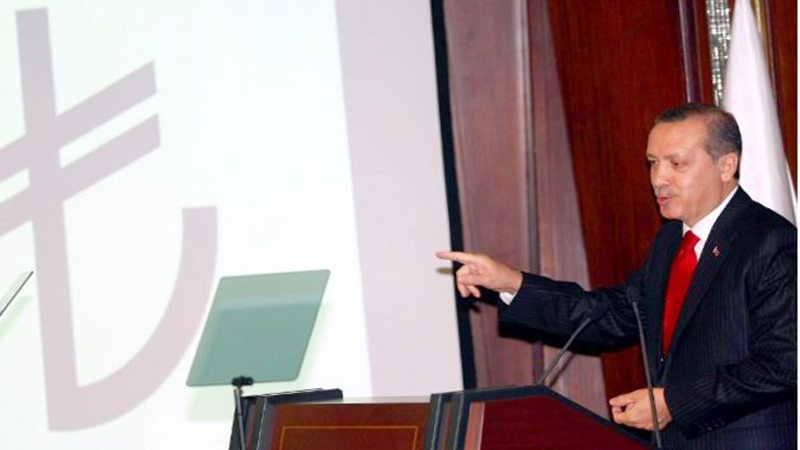 Turkey once again is the sick man of Europe, as its currency suffered the worst daily decline since the July 2016 coup attempt after President Recep Tayyip Erdogan was implicated in a US federal money-laundering case.

The Turkish lira plunged to an all-time low of 3.882 to the US dollar from yesterday’s close of 3.797 after US prosecutors revealed that a Turkish trader accused of laundering money for Iran had sought help from the Turkish president.

The Turkish-Iranian gold trader, Reza Zarrab, allegedly stated in a 2013 wiretapped phone conversation that he was laundering money at Erdogan’s direct instruction. Zarrab told a confederate, “Even if we do two billion, that is important. Do you understand? It is important for me, in the eye of the prime minister [Erdogan], since I will go straight to him.” Zarrab also donated money to charities run by Erdogan’s wife and other family members.

The US government hasn’t charged Erdogan with wrongdoing, but the new court documents are a major embarrassment to the Turkish leader. US-Turkish relations are already strained after Turkish authorities arrested a Turkish citizen employed by the US Embassy in Ankara on charges of coup-plotting. In response to the arrest, the US Embassy stopped issuing entry visas to Turkish citizens and the Turkish government responded with a retaliatory visa ban.

Political tension with the United States hit the Turkish currency at a moment of vulnerability. The Erdogan government has fostered an extremely fast pace of credit expansion, financing an import boom at the cost of a sharp rise in the country’s payments deficit.

Currency devaluation scares away the hot money investors, and threatens to push the country into a spiral of devaluation and inflation. Turkish companies owe about US$300 billion in foreign currency loans, and devaluation raises the cost of debt services for companies that depend on domestic revenues.

Just how fragile Turkey’s finances are is illustrated in the following charts. Total domestic loan growth is now increasing at a 25% annual rate, the highest rate since 2013.

Because so much of Turkey’s consumption is imported, the country’s inflation rate (shown as the year-on-year change in the Consumer Price Index) has risen as the currency devalues. Consumer price inflation now stands at 12% per year, and producer price inflation is rising at an 18% annual rate.

As inflation jumps, so does the government’s cost of borrowing money. 10-year Turkish government bonds denominated in local currency are yielding nearly 12%.

Prime-rated Turkish companies, meanwhile, are paying 15% a year for bank loans, according to the country’s central bank, while consumers are paying 17%.

There are some indications that Turkey’s central bank is preparing for a financial crisis.

Bloomberg News reported today that Turkey has added the equivalent of $5 billion in gold to its foreign exchange reserves, possibly as an emergency reserve in case of a breakdown of relations between Turkey and its Western trading partners. “While the central bank cited a good old-fashioned diversification policy, some analysts speculated that the country could be shoring up reserves amid rising tensions between Turkey and its traditional Western allies,” Bloomberg wrote.