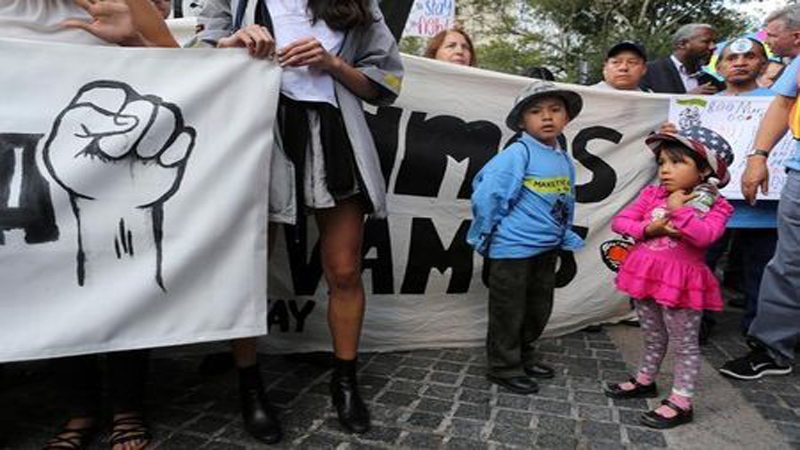 NEW YORK: Many of the immigration initiatives launched by the Trump administration in recent weeks target one kind of migrant: children. The measures are aimed at expelling young people already in the United States illegally and preventing new ones from crossing into the country.

Some of the policy shifts have generated headlines, including Trump’s decision in September to end the Deferred Action for Childhood Arrivals program, or DACA. That measure, put in place by former President Barack Obama in 2012, allowed nearly 800,000 young people brought to the United States illegally as children the ability to live, work and study in the country without fear of deportation. Other proposals and actions have received far less attention. The Trump administration has recently intensified scrutiny of abused and neglected foreign minors applying to stay in the United States. It is seeking to restrict who qualifies for special protections granted to children crossing the border alone. And it is stepping up prosecutions of adults who paid smugglers to bring unaccompanied kids to the United States.

The White House also announced this fall it will end a program allowing Central American minors to apply for US asylum while still living abroad. At the same time, the administration is exploring ways to scrap legal protections that limit how long and under what conditions children can be held in immigration detention centers.

In response to questions about the changes in immigration policy focused on children, the White House said that relevant agencies were reviewing ways to help “law enforcement professionals to do their jobs and keep the country safe.”

Trump came to office promising to crack down on immigration. That message grew stronger this week in the wake of a terrorist attack in New York by a 29-year-old immigrant awarded a green card through a visa lottery program the president has now vowed to end.

Some of his messaging on child immigrants also reflects security concerns. In a speech in Long Island in July, Trump called out “alien minors” as responsible for gang-related killings in the United States.

“These are animals,” he said of members of the notorious Central American gang MS-13. In addition, the administration says it wants to prevent children from undertaking perilous journeys to the United States and eliminate fraud from programs for young immigrants. “The President wants to stop the incentives for vulnerable children to come here illegally,” Attorney General Jeff Sessions said in a speech in Texas in October. In another speech last month, he blamed “dirty immigration lawyers” for encouraging clients to game the process. Some immigration advocates see the president’s focus on young border crossers differently. Children are perceived sympathetically by the public and have more legal protections than other immigrants, giving authorities less flexibility to deport them, they say. It is “in the administration’s interest to paint unaccompanied children as gang bangers and not as asylum seekers fleeing violence and abuse,” said American Civil Liberties Union attorney Michael Tan. “The administration wants the public to perceive these children as monsters and not people deserving of refuge.”

President Trump is not the first president to try to crack down on minors crossing the border illegally. Obama prioritized the removal of young immigrants after the number of unaccompanied minors apprehended at the US-Mexico border peaked at more than 68,000 in 2014, most of them from violence-torn Central America.