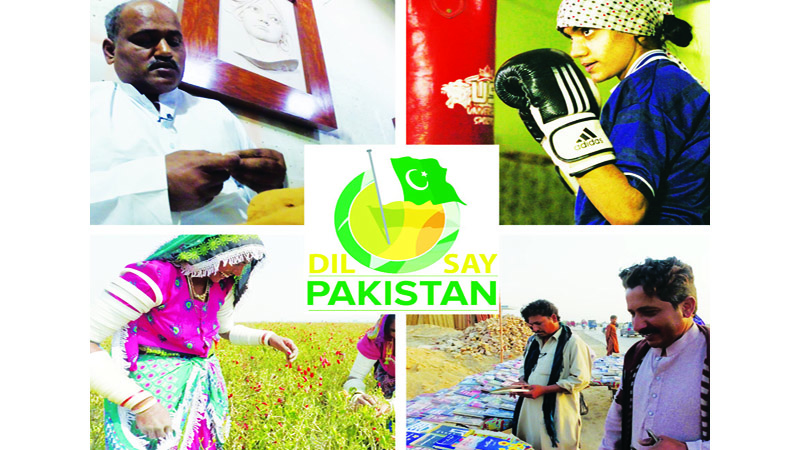 ISLAMABAD: Though Pakistan has become synonymous with terrorism, yet there are vibrant stories of people with immense potential and resilience and places carrying ageless traditions of harmony and peaceful coexistence scattered around the country waiting to be explored.

On most local and international media we hear about minorities being deprived of their rights and getting slaughtered by the hands of extremists; attacks on temples, churches, Imambargahs; or the forced conversions of Hindus and Christians in the country. But following the rich traditional history of Pakistan, one is touched and pleasantly surprised to know that there are places and people in this very country daring to break age old taboos and challenges, living in the true spirit of peaceful synchronicity and mutual harmony while following different religions through ages.

By unfolding the vibrant stories of interfaith harmony, revealing personal stories of inspiring Pakistanis who are contributing to society in whatever way and capacity they can, without any discrimination of race, religion or cast, a beautiful and inspiring Travelogue ‘Dil Say Pakistan’ comes to touch upon the many issues Pakistan faces and send out messages of inclusion and pro-activism picturing peace and harmony to all Pakistanis and the world at large.

Compiled by ‘Black Box Sounds’, Dil Say Pakistan is a Travelogue launched as a Transmedia campaign unveiling such amazing, inspiring and positive stories from Pakistan to the people of Pakistan and the world that fill their hearts with pride and oneness, and Pakistanis from different regions, sects and ethnic backgrounds stand proud and united under the banner of Pakistan.

Mainstream media are tools that need to be utilised for promoting productivity, motivation, peace and tolerance. There are countless stories from across Pakistan that can become an inspiration to the youth and guide them towards productive activities and outlets. Revealing such stories to the youth specially would lead them to thinking, “If they can do it, why can’t we?”

This Travelogue, features personal stories of many inspiring Pakistanis, subtly countering violence and extremism by revealing how, despite the many obstacles they encountered, there are people across Pakistan who have contributed greatly to the cause of humanity, the betterment of their communities, and the greater good of their country.

By revealing stories of productivity, positivity, harmony and peace the Travelogue shows the reality that this is a country full of extreme potential and goodness, and invites people to become part of the peace process. These stories reveal the ‘brighter’ side of Pakistan that has been greyed and diminished with increased violence.

The Travelogue takes us through the town of Mithi in Tharparkar, a perfect example of peaceful coexistence. People are peace loving and there is absolutely no hatred or fight. Whether it’s Eid, Diwali or Holi, all residents of Mithi celebrate it together. Residents of Mithi believe that they aren’t Hindus or Muslims but simply humans first. In times when we would witness religious extremism and conflict between various religious communities, you’d find it surprising that people of Mithi live with so much love that crime level of the town is almost zero. Mithi gives interfaith harmony a new meaning. Religious intolerance elsewhere has barely made a dent in Hindu-Muslim brotherhood over here. They live, eat, and work together, because according to them, it is in their culture.

Mithi is one of the few towns in Pakistan where Muslims do not form the majority. In this quiet portion of a sprawling desert, both Hindus and Muslims have lived together like brothers since the creation of Pakistan.

A resident of Mithi commenting about the pluralistic culture says, “After visiting Mithi you realise that it is very different from other places of Pakistan and it’s like a heaven on earth. In our village, Hindus and Muslims have been living together for decades and there has not been a single day, when I have seen a religious conflict. No loud speaker is used for Azaan at the time when Hindus are worshiping in their temple, and no bells are rung when it is time for namaz. Nobody eats in public when it is Ramazan and Holi is played by every member of the village.”

The travelogue also takes us to the Shrine Odero Lal in Matiari village, which is known as more than a temple: it is centuries old sanctuary for Hindus and Muslims. At the time of the destruction of the Babri Masjid in the early 1990s, it was the only Hindu temple in the subcontinent to be guarded by Muslim devotees.

The temple adjoining an ancient mosque where Hindus and Muslims worship together, respect each other’s rituals and observe silence during each other’s prayer times, Odero Lal is indeed a unique religious centre of not only Sindh, Pakistan but perhaps in whole world. His teachings attracted an equal number of Hindus and Muslims.

From places like Mithi and Oderolal, the Travelogue sketches silent stories of resilience, from the passion of a 19 year old girl Razia Bano from Lyari, Karachi, who breaks all societal taboos and stereotypes by venturing into men dominated ring of Boxing. Wearing boxing gloves in place of bangles, Razia emerges as a boxer, trained by Younus Qambrani at Pak Shaheen Boxing Club in Karachi.

The travelogue also introduces the magnificent works of artist Fakhiro. The powerful work of this Hindu artist in vibrant and skilful creativity brings life to sculpture. Fakhiro is a proud Pakistani and believes that art is not bounded by any religious parameters.

With many other success stories of people and places, the travelogue shows that though all religions contradict each other, but that does not mean their followers should make their own colonies on that base alone. People can and do coexist. It is only the bigots who cannot, and they can be found in every religious group. We must not let them take over the beautiful communities of Pakistan. Respecting each other’s’ beliefs is the solution of a lot of Pakistan’s current predicaments. Religions differ, humans don’t.