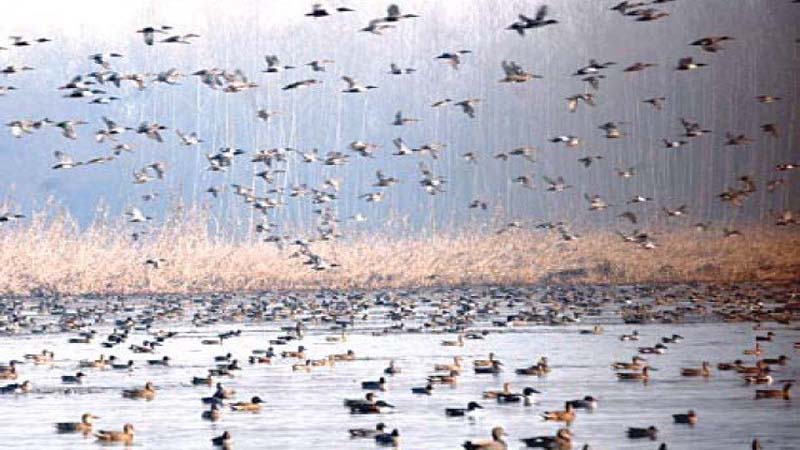 LARKANA: On the onset of winter, thousands of different species of migratory birds from Russia, Uzbekistan and Siberia have started entering the lakes areas of Kambar-Shahdadkot District.

These birds migrate after the freezing of water areas in their respective countries and as snowfall begin. These birds cannot survive under such harsh weather conditions.

Sindh Wildlife Department has made arrangements this year so that nobody could be able to hunt these guests who travel from thousands of kilometers away and reach here to stay alive and breed freely.
These birds start arriving at Langh, Drigh, Saroh and Hamal lakes before November every year and stay there up to April during which they not only breed and take care of their chicks’ up-bringing but maintain habitat after which they fly back to their respective areas.

When it is sunny, they remain confined to lakes out of fear of being hunted and when darkness descends, they reach different paddy crop harvested fields to fill their stomachs with leftover grains.

A hunter said that they used to earn millions of rupees during the season by hunting these migratory birds but because of the government’s measures to protect them, they were unable to do anything.
He further said that equipped with guns and nets, they used to catch these birds and sell them on main highways for as much as Rs 3000 for a single bird.

Kambar-Shahdadkot District In-charge Game Inspector Sher Muhammad Mugheri said that birds have started arriving at lakes and arrangements for their protection from unlawful hunting have been made. He said wildlife department has arranged rice, paddy and other food items for birds so that birds do not face starvation, adding that abundant food has been made available for them.

He said that in-charge of various lakes have also been supplied food items for the birds.

Langh Lake In-charge Sikander Ali Khichi said that complete ban has been imposed on hunting and no hunter was being allowed up to three square kilometers near the lake. He also said that bringing a gun or a net in and around lakes is banned as well with its implementation strict in nature.

He further said that round the clock vigilance was in process and several hunters were also been arrested who tried to hunt through nets during the hours of darkness. The officials also recovered birds from their possession which were freed on the spot.

Bird lovers Khamiso Khan, Zahid Hussain, Jeeal, Ghulam Ali, Fayyaz, Saddam and others said that a complete ban should be ensured and implemented on hunting of these migratory birds to protect them and all those involved in their hunting should be punished.

Speaking about the lack of adequate arrangements for tourists and visitors around the lakes, they said that proper water, electricity, boating facilities and telescopes should be provided to facilitate those who visit the lakes in this particular season.