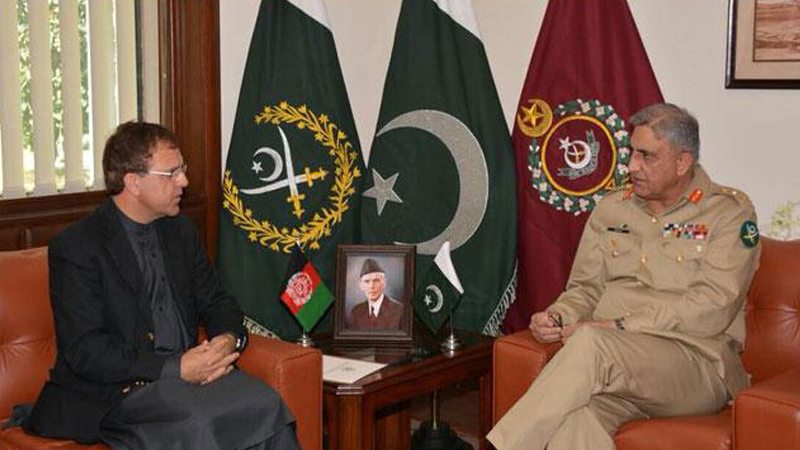 “Both the countries [Afghanistan and Pakistan] have suffered a lot from terrorism and such attacks shall not deter our resolve and commitments for peace in the region,” Gen Qamar told Afghan Ambassador to Pakistan Omar Zakhilwal at a meeting at the GHQ.

According to the Inter-Services Public Relations (ISPR), the army chief strongly condemned the recent wave of terrorist attacks in Afghanistan, including the one on an Afghan National Army base in Kandahar.

On Thursday, over 50 Afghan soldiers were killed and nine wounded in a brazen assault on the military base in Kandahar.

The army chief also expressed his sympathies with the bereaved Afghan families.

General Bajwa later spoke to Afghan President Ashraf Ghani and had a discussion in follow-up to their meeting in Kabul on October 1, Daily Times has learnt.

Sources said that the telephonic talk mainly focused on progress on the understanding reached during their meeting in Kabul.

“Peace and stability in Afghanistan is critical for regional trade and connectivity,” Janjua told the envoy.

Cooperative relationship between the two neighbours will augment trade activity in the area and offer greater connectivity to regional countries, he added.

The two expressed their satisfaction over the recent improvement in bilateral relations in the backdrop of Gen Qamar’s visit to Kabul.

The Afghan envoy reiterated the desire to turn Pak-Afghan relations in the best interest of peace, stability, and development.

The two sides agreed to keep the positive momentum and to overcome all problems through better understanding and regular contacts at all levels.

Also on Friday, Afghan defence ministry spokesman General Dawlat Waziri claimed that “most of those who are kidnapped in Afghanistan, foreigners in particular, are held as hostages in the neighbouring country,” according to Tolo TV.

General Bajwa’s telephonic talk with the Afghan president comes at a time when Taliban insurgents have stepped up attacks and killed nearly 100 people, mostly security personnel, over the past four days in Kandahar, Paktiya and Ghazni provinces.

The Quadrilateral Coordination Group (GCG) comprising Afghanistan, Pakistan, China and the US also met in Muscat, Oman, this week after nearly one-and-a-half year. Last QCG meeting was held in Islamabad in May 2016.

Taliban in a commentary this week rejected the QCG as a ‘drama’, indicating the insurgents are not willing to join the peace negotiations.

Member countries did not share any outcome of the QCG meeting held on Monday.

“These kind of melodramas are labelled by the foreign occupiers and their internal stooges as peace processes … however there is no concept of peace in these meetings because inside the country, innocent civilian people are massacred ruthlessly without any discrimination,” Taliban said on Oct 17. Pakistani officials, dealing with Afghanistan, last week conveyed to the Taliban to prepare a team for the political negotiations. Taliban are adamant not to hold talks with the Kabul administration. However, they want talks with the US to discuss a timeframe for the withdrawal of their forces from Afghanistan.