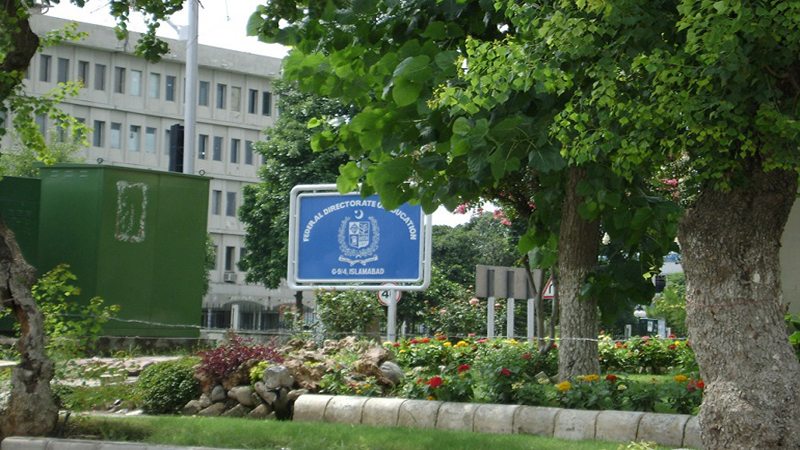 ISLAMABAD: Around 100 schools and colleges in the Federal Directorate of Education (FDE) are functioning without permanent principals.

The objectives of the Prime Minster’s Education Reforms Programme (PMERP) remain unfulfilled due to this issue.

The FDE oversees 423 educational institutions across the capital and the adjoining rural areas.

According to details available with Daily Times, vice principals hold temporary charge in 12 percent of these schools and colleges. The rest are functioning without any administrative head.

The documents reveal that currently, a total 91 male BPS-18 principals are present in 155 FDE model schools and colleges. In this way, 64 institutions are functioning without heads.

There are a total of 100 educational institutions, both female and male, located in rural areas. A total of 59 percent of them have no principals/heads. According to official documents, the Capital Administration and Development Division (CADD) and the FDE have filled most vacant positions in schools and colleges located in urban areas. However, they have done nothing to fill vacant posts in rural areas.

“Most of the officials are not willing to serve in rural areas. They prefer to do serve in urban areas. They manage to get posted in their desired urban institutions. The rural institutions face utter neglect,” said a senior official.

“There is a clear division between the number of vacant principals’ posts in rural and urban areas. Rural institutions face discrimination,” he said.

According to officials, junior teachers are serving against vacant positions.

The FDE has divided the educational institutions into six administrative sectors. Area Education Officers (AEOs) are appointed usually from the available 52 male principals. The appointment of teachers against the AEOs slots is violation of Service Recruitment Rules, 1973.

While criticising PMERP, a senior official in the FDE said that educational conditions at institutions where there was no principal or vice principal could never be improved.

The FDE is facing an acute shortage of teachers of all other cadres as well. Interestingly, around 2,250 different cadres’ teachers are working in FDE institutions on daily wages.

“Despite their need in the FDE, these teachers are making efforts for their regularisation. Their salaries were stopped by the government four months ago. The various forums have given their decision in favour of these teachers. However, the authorities have not done anything to help them.

FDE DG Hasnat Qureshi admitted that there was an acute shortage of teachers in the FDE. He claimed that the directorate had forwarded a request to the Establishment Division through CADD for obtaining permission for the appointment of 166 new teachers of various ranks on contract basis.

He, however, claimed that there was no deficiency of principals and vice principals in any FDE institutions.