Options before the country are ‘very limited’ 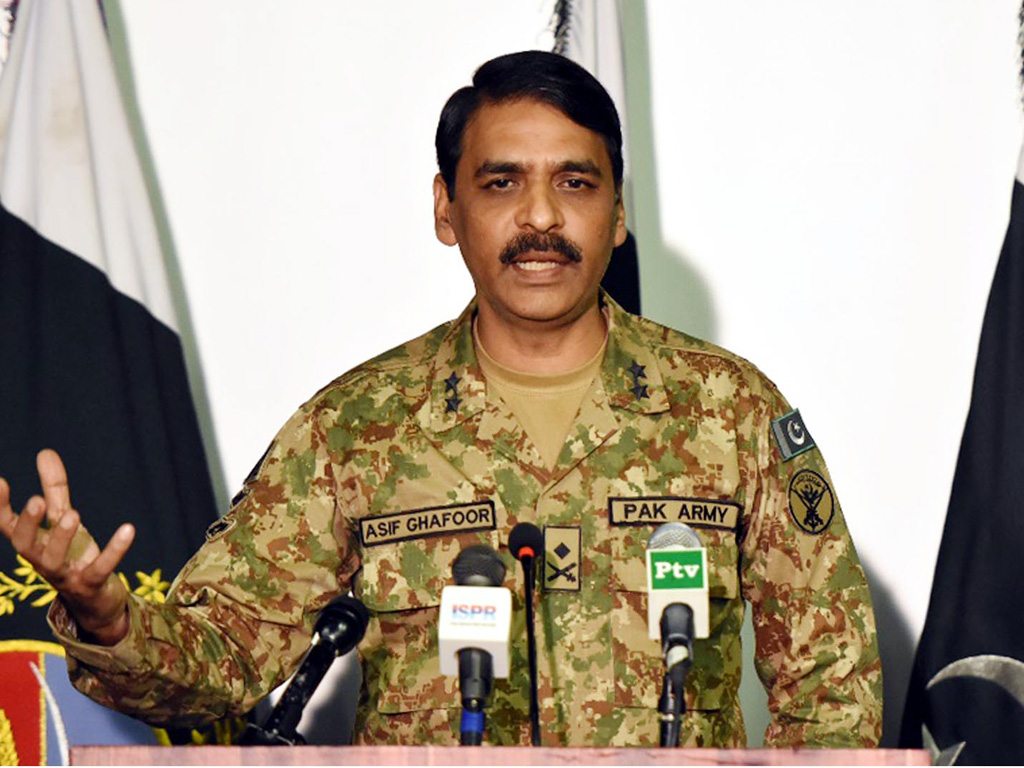 With back to back press conferences by the army spokesman and almost offensive and very aggressive matching responses by the ministers, a situation of confrontation has already been created.

Though the GHQ is trying to put some cold water on the smoke gushing out like vapours coming out of a pressure cooker, no one can, or is, denying the underlying tensions.

The latest briefing by Major-General Asif Ghafoor of the ISPR, meant basically to highlight the rescue operation of the Canadian family, was the third public statement by the army within a week on issues that are not being much appreciated by the politicians.

The army chief first addressed the Karachi seminar. DG ISPR then went on TV to explain the position and later on Saturday he addressed a full-fledged news conference.

The political response came from Prime Minister Shahid Khaqan Abbasi himself, his interior-cum-finance-cum-trouble shooting minister Ahsan Iqbal who directly attacked the army and many others.

What the army is saying, and it is no longer a closed-door discussion, that the affairs of the country, especially the economy, are not being run as they should be and the government must do something about it quickly before things get totally out of hand.

Gen Ghafoor talked in terms of the glass half full and half empty, but Ahsan Iqbal admonished him for even touching the subject. In almost defensive and cool words, not getting provoked, the army spokesman expressed disappointment, rejected the criticism and asked the politicians to get their house in order.

That the economy is sinking and faces serious, almost fatal, challenges in the coming months was highlighted at the Karachi seminar. That an issue of this magnitude, whoever responsible is now irrelevant, could end up getting politicized and a subject of crossfire shows the depth of the fault lines.

Why there is little confidence in the deep establishment about the political setup is evident and understandable.

The change after Nawaz Sharif was removed has not actually been a change but start of a shouting and physical slinging match between four players – the ousted Sharif family, its supporters in and out of government, the judges of the Supreme Court and below and by implication and conjecture the army.

Two of these four players have been super active and on the offensive, unable to stop the legal juggernaut and prevent the consequences. They are angry that no one showed interest in any NRO or bailing them out.

In the process, the government has abandoned its obligation and legal duties of upholding the rule of law, protecting national institutions and even serving the cause of democracy and following its universally known principles and traditions.

The other two have been playing it cool. The judiciary has kept itself above the fray with caution while the army has taken a strictly legal position of staying within the ambit of the constitution and the rule of law.

Gen Ghafoor repeatedly stressed categorically that there was no chance of a martial law, no prospect of any technocrat government or any direct intervention by the army.

But he said something very significant as well. When asked where the danger to democracy was coming from, he said it was not from the army but from those who may not be following the established norms and principles of a democratic regime.

What this means is fairly obvious. He was saying in so many words that democrats, or those who profess to be democrats, have to protect the system themselves, which he implied they were probably not.

This could be interpreted as an indictment, a charge, by some even putting the blame, of the possible or feared failure of the democratic system on politicians. If democratic norms were followed, Abbasi should not have still been running the government by a closely-knit few men loyal to the ousted PM, repeatedly saying publicly that Nawaz Sharif was still his PM and he would get guidance from him.

He should not have allowed an indicted finance minister to continue clinging to his office knowing that he was unable to perform his functions. That this was a fact was implicitly admitted when Ishaq Dar was not allowed to represented Pakistan in Washington meetings.

This is probably what the army is saying by asserting that the threat to democracy is coming from those who are not practicing it.

Why the army had to intervene on the economy, in an indirect way through the Karachi seminar, is because the issue is being considered critical, not just to the economy but to the security of the country as well.

In such a scenario, what are the options for the four players in this slinging match?

The first party is aggrieved and disgraced and they can try whatever they like to, remaining within the framework of rule of law and not losing their mind.

The second group, Nawaz supporters and government, have to make the most critical decision. The government has to perform as a government, executing the law where needed, not to protect the accused but to let the system work.

Police officers getting slapped by senior officials in front of a court with ministers backing them up is not a sight which promotes democracy.

The judges of the lower and the higher courts have to be allowed to do their job, in the timeframe that is mandated and judicious and if they need help of other executive authorities, they should not shy away from asking for help.

If law enforcement authorities controlled by democrats fail to perform or are not allowed to act, someone has to do the job.

The army, as its spokesman has been saying, keeps talking to the government in closed-door meetings and now even publicly about the immediate challenges, government must step up and tell the nation what is being done.

Ishaq Dar is no more effective so he can no longer spin the data or fudge the figures. The real facts have to be told and then a policy designed to meet the challenges. This is what the army wants but the job has to be done by the democratic government. The only other solution is that the PM throws in the towel, declares that he can no longer handle the situation, calls for early polls and steps aside for an interim setup. It would be a democratic response, which the world will also understand and could even give us some time on the economic and financial front.

But that can only be done if politics of personal interests is not allowed to step over the interests of the country. The choices before the country are thus very limited.