Robert Rauschenberg was one of the most influential artists.

Born in a small town in Texas, he moved to New York City, which played a critical role in his practice and evolution as an artist. He was, what is in today’s jargon called a visual artist. Combines and collaboration was at the heart of Robert Rauschenberg’s practice. The Museum of Modern Art in New York (MOMA) in partnership with Tate Modern, London has put up a retrospective of his six decades of work titled Robert Rauschenberg – Among Friends. It will continue until September 17 and has on display some of the hallmark Rauschenberg works.

The Retrospective charts how Rauschenberg consistently experimented and was able to re-invent his work.

He started working at the time when Abstract Expressionism – a result of Post World War II look at life by painters – was the vogue and all the influential painters in the US or of New York School, Jackson Pollack, Willem de Kooning, Mark Rothko and others, were following it. He defied the traditional painting ingredients of paint and canvas and tried to look beyond these parameters to produce his work. New York City’s environment and street garbage was his material hunting ground and inspiration. Old newspapers, tires, bed sheets, clothes, vests, signboards and unimaginable pieces of junk found way in his art. All this experimentation could have led to a pitfall but Rauschenberg was able to break newer grounds with his work and ideas. He produced paintings, sculpture, drawing, prints, photography, sound works, and performances.

The Retrospective starts with prints Rauschenberg did with his wife Susan Weil in 1950 titled Double Rauschenberg. On light sensitive paper used for printing engineering drawings Susan put the light while Rauschenberg was lying on it. This technique was repeated and a human figure emerged with periphery of sheet in blue. It was an innovation back then.

Rauschenberg also had phases of using different colours but mostly white, black, red and blue. “White painting” comprising of seven panels was made of house paint with rollers. It was made more than once. His friend and artist Cy Tombly worked on it and later Rauschenberg’s assistants worked on other versions but what he insisted the same “white painting.” For his exhibition in Sweden, Rauschenberg sent instructions to paint one in absentia.

All this experimentation could have led to a pitfall but Rauschenberg was able to break newer grounds with his work and ideas. He produced paintings, sculpture, drawing, prints, photography, sound works and performances

On this road of experimentation, Rauschenberg extensively collaborated with fellow artists, writers, musicians, dancers and even scientists. He even found his wife and artist Susan Weil while living in Paris and his later relationships in life were also with some of the fellow artists with whom he collaborated on projects or even influenced their own works. Artists Jasper Johns, Cy Twombly and composer John Cage were among his collaborators.

The Retrospective shows how an artist organically grows. There are different phases of Rauschenberg’s works. In some he seems to go par excellence, like the chariot or collage of prints and Hiccups an interactive zipper sheets.

And at times switching to newer mediums he seems to struggle to define his niche like simple silk prints.

Another important early work Automobile Tire Print was made by asking a friend to drive his car across typewriter papers. These works and experiments have to be considered keeping in view pace of life in the early second half of 20th century. His experiments with red colour brought other objects in his red paintings and he started calling them “combines” to avoid having them bracketed as painting or sculptures or provide answers to his critics. His famous Bed was created when Rauschenberg could not afford to buy canvas and he worked on a quilt given to him by a friend artist. The Bed has paint and pencil strokes and was done with help of artist Cy whose studio was next to Rauschenberg’s in New York.

Mud Muse is a feat with engineers. A room sized mud pond filled with slimy liquid used in oil or gas drilling creates splatters and noises because of a sound activated tube at the base of pond. It gives a primordial and futuristic look at the same time.

Rauschenberg’s famous combines Canyon has a taxidermied eagle, which was found by a friend among junk and Monogram has a goat stuck in a tire. In the last phase of his life Rauschenberg moved to a small island Captive near Florida. The nature of his work his material changed because the island did not have range of junk that New York had.

Rauschenberg’s work is defined in his own words, “Painting relates to both art and life. Neither can be made,” and sometimes even for Rauschenberg that gap became too wide. 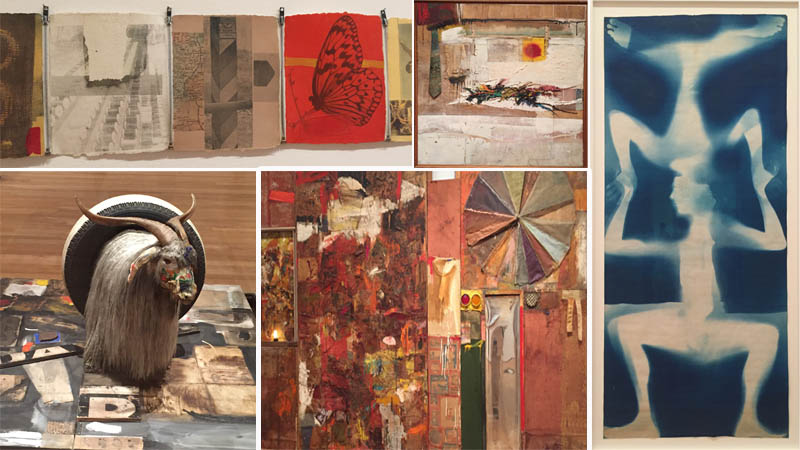 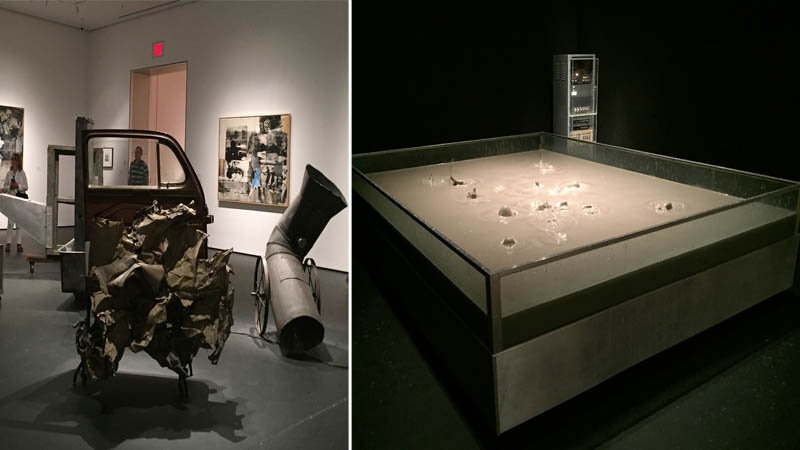 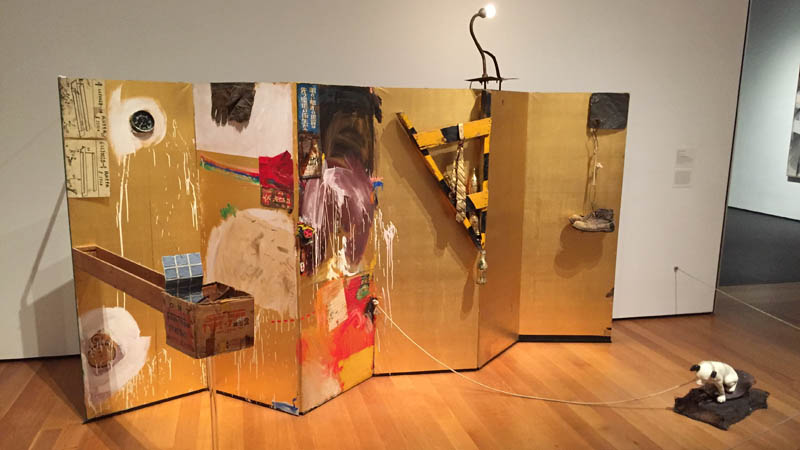 The writer can be reached at smt2104@caa.columbia.edu