What has brought Turkey closer to Iran?

The world is changing fast with new alliances being formed, many nations are going through a phase of strategic realignment. Pakistan is also engaging itself with new partners and allies. If Turkey and Iran, despite their divergence on many issues, converge on a common agenda, why can’t Pakistan and Iran?

In the recently concluded visit of the Turkish President Recep Tayyip Erdogan to Iran, Turkey and Iran reaffirmed their political will to strengthen bilateral and multilateral cooperation. Both the countries showed convergence over regional issues especially the unity and territorial integrity of Syria and Iraq, the issue of Kurdistan Regional Government (KRG) referendum for independence, Palestine, Myanmar and Afghanistan.

In the recent past, Iran and Turkey — the two major regional powers in the Middle East — have been at odds over the Syrian crises – the major bone of contention between the two nations. Iran supports the Syrian President Bashar Al-Assad while Turkey supports the opposition rebels with regime change as the major objective of Ankara in the past.

With the defeat of so-called Islamic State (IS) in Syria and Iraq, the strategic balance has been shifted in favor of Bashar and his allies. The Kurdish fighters of Popular Protection Units (YPG) have been able to consolidate their gains against the IS in northern Syria near the Turkish border and demanded for autonomy within the Syrian borders prompting Syria to respond positively to this demand as the Syrian foreign minister said Damascus could sit with the Kurds and listen to their demands once the Islamic State (IS) was defeated.

Turkey facing a decade-long Kurdish insurgency at home perceives the Kurdish problem at its borders as a far greater threat than the IS. Especially as the truce between the Turkey and the Kurdistan Workers’ Party (PKK) finished in 2015. This has made Turkey bring dynamic transformation to its policy on Syria shifting from a regime-change to regime-reform focusing on neutralising the Kurdish threat at its borders.

The policy-shift on Syria has brought Turkey closer to Iran and Russia — the staunch supporters of the Assad regime on military, political and economic fronts — with a possibility of Iran, Turkey and Russia forging a regional alliance for broader cooperation in the area of regional security. With Russia and Iran onboard, Turkey can handle the issue of a decades-long Kurdish problem at home as well as at its border with Syria better, where Kurds want an autonomous government within Federal Syria. Turkey, on the other hand, can help Iran and Russia in their fight against the IS and other opposition rebel’s groups fighting the Assad regime in Syria.

Around a total of 30 million Kurds — the fourth major ethic majority in the region — are spread across Iran, Iraq, Turkey and Syria; 15 million in southeastern Turkey, 7-8 million in northwestern Iran, 6 million in northern Iraq and around 2 million in northern Syria. Iraqi Kurds got autonomy in 1970 and formed Kurdistan Regional Government (KRG) which was later reconfirmed in 2005 as an autonomous entity within the federal Iraqi republic.

The KRG has just recently held an independence referendum for Iraqi Kurdistan where an overwhelming majority voted in favour of independence. However, the governments of Iran, Iraq and Turkey all have rejected the referendum. Iran stopped flights to Erbil and Sulemania airports while Turkey has threatened to stop the flow of oil to Iraqi Kurdistan along with military action and economic sanctions

The KRG has just recently held an independence referendum for Iraqi Kurdistan where an overwhelming majority voted in favor of Independence. However, the governments of Iran, Iraq and Turkey all have rejected the referendum. Iran stopped flights to Erbil and Sulemania airports while Turkey has threatened to stop the flow of oil to Iraqi Kurdistan along with military action and economic sanctions.

Both Tehran and Ankara believe that push for an independent Kurd state could motivate similar movements in Iran and Turkey. Eurdogan linked Israel’s Mossad to Kurdish referendum while Rohani called it a ‘foreign sectarian plot’. The Iranian supreme leader Ayatollah Ali Khamenei went on to say that the US and western powers were seeking to ‘create a new Israel’ in the Middle East. The US did not support the referendum saying it lacks legitimacy and expressed their support for a united Iraq but Israel publicly supported the Kurdish bid for an independent state as it will give it leverage against a resurgent Iran in the Middle East. Establishment of an independent Kurd state would help pave the way for dividing the Middle East along ethnic and sectarian lines — the original script of ‘The New Middle East Plot’. 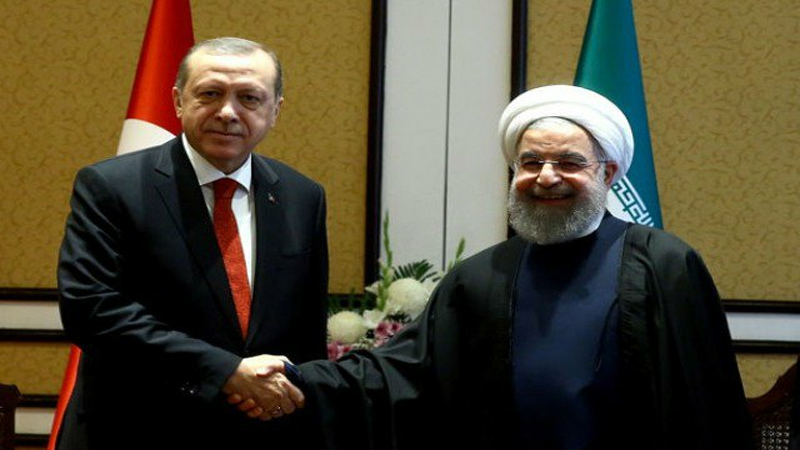 The alleged US involvement in the failed coup in Turkey and the US support for the Syrian and Iraqi Kurds is the other reason that has brought Ankara closer to Tehran. The Syrian Kurds near the Turkish border were able to defeat the IS with American help prompting Ankara to take military action against the PKK affiliates across its borders with Iraq and Syria.

The struggle for post-Arab Spring regional order by the Saudi-Emirati-Egyptian axis has generated anxiety in both Ankara and Tehran. The most obvious manifestation of this struggle was evident during the latest Gulf crisis. Both Iran and Turkey see this confrontation between Qatar and the Gulf-Arab coalition in the overall regional context. Turkey and Iran both opposed the Saudi-led block’s moves against Qatar.

The new regional order with the support of the Trump administration and Israel see political Islam as an enemy forcing them to close cooperation and struggle for a regional order detrimental to their common interests.

Iran and Turkey both aspire to lead the Islamic world and have been rivals in the past. Both mentioned Palestine, Afghanistan and Myanmar in their joint statements showing that both countries share common concerns about Muslim countries.

The world is changing fast with new alliances being formed, many nations are going through a phase of strategic realignment. Pakistan is also engaging itself with new partners and alleys. Close cooperation with both Iran and Turkey could help Pakistan’s national interest. If Turkey and Iran despite their divergence on many issues converge on a common agenda, why can’t Pakistan and Iran?

The writer is a journalist & analyst based in Islamabad. He tweets at @kashifaliraza and can be reached at meetkashi514@gmail.com