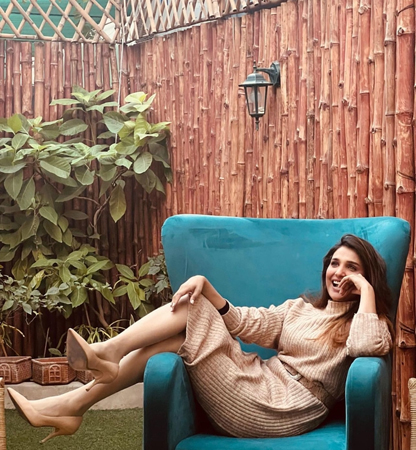 The viral pictures, which have thousands of likes on the visual-sharing application Instagram, showed her for the camera in a beige-coloured dress.

She was standing in one of the three pictures. She was sitting on a couch in the remaining clicks.

Netizens wrote heartfelt comments to praise her pictures and looks of the ‘Zinda Bhaag’ actress.

With 715,000 Instagram followers and counting, Amna Ilyas is one of the most sought celebrities in the showbiz industry. She posts pictures and videos of her personal life and professional endeavours to captivate her Instagram followers.

Previously, she won hearts with pictures of her in a white outfit. Moreover, her clicks in red and blue attire were a hit also.

Amna Ilyas, on the acting front, has worked in dramas and films ‘Dil Nahi Manta,’ ‘Jhanka Taaki’ and ‘Zinda Bhaag.’